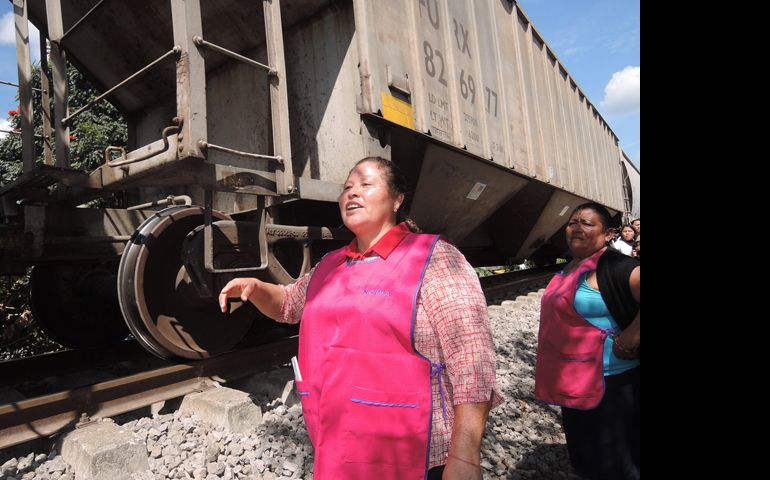 La Patrona, Mexico — Norma Romero Vasquez watched a freight train roll by her residence on a recent Saturday, and she checked to see if any migrants were perched on top.

"There's one," she yelled, motioning for a friend farther up the line to pass food and drink to the lone rider.

The migrant, sunburned and wearing shorts and a hoodie, grabbed the bagged lunch with an outstretched hand. He was the only one to pass that day.

It's drastic decline from six months earlier, when hundreds of Central Americans huddled aboard northbound trains in attempts to reach the U.S. border.

Nowadays, "they're mostly arriving on foot," said Romero, whose team of 14 women, known as "Las Patronas," still serve them and even offer a spot to sleep.

For 20 years, Las Patronas have tossed meals to migrants riding atop trains passing through their hamlet of cane and coffee farmers in Veracruz state, 175 miles southeast of Mexico City.

Las Patronas named themselves for their hometown -- La Patrona -- and Our Lady of Guadalupe, the national patroness. The women started out with scant resources, but their work has won national awards and international attention. Their work also has contributed to changes in attitudes toward migrants in Mexico, where people have not always welcomed their southern neighbors, despite the fact that the country sends so many its own citizens to the United States.

"There are more people aware now ... that a migrant is not a person coming here to do harm. It's someone who is trying to get ahead and help their family," Romero said, adding that some of those riding the rails will contact her after arriving to give thanks -- even though they never met.

"They look for us and ask, 'Why would you give us something to eat?' I always say to them, 'Because you're my brother.' "

Priests and religious attending the Feb. 14 20th anniversary celebration called the women examples of Christian charity and compassion, who always shared what they had, even in times of hardship.

"They're a reference, when speaking of migration and service to migrants," said Fr. Prisciliano Peraza Garcia, director of a migrant shelter in Altar, near the Arizona border.

"These people know that what little they have, they have to share it," said Bishop Raul Vera Lopez of Saltillo, who celebrated an anniversary Mass along the railway lines in La Patrona. "The solidarity that exists between the poor is something extraordinary."

After the anniversary Mass, the women cut cake and answered a crush of requests from reporters -- such is the sensation of 14 peasant women who have become minor media celebrities in Mexico.

Las Patronas started in 1995, when Romero recalls being asked by migrants walking the railway lines for food, though she confessed not knowing anything about migration and confused the people atop the trains with joyriders. The opportunity to serve migrants, she said, was an answer to prayer.

"I said, 'Please show me the road so that I can serve you,' " she recalled praying.

The women prepared meals in pots over open flames and passed out bagged food to outstretched hands. When food was hard to find, the women picked mangos.

Their work started being noticed, leading to donations from students, universities and local businesses, which would send over day-old pastries and bottled drinks.

Las Patronas won the 2013 National Human Rights Award, and Romero rebuked President Enrique Pena Nieto in person for a recently approved energy reform and an ongoing neglect of the countryside. But Romero downplays the attention she receives and credits her colleagues and God for their accomplishments.

"This project is not only mine. It's God's," she said. "It is not something we expected, but it completely changed our lives."

Changes in Mexican immigration enforcement are preventing migrants from climbing onto the northbound train -- known as "La Bestia" for the way it maims riders -- through a government initiative known as the Southern Border Project.

The initiative aims to make the southern border safer, according to the Mexican government, and establishes order in an oft-neglected part of the country. The plan was presented after the child migrant crisis last summer, when thousands of unaccompanied Central American minors tried to travel through Mexico to reach the United States.

"The child migrant crisis was a watershed moment," said Fr. Alejandro Solalinde, director of the Brothers of the Road migrant shelter in Oaxaca state, for the way it brought increased enforcement, along with detentions and deportations.

Critics, including Solalinde and the operators of Catholic-run shelters, say the plan makes migration more dangerous by forcing migrants onto new routes, where they are easily extorted or kidnapped by criminal groups as they attempt to avoid the authorities.

Solalinde sees most migrants now arriving on foot, with 90 percent reporting some sort of injury or having fallen victim to crime along the way.

Since the Southern Border Project was introduced, Franciscan Br. Tomas Gonzalez Castillo has seen only a minor drop in numbers arriving at his shelter near the Mexico-Guatemala border. But he has seen attempts by migrants to avoid the authorities and a new crop of smugglers starting to offer services -- even if they don't offer anything of value.

"We're receiving people that were lost in the jungle," said Gonzalez, director of the shelter La 72 in Tenosique, in Tabasco state.

The directors of shelters in southern Mexico recently discarded a policy of limiting stays by migrants to three days, "because they arrive extremely tired," Gonzalez said.

Honduran migrant Jose Daniel Sanchez Barahona, 18, arrived in La Patrona after walking most of the distance from Palenque, 375 miles away in Chiapas state. He said he once jumped off the train after criminals carrying baseball bats demanded $100 to stay aboard.

Many of the migrants traveling with him "turned themselves in to immigration officials," he said.

With fewer migrants riding the rails, Romero has shifted her approach. She opened a shelter to attend to those walking the railway line and arriving on bus and now feeds around 50 migrants per day on the trains -- down from the more than 1,000 meals Las Patronas used to prepare daily.

She plans to continue with her project, but hoped to see the day "people did not have to migrate."