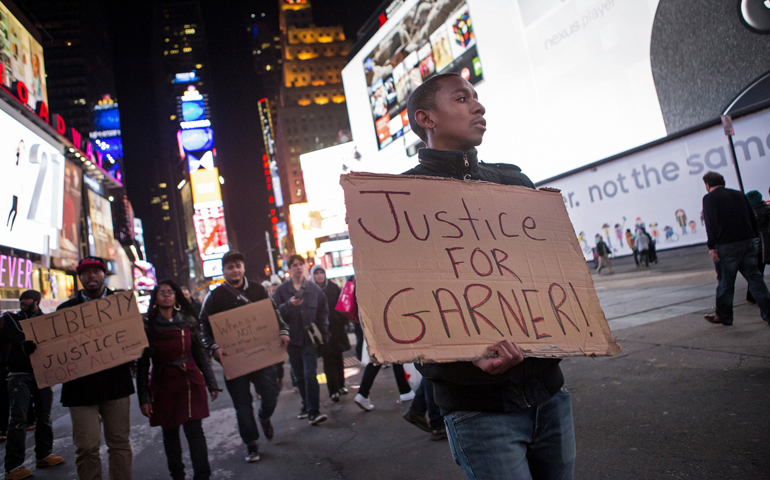 People protest the death of Eric Garner in the Manhattan borough of New York on Dec. 3, 2014. (CNS/Reuters/Eric Thayer)

Shortly after we entered the 21st century, the 24-hour news cycle bombarded us with interviews and images regarding a sex abuse scandal within the Catholic church. For a while, it seemed as though every day there was a new allegation of abuse dating back decades. Victim after victim emerged, sharing one heartbreaking story after another. Survivors Network of those Abused by Priests became the common understanding of the word "SNAP."

Then came our collective outrage as a society when we learned that priests (and deacons) accused of abusing children were never arrested, never turned in to law enforcement for questioning, never properly directed into the criminal justice system. Instead, they were shifted from parish to parish, their deeds covered up by bishops in personnel moves, their behavior hidden in a thickening cloud of secrecy. And once we knew about the efforts to protect the priests and not their victims, we as a society wondered, "How could this happen?"

I see parallels between the sex abuse scandal in the Catholic church and the slow awakening we are witnessing throughout the country about the realities of police violence against people of color. Names like Michael Brown, Eric Garner, Tamir Rice, Tanisha Anderson, Freddie Gray and Sandra Bland have reached the national and, sometimes, international news, but names converted into hashtags pepper social media every day, and the numbers steadily rise in "The Counted," The Guardian's tally of people killed by police in the United States.

According to The Guardian's method of calculation, the number is expected to reach 1,100 before 2015 ends, with African-Americans twice as likely to die as whites and Hispanics or Latinos. Like a growing survivors' network, people of color share their experiences with police violence, threats, harassment and other traumatic encounters in the comments section of these national stories and on their personal pages. Even if the encounters are not physical, these civilians describe fear they will never forget.

And what happens to police accused of -- or, as the media favors, "involved in" -- these killings and assaults? On Twitter, activist Bree Newsome recently asked, "Have they arrested the cop who assaulted the teenage girl at the pool party in #McKinney?" and "Have they fired the cop who assaulted & falsely arrested #SandraBland?" (Newsome is perhaps best known for telling white supremacy, "I come against you in the name of God!" as she climbed the flag pole at South Carolina's state Capitol and stripped it of the Confederate battle flag last month.)

Former McKinney Police Cpl. Eric Casebolt, who is white, resigned after manhandling a thin, bikini-clad, African-American teenage girl, pulling her hair, throwing her to the ground and pushing her face into the dirt while he knelt with his knee on her back. He also pulled his gun on other teens coming to her defense. As another Twitter user pointed out, because Casebolt resigned, he can apply for another job as a police officer with another force without having to state that he was terminated. He was only under investigation.

Eric Garner's killer is still with the NYPD. Only the medics who did not attend to him have been fired. After resigning from the Ferguson Police Department and entering a newly married life after shooting Michael Brown, Darren Wilson said he hopes to teach other officers about the deadly use of force. Cleveland Police Officer Timothy Loehmann, who is still employed after shooting 12-year-old Tamir Rice, was terminated from a previous job as a police officer for emotional instability and turned away from many other forces, but Cleveland failed to check his personnel records. Brian Encinia, the officer who falsely arrested Sandra Bland, sits at desk duty. The Waller County sheriff who supervises him was fired from a previous job as police chief because of numerous complaints against him of racism.

Like priests who were shuffled to different parishes to cover their abuse, these law enforcement officers are shielded by personnel decisions that don't require they be held accountable for their actions. Taxpayers pay survivors of police abuse in civil lawsuits, but the officers continue working as if nothing happened. As someone who generally supports unions, I want to say that paid administrative leave is the best possibility as an investigation into a "police-involved shooting" or other killing takes place, but it seems unreasonable when someone lost her or his life and when I know that criminal charges or any type of discipline against police are rare.

In both the case of the church sex abuse scandal and stories of police terrorism largely against people of color, officials with authority and power who are expected to be held to a higher standard are privileged over victims and survivors. These officials receive a clean slate. They are transferred to a new community where their pasts are unknown and where their predatory ways can continue. Though the John Jay Report estimated that "4.0% of all priests active between 1950 and 2002 had allegations of abuse" and police violence often is attributed to a few bad apples, the problem in both cases is not individual, but systemic. And as members and nonmembers of the Catholic church demanded justice and action, all Americans must demand systemic change in law enforcement, particularly in how police interact with people of color.

All Americans must also believe victims and survivors. I have yet to find a story where someone who claims to have been a victim of a priest's abuse in the past is not believed today, but for some reason, there is always something a victim or survivor of police terror could have done differently. This, too, must change.