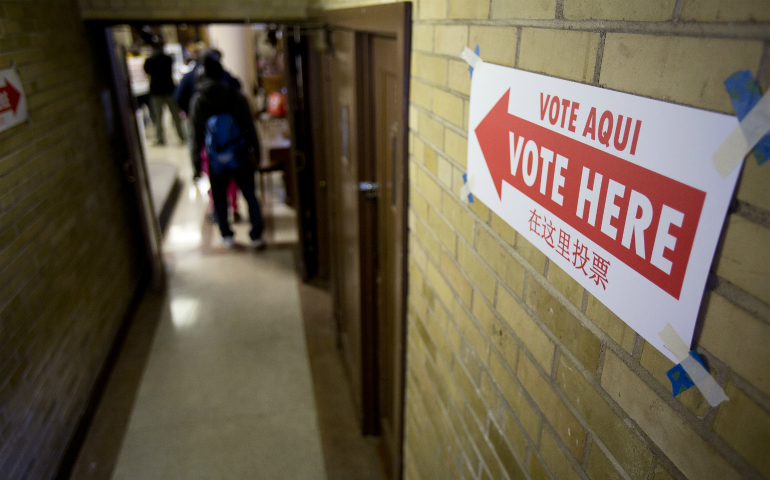 I thought that in this column, I would be speculating on how the election of the first woman president would influence what may really be the last remaining glass ceilings in our culture: the ordination of women in the Catholic church and in all Protestant denominations in which it is still not allowed.

Alas, this is not that column. Instead, I'm thinking about people who are Jehovah's Witnesses.

After I voted on Nov. 8, I went to the grocery store. Jehovah's Witnesses frequently stand outside of this particular store, handing people literature about their religion and attempting to engage them in conversation. As I left the store, I remembered a conversation I had — in Spanish — with a woman in my Spanish class when I was an undergrad and preparing to vote in my first presidential election. The woman told me she was a Jehovah's Witness and that Witnesses believe that because God is sovereign and in control, God will always choose the right leaders. There is therefore neither reason to vote nor to worry about the outcome of elections.

I saw the Jehovah's Witnesses last week with their display of brochures and pamphlets set up between the sidewalk and the grocery store, and thought to myself, "They must feel so at peace right now."

God is sovereign. God is in control. It's a sentiment I saw Christians of various denominations express on social media Tuesday night, but it's one that gives me no comfort. As I said in a previous column, I am afraid that "Trump's violent rhetoric and sexually aggressive, hyper-masculine, entitled behavior has given the white men who would vote for him permission to return to openly expressing a craving for power and a sense of entitlement that is dangerous to anyone who isn't a white, heterosexual man, or who doesn't identify as such."

Though Hillary Clinton certainly has been accused of racism (remember "super predators?") and was more timid on issues of race during the campaign than I would have liked, she expressed an understanding of her wrongs, a willingness to grow, and an abhorrence for outright hatred that Trump never showed. As other commentators have expressed, I fear that his election to the most powerful office in the world — despite his racist, anti-Muslim, anti-immigrant rhetoric, despite his sexual assault bragging, despite his consistent disparagement of women, despite his making fun of people with disabilities, despite encouraging violence against people of color at his rallies — will solidify the perception that race, gender, or sexuality-based violence are okay. In fact, reports of hate crimes have already begun. I'm afraid Trump was elected not in spite of all that he said and did, but because of all that. I'm afraid of experiencing physical, bodily harm that African Americans came to expect after Reconstruction, when a black person was lynched an average of every four days.

God was sovereign and in control then. And during the entire Transatlantic Slave Trade. And every time a black woman's child was sold out of her hands. And on the Trail of Tears. And when Emmett Till was beaten to death. And when a white supremacist shot nine people in their church, after Bible study, in 2015. And when Christ was crucified. God being sovereign and in control has never stopped bodily suffering or torture to the point of death, a level of suffering that, we should note, even Christ prayed to avoid.

So, I'm not going to do that. I'm going to acknowledge my anger, disappointment and fear, pray about what role I, a social justice writer whose message clearly isn't reaching people, am supposed to play in this world and keep the faith.