My students need love as much as they do poetry 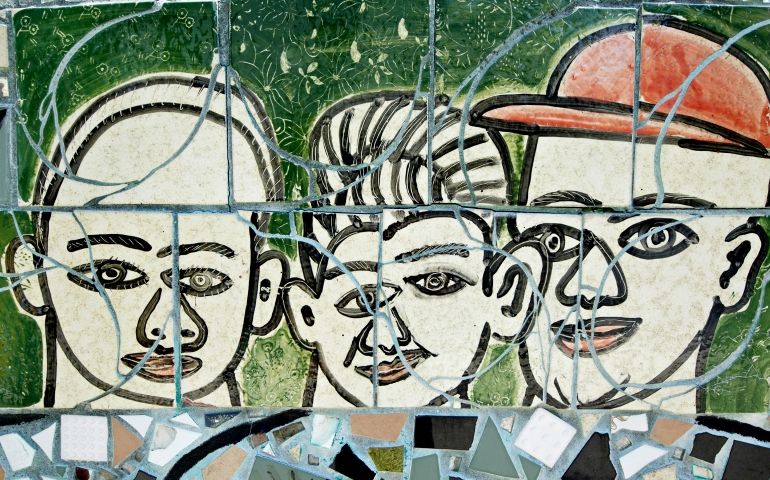 Street art of young people on a wall in Philadelphia (Dreamstime/David M. Sacerdote)

In the Christian circles I frequented in college and throughout most of my 20s, we used to warn each another, somewhat facetiously, to be careful asking God for patience or to teach you how to love, for the only way to learn these things was to encounter situations that would try your patience and people who were difficult to love.

This past school year as a teaching artist has been like an answer to those prayers, though I don't recall having made the request in nearly a decade. I've been teaching poetry, or attempting to, to freshmen in a public school in Philadelphia. I had hoped for and received an assignment to teach high school, recalling how much I disliked middle schoolers, even when I was one, and how I wanted to be able to have more thoughtful discussions about various issues than I was able to when teaching elementary school last year.

I had forgotten how challenging a child's ninth-grade year — adjusting to a new school, trying to find where they fit in, appearing awkward, morphing themselves into whomever their surroundings demand they be at a moment's notice — can be. And though I knew where the children lived — my neighborhood — and knew what studies say, I also had not anticipated how living in the 'hood compounds the challenges of adolescence.

The week after spring break, my co-teacher had the idea to ask the students to write down on an index card one interesting or random thing that happened over spring break that no one in the class knew about. She collected the cards, shuffled them, and then read the contents of each one out loud, allowing students to guess whose adventure was whose.

I'm not sure what we expected, but I know we didn't predict what we got. One student witnessed a shootout at a gym. One's boyfriend got a pass home from jail. One found a sugar daddy. One child's brother was shot and killed.

It is these types of stories that confirm to me my students need love as much as they do poetry. When I think of love in terms of action rather than feeling, it doesn't require a radical level of effort. It means showing up every time I'm expected. Altering on the fly an activity they're not into. Not giving up and walking out when they're really not into it, no matter how much I want to.

One day, when my co-teacher entered the classroom before I did, the students said the other teacher "must've given up on us." They were convinced I wasn't coming back. They seemed pleasantly surprised when I came in.

"I kept telling you she was just in the bathroom," my co-teacher said to the class.

I know some of them have bounced from school to school, parent to parent, home to home. They are defensive, abrasive, loud, insubordinate. They sleep during lessons. Most of their goals center on "honeys and money." Most of our ideas they consider corny. Almost half of them would sooner fail the class than accept the extra credit the teacher offers for participation on poetry. Some days their actions and choices are as unfathomable to me as those of a lesbian Muslim immigrant who voted for Donald Trump.

It's hard to like people you can't relate to. While liking someone is not a prerequisite for acting toward them in love, I do think it would make loving them, and most definitely having patience with them, easier.

I wonder sometimes if Jesus liked everyone he loved. I don't think so. Sometimes, I don't even think he liked the 12 disciples following him everywhere. "Are you still so dull?" he asked them too many times to count. Probably the nicest way of saying, "How many times do I have to explain this to you? I'm breaking down parables, and you still don't know what's going on."

He'd wander away, trying to be by himself sometimes. To me, this indicates that even if Jesus liked the folks surrounding him, they still got on his nerves. But he had compassion on them and stuck with his mission.

Getting to the point where I like all of my students may not be possible in the time we have remaining, but I'm capable of sticking with it, of showing up, because I know they deserve love.

[Mariam Williams is a Kentucky writer living in Philadelphia and pursuing a Master of Fine Arts in creative writing at Rutgers University-Camden. She is a contributor to the anthology Faithfully Feminist and blogs at RedboneAfropuff.com. Follow her on Twitter: @missmariamw.]

Spirituality | My students need love as much as they do poetry

Book explores how poetry scratches at the door of transcendence