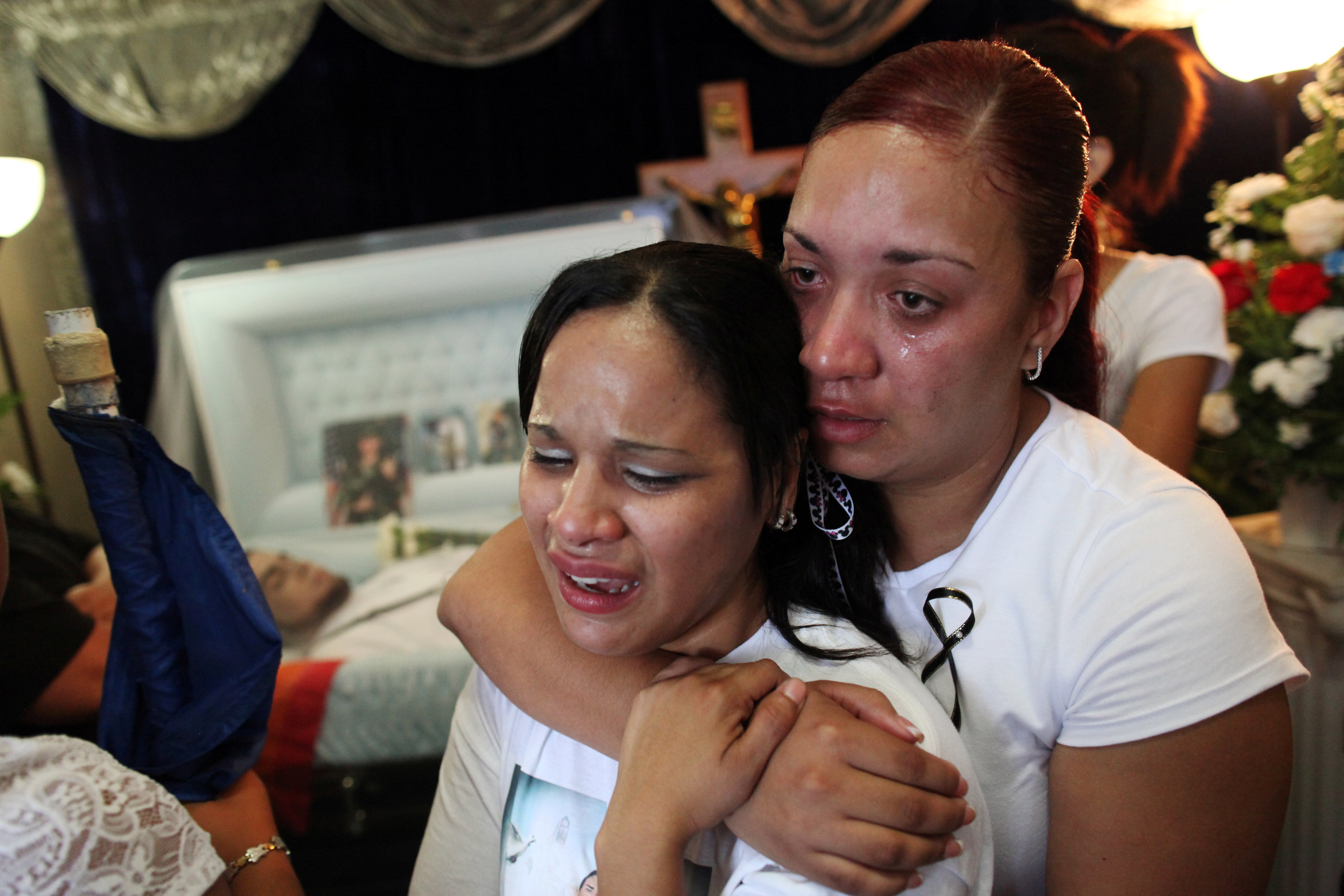 Women cry near the body of Angel Candelairo Padro during his wake June 17 in his hometown of Guanica, Puerto Rico. Candelario was of the victims of the June 12 mass shooting at the Pulse nightclub in Orlando, Fla. (CNS/Alvin Baez, Reuters)

This time last year, I was thinking about the alleged Christian duty to forgive in the wake of the murders of nine worshipers at the historically black Emanuel African Methodist Episcopal Church in Charleston, S.C. This year, two weeks after 49 people, most of whom identified somewhere along the LGBTQ spectrum and were Hispanic or Latino and young, were murdered in a mass shooting at Pulse nightclub in Orlando, Fla., I'm meditating on the process of moving on.

I debate whether to call it the "process" of moving on or the "act." Returning to work uninterrupted by sobs and waves of grief, visiting again that restaurant you and someone no longer here always used to go to, passing that bench in the park where that same someone did something seemingly insignificant like laugh at your stupid joke, not breaking down upon entering the classroom where they taught or learned with you -- all of these signify that life goes on, that a return to normalcy has occurred.

They tend to happen so quickly after death that it's hard to imagine there was anything between tragedy and moved-on. The latter is more like an action the grieving take or a performance they star in for the benefit of those who did not experience the tragedy directly, on whom things like the assassination of nine people or of 49 people have little to no impact.

It's been two weeks since Orlando, and news coverage has returned to "normal" atrocities and politics (which also might be an atrocity). Congress debates gun control as the names and stories of people our laws failed to protect have disappeared from journalists' conversations. The same names and stories have slipped from public consciousness, too; a poetry reading last Wednesday night was the first public mention of "Orlando" or "Pulse" I had heard in at least a week.

June 17, the anniversary of the Charleston massacre, came and went with little fanfare, but something in a roundtable with families of survivors printed in The New York Times caught my attention. They expressed something I suspect falls between disappointment and disgust when they talked about how quickly the church reopened after the shootings. Their loved ones were murdered on a Wednesday night. Emanuel had reopened its doors for services Sunday morning.

I might say the surviving family members (and some church members) were heartbroken at this act of moving on. A span of four days left no time for process, and yet, for church people, the quick move-on is expected.

As I read the families' statements, I thought about how often I would hear and see widows, widowers, daughters, sons, sisters, brothers and grandchildren praised for coming to church a few days after they buried someone they loved. From the pulpit, they would hear it was good of them to be like David. When his first child with Bathsheba fell sick, David put on sackcloth, fasted and pleaded with God to let the child live. When the child died, David put on his normal clothes, went to the house of the Lord and worshiped. Then he sat down and ate.

Since the story is biblical (and it's David), no one questioned David's response or the praise for emulating him. But the truth is, there's more than one way to grieve, and there is never a return to normalcy. Rather, there is the creation of a new normal.

As we move on after yet another mass shooting, I've started to wonder how Christian people -- praying Christian people who petition God on behalf of the families who have lost someone -- can not move on so quickly, not encourage the performance of healing and normalcy, but rather acknowledge the process of reinventing "normal."

I wonder how often we forget that families are grieving and that the places their loved ones touched will never feel the same to them. I think about how often we shrug helplessly as laws -- and sentiments like racism and homophobia -- that allow and even encourage these tragedies to happen remain unchanged.

We put on our clothes, eat and go to the house of the Lord as though the fight were over, when, really, it may never end. We should accompany our fasting and praying with continued acts of love and care for grieving families, and we should take action by educating ourselves, appealing to lawmakers and condemning verbal and physical acts of violence against women, people of color, and people who are gay, lesbian, bisexual, transgender or queer, until something changes.