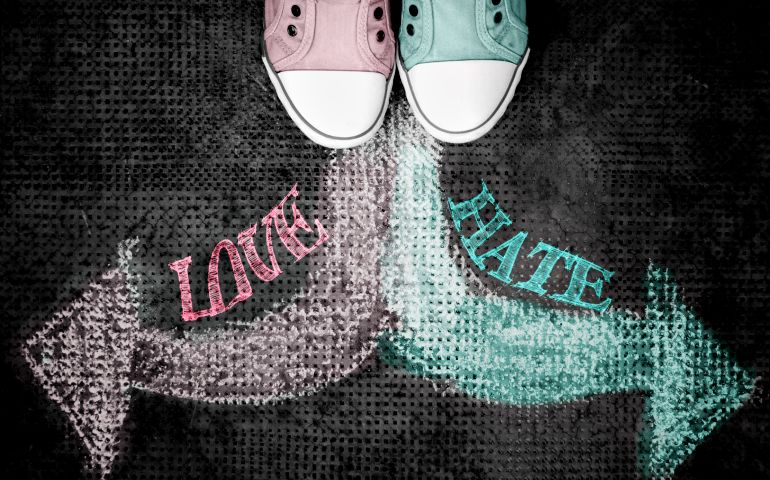 I've been thinking a lot lately about hatred. Though it's contrary to my religious beliefs, I do hold hatred for a select few people. I know I hate someone when I believe they are a waste of oxygen or when I believe the world would be, or would have been, better served without their existence. Bin Laden was one of those people. The majority of antebellum overseers, slave traders and slaveholding landowners are another. The father of a former colleague falls into that category, too, as do most other child molesters. This colleague's father abused his wife and son brutally, for decades, without remorse.

Our response to threats is evolutionary. We run away or we fight to defend ourselves. I witnessed the fight-or-flight adrenaline response to a threat when a cousin of mine turned 1. I gave her a birthday card. When I attempted to hand her the card, still in its envelope, she eyed it  suspiciously, withdrew from it, and when my hand didn't move away, she punched the envelope. She was sick with a bad cold on her birthday, but she was so afraid of a thick piece of paper, something very unlike herself, that she reacted violently to its presence.

I see too many adults reacting to difference the same way my 1-year-old cousin did, and even though I can relate their reactions to something very familiar to me and even identify the physiological and psychological processes behind them, I don't understand these responses. I don't understand some men's impulse to beat men who show affection for other men or to attack women who express the fullness of their humanity by demanding equality. Though I've been on the receiving end of the stare white babies hold the first time their fully-functioning eyes land on a black person, I don't understand how such a child could grow up convinced he or she must annihilate black people.

How should we react when we encounter something or someone so different from anything we know that it generates the fight-or-flight response in us? I'm sure there's more than one way, but for one possible answer, I offer my story of meeting someone I'll call Alex. I met Alex in a week-long writing workshop, and the first thing they said about themselves after their name was, "I'm gender variant, and I prefer the pronoun they, but everybody usually keeps using 'she.' I'm used to it so that's okay." I had never met a person who identified as gender variant before. Even more confusing: Alex looked like a woman and used the woman's restroom. I wasn't quite sure what gender variant meant, but it was clear that being gender variant was important to Alex, because they wanted us to use the pronoun "they," not "she." So I tried to respect Alex's wishes and refer to them as "they/them." After trying it in my head a few times, I realized I was going to mess it up, so when talking about Alex's work, I referred to Alex as "the narrator," which you're supposed to do in writing critiques anyway, and I avoided talking about Alex, which eventually would have required a pronoun. I talked to Alex and used their name or "you."

Even now, using they/their/them is hard. My brain is wired to the rules of the English language; it takes a conscious effort to refer to a singular person who looks female as "they" rather than "she." Though Alex really didn't ask anyone to try to honor their identity that first time it was merely mentioned, I was annoyed. In my private musings, I said, "Great. I have to fight against the wiring of my brain because this woman doesn't like what her genitalia and breasts say to the world about her. Why do I have to change? Why can't she just be normal?" Now I think, "Why was I whining, even in private, about a simple, not-even request but assertion, that did no harm to me?"

I didn't hate Alex. I didn't make fun of them. I didn't lash out against them in word or physically. It never occurred to me to do any of that. After the workshop, I didn't end up calling Alex a friend beyond the Facebook definition of friendship, but I respected them, their work, and I tried to honor what was important to them, even though they had given everyone a pass.

Why is someone's assertion of who they are and a basic right to be respected a reason to hate them? When is it an affront to who you are or a threat to your very existence? I suspect those who really search for answers to these rhetorical questions will be as puzzled by hatred as I have been.

Editor’s note: We can send you an email alert every time Mariam Williams’ column, At the Intersection, is posted to NCRonline.org. Go to this page and follow directions: Email alert sign-up.