Unity starts with your own 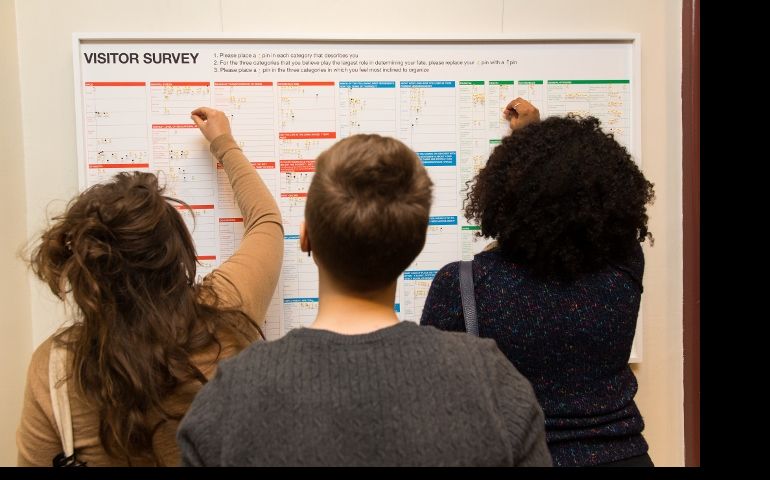 Visitors at the "Organize Your Own" opening at Kelly Writers House pin descriptions of themselves and their organizing activities. (Paul Gargagliano)

The Gospel of John proposes Christ's last spoken prayer before his arrest and subsequent crucifixion. Because he is on his way to a painful death, his words in the garden of Gethsemane often are interpreted as a dying leader's final directives and deepest desires for believers. They are not only prayers, but also instructions followers should pay close attention to.

One of the most discussed imperatives is Jesus's plea that all future disciples "may be one … that they may be brought to complete unity." A close reading of the text reveals Jesus was hoping for something that did not yet exist, and that he expected something outside of believers to make it happen. He didn't pray that his future disciples make themselves one, that they bring themselves to complete unity. Using the passive tense, he prayed that they be brought there.

His prayer in the garden stands in sharp contrast to what we've come to know as the great commission. In Matthew 28, Jesus uses active verbs: go, make, teach. And when Luke recounts the scene in Acts 1, what is essentially the same command -- "you will be my witnesses" -- reads as both a prediction about how the disciples would go about the work of spreading the Gospel and guidelines for how future believers are to do the same.

Jesus tells his disciples that after they receive the Holy Spirit, they will be his witnesses "in Jerusalem, and in all Judea and Samaria, and to the ends of the earth." I've often heard this section of the command interpreted as a map for the order in which believers are to proselytize. Before going all over the world, and even before going to nearby places full of people who don't look like you or you don't necessarily get along with, you should start at home. Start with your own.

Believe it or not, Stokley Carmichael, one of the most well-known leaders of the Student Nonviolent Coordinating Committee, or SNCC, gave a similar directive and map in a 1966 New York Review of Books article titled "What We Want":

One of the most disturbing things about almost all white supporters of the movement has been that they are afraid to go into their own communities -- which is where the racism exists -- and work to get rid of it. They want to run from Berkeley to tell us what to do in Mississippi; let them look instead at Berkeley.

The white students who had joined SNCC and other white supporters who had left their homes to teach at Freedom Schools in the south and organize black residents to register to vote were believers in the civil rights movement. They were doing a noble thing -- doing God's work, I would say -- by spreading a gospel of freedom and equality. The danger they faced was made plain by the murders of Michael Schwemer and Andrew Goodman, the two young white men from New York who had traveled to Mississippi in 1964 to volunteer during Freedom Summer. Members of the Ku Klux Klan assassinated Schwemer and Goodman alongside James Chaney, a black Mississippian and local organizer for the Congress of Racial Equality. The contributions and sacrifices of white activists in the movement are not to be downplayed or overlooked.

Nonetheless, when they left their homes for the south, white activists were leaving communities that needed to be organized against racism. People in those communities needed to hear a gospel of freedom and equality. They needed to be made aware of their wrongdoing, be called to repentance for it, experience a change of heart, ask for forgiveness, and continue doing the work required to maintain their change and to grow in relationship with others. They needed a conversion experience.

I've been thinking about this theme of starting with your own since I began working on a multi-city exhibition and event series called "Organize Your Own: The Politics and Poetics of Self-Determination Movements." Curated by Daniel Tucker and funded by the Pew Center for Arts and Heritage, the project includes a gallery exhibition at Kelly Writers House in Philadelphia, performances and panels, plus digital art, stories and music in special projects online. "Organize Your Own" will be showing through February 17, 2016. On March 3, the exhibition will open in The Averill and Bernard Leviton Gallery in Chicago.

Artists and organizations who produced work for the exhibition were asked to consider what organizing your own means in the 21st century. I'm working on the project as a docent, and I'm also trying to gauge how visitors to the exhibition and events interpret the call for themselves.

There is no overtly religious component to the project, but I think it's critical for people who consider Christ their savior to think about how to organize their own communities against racism. While many of us grieve a highly segregated Sunday morning, a homogenous congregation offers an opportunity to ask, "Why is it like this? What work have we not done to end racism? How have we perpetuated it? Does racism exist here?" The conversation will be at least as uncomfortable as a talk between a missionary and an atheist, but it's a necessary step towards complete unity in the body of Christ, and a crucial step towards a world in which black people and other persons of color can live without fear.

Justice | Unity starts with your own

At migration summit, bishops commit to work toward 'church without borders'

Is nonviolence a solution to all the world's conflicts?