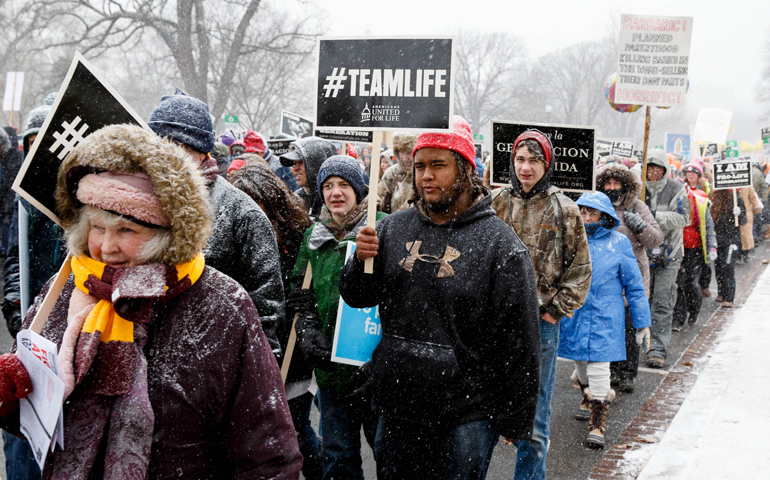 Pro-life supporters walk in the snowfall up Constitution during the March for Life Jan. 22. (CNS/Gregory L. Tracy, The Pilot)

I think when thousands of folks go to Washington and demonstrate as a blizzard moves in and then try to make it home, it's news. Major media seem to disagree.

I followed the news all weekend. I saw no real coverage of the 43rd Jan. 22 March for Life, before, during, or after the march or the blizzard.

I did see early news bulletins with New York City Mayor Bill DeBlasio, talking about snowplows and street parking. I saw mid-storm reports of New York Governor Andrew Cuomo hitching a stranded car near the Cross Island Parkway. For an entire weekend and then some, I saw officials in New Jersey, Pennsylvania, Maryland and DC talk about salt spreaders and dangerous road conditions, about closed schools and offices.

But I saw no coverage of the thousands (not, as the New York Times reported, "hundreds") of people who challenged both permissive abortion laws and the storm as they showed up noon that Friday near the Washington Monument. I saw no coverage of Republican presidential hopeful Carly Fiorina, nor of any of the other speakers. I saw no photography of the protesters near the Supreme Court.

I did catch a glimpse of post-march hundreds at a Mass celebrated on an impromptu snow altar -- they were stranded on the Pennsylvania Turnpike. The television commentator called it a "religious service," but made no mention of why busloads of young people and a priest from Iowa were out there during the blizzard in the first place.

Yes, here and there a local paper or station mentioned the events. But the March for Life itself and some very interesting sidebars got snowed under by blizzard coverage.

Why? What, exactly, is news?

Is news about what people are interested in? The fact is, the latest Marist poll shows 84% of U.S. citizens oppose unrestricted abortion, including two-thirds of the folks who call themselves pro-choice. That's a lot of people with significant opinions about the ways the Supreme Court's decision in Roe v. Wade has wormed its way into American minds and mores.

But a recent New York Times front-page story focuses on a Texas indictment of the folks who exposed the Planned Parenthood baby-part scandal, not on baby parts. Whether the couple broke the law or not they did get some very scary video.

Of course Texas has been an abortion battleground for years. Roe v. Wade grew from the 1969 denial--under Texas criminal law--of an abortion to Norma L. McCorvey. The U.S. Supreme Court decided the case in 1973, well after McCorvey gave birth. (She is now a pro-life Catholic.)

The newest Texas case, Whole Women's Health v. Cole, concerns state medical restrictions placed on the 19 or so remaining abortion facilities (there were forty not long ago), requiring they be outfitted as ambulatory surgical centers whose physicians have hospital admitting privileges not more than 30 miles away.

In fact, federal involvement in abortion law is very recent. The earliest abortion law, in Connecticut in 1821, prohibited abortion after "quickening." After 1840, more and more states legislated against it as abortionists, such as New York's Madame Restell, became both rich and famous. Restell became so well known that "Restellism" became a euphemism for abortion. But in the mid-nineteenth century, the topic was so inflammatory it was declared an obscene subject and newspapers rarely, if ever, discussed it.

Like today? The changing rhetoric over the years (pro-life is now anti-choice) and the increasing stridency of demands that women have the right to kill their own in federally-funded centers shouts down reasoned discussion of the real issues at hand. Further, the question is pigeon-holed as a woman's issue, as if the 60 million U.S. abortions since Roe v. Wade had nothing to do with men. Even Obamacare birth control discussion routinely omits one of the least expensive and most permanent methods of limiting births: vasectomies.

Snow melts and disappears. But discussion about abortion and the worldwide desire of millions of people to protect defenseless unborn children continue. That's news.