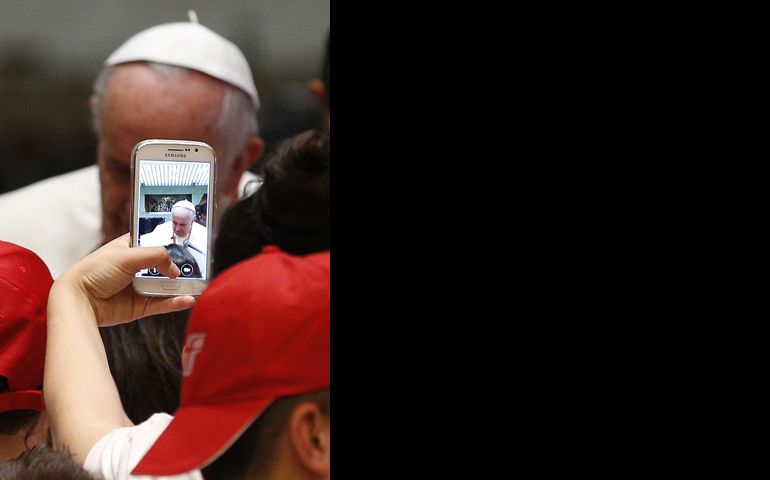 A youth takes a photo on a cell phone as Pope Francis meets children of Italian prisoners in Paul VI hall at the Vatican May 30. (CNS photo/Paul Haring)

The title here, cumbersome as it is, comes from Pope Francis' Laudato Si'.

His encyclical letter, in English called "On Care for Our Common Home" is widely reported as his statement on climate change.

But it's about more than just hurricanes and ice floes.

One caricatured response to what Francis wrote could be: agribusiness bad, organic farms good. But before you start planting maize in your back garden, take look at what else Francis wrote.

Look, and look carefully, against this backdrop: there are about 3.5 billion Internet users, and nearly two billion smart phone users on the planet. If you count 7.3 billion people as the world's population, consider the fact that about 6.8 billion folks have a cellular telephone account. The United Nations reports that even in the poorest countries nearly nine of ten inhabitants are, as they say, connected.

While billions are online at some level, hundreds of thousands are not. Internet users are mainly in the twenty richest nations.

The numbers of smart phone users and by implication the numbers connected to the Internet through them seem high, but recall if you will the videos of teenaged boys climbing around Nineveh texting and taking photos of storied treasures destroyed by the so-called Islamic State. Recall the omnipresence of flat black devices at work, in the mall, and at the last public meeting you attended. Recall that every tragedy, major or minor, seems to show up on Facebook or even national broadcast news thanks to smart phone video.

We all want to be connected.

There is of course the pedestrian need for access to whatever daily life insists on: Who won the soccer game? Can we download that movie? What is the weather forecast?

There are the needs of the world of business as well, where words and pictures move across continents in pursuit of profits.

But there is something else that goes with the electronic skein that winds thickly around us. We begin to re-think the real. In fact, the real becomes electronic. What we see and hear is what is real; what we do not see and hear does not exist.

Somehow, video is more "real" than the next door neighbor, and captures our attention to the decline of that or any other personal relationship. It is as if the flesh and bones human must be captured on a SIM card before his or her personal existence is verified.

To use the terms of philosophy: it is a collision course between epistemology and metaphysics. The problem is what we "know" electronically may not be "real," while the really real is hidden behind the electronic cloud.

And there are plenty of big corporations only too willing to help create that cloud. Two that come to mind, Amazon and Google, cause electronic tsunamis every day. Their end: more, better, faster, and bigger (or smaller) tools of technology or results of that technology.

The bottom line? The world is beginning to redefine relationships. How do we interact with each other? The point of Francis's encyclical goes beyond that. His challenge is: How do we relate to creation?

And when we try to talk about it, we get all tangled up in the language. What is a technocratic paradigm? Simply, the technocratic approach sees the human person as a mind-body machine. Francis says solely technological approaches to questions inevitably fail the human spirit. He is, of course, correct.

In the "technocratic paradigm" section of Laudato Si', Francis wrote that logic and science attempt to control nature and assert power over it, assuming an infinite supply of goods and materials and, not incidentally, people. Such supports an unhealthy economic ethic. He argues quite strongly: "There needs to be a distinctive way of looking at things, a way of thinking, policies, an educational program, a lifestyle and a spirituality which together generate resistance to the assault of the technocratic paradigm."

His namesake St. Francis would no doubt approve. In fact, the poor man from Assisi might indeed have written the pope's next sentence. We can imagine the saint joining the pope in saying that without resistance to the technocratic paradigm, "even the best ecological initiatives can find themselves caught up in the same globalized logic." Or, better, St. Francis would more simply say: machines are not the really real. God is. God's creation is.

The problem is how to preach that message without getting caught up in the technology that creates the need for it.

[Phyllis Zagano is senior research associate-in-residence at Hofstra University in Hempstead, N.Y. She will speak Sept. 19 at the Philadelphia Marriott Downtown. Her books include Mysticism and the Spiritual Quest: A Crosscultural Anthology and On Prayer: A Letter to My Godchild.]

World | The Globalization of the Technocratic Paradigm

EarthBeat Weekly: New Peruvian bishop shaped by 'the Amazonian face of the church'