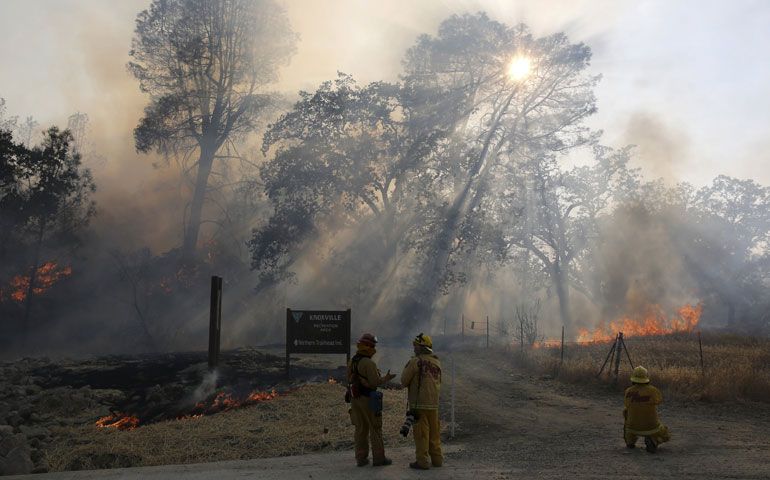 The national association for U.S. male religious has vowed more actions than words in taking up Pope Francis' global call for protecting the planetary home, hoping their recently passed resolution will lead not only to eco-conscious changes in their own congregations, but will serve as a model for other Catholic institutions.

The Conference of Major Superiors of Men, representing 210 religious communities and more than 17,000 priests, brothers and seminarians, passed the resolution Aug. 7 with 90 percent* approval at its annual national assembly, held this year in Charlotte, N.C.

"The Conference of Major Superiors of Men (CMSM) resolves to use both our individual charisms and experience as religious leaders in order to enter into the conversation on environmental degradation and to transform our practices to cherish all of creation, particularly responding to the urgent call for action on climate change," the resolution stated.

Specifically, the conference pledged "to put our words into actions" across nine points, among them:

"We're trying to dialogue, 'What can we do, how can we cooperate on this?' " said Glenmary Fr. Neil Pezzulo, a member of the CMSM justice and peace committee, where the resolution manifested. "Because there's an overall recognition that many of our activities and much of the way that we normally conduct our days and our businesses is absolutely unsustainable."

Though discussion of the resolution began more than a year before the release of Francis' encyclical "Laudato Si', on Care for Our Common Home," the document, once published in mid-June, provided a base. Of the final version's 13 citations, seven reference the encyclical.

"This is a positive and concrete way to accept and advance, in a proactive way, the challenge that Pope Francis has placed before all people in Laudato Si'," Fr. James Greenfield, CMSM president and an Oblate of St. Francis de Sales, said in a statement.

"Once we had the document in our hands, we realized this document is not only about climate change -- it's about a moral responsibility we have for each other and for the earth," Pezzulo added.

He referenced how mountaintop removal mining in Appalachia can lead to water contamination and respiratory issues through the particulates released into the air. The resolution also highlights "increasing wars over natural resources" as a threat to the climate and the planet, a point "vitally important" for the conference to make, said Eli McCarthy, justice and peace director.

While the resolution sets a course for future action, men religious have been engaged in efforts to lead sustainable lives. In recent years, Glenmary has weaned itself off plastic water bottles at their events and meetings. They have also explored how to work with Duke Energy to purchase all of their energy from renewable sources. The Missionary Oblates of Mary Immaculate have begun to install solar panels on churches and houses of their residences. Other congregations have committed to purchasing hybrid cars.

In addition, the resolution encourages congregations to review how their investments align with their commitment to creation. McCarthy said that includes divesting funds from fossil fuel holdings -- "without delay," he said, quoting Laudato Si' -- and redirecting them toward green companies, and collaborating among congregations to create new mutual funds based on those commitments.

He added that the Conference of Major Superiors of Men will encourage "key religious orders and investment companies" to make such moves "without delay," and work to facilitate greater dialogue between the justice/peace and finance directors within congregations.

Pezzulo said, "The finance people look at nothing but raw return. ... The justice person puts kind of a moral compass on the investment."

The primary impact of such financial shuffling, McCarthy said, "is signaling to Catholics in the U.S. it is time to make significant change in our behavior and to move our money in these directions as part of growing in our faith."

McCarthy acknowledged that while overwhelming support passed the resolution, a main challenge exists in overcoming "entrenched habits," whether in personal lifestyles or in historical financial behavior. The conference plans to track implementation through its biannual regional meetings for the first year before reviewing next steps.

The trick in the meantime, Pezzulo said, is to prevent the resolution from becoming "a paper tiger."

"I think it's going to have a tremendous impact on how we live our lives as religious and set the example for the people we serve," he said, before adding, "People watch their ministers, and they smell when there's inconsistency."

Editor's note: An earlier version of this story reported an incorrect percentage of CMSM membership approving the resolution.