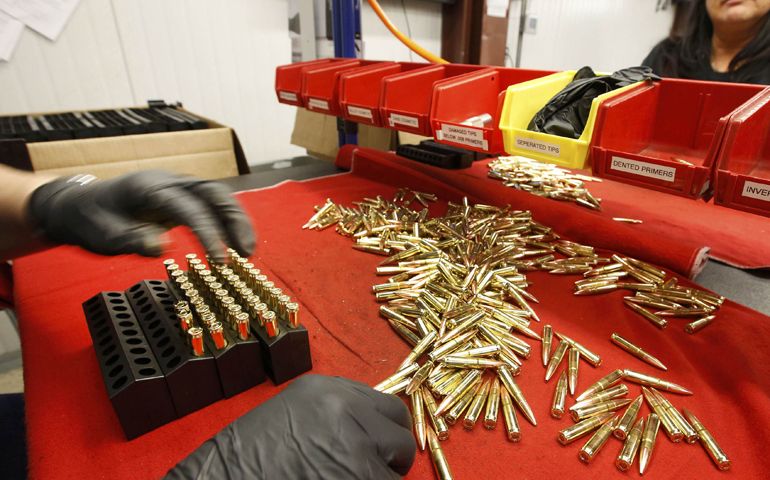 It's the worst mass shooting in modern American history.

With at least 49 people murdered as a result of gunshot wounds, and dozens more critically wounded, a gay/LGBT nightclub in Orlando, Fla., now has the sad distinction of being the site of the U.S.'s worst terror attack since 9/11.

The gunman, Omar Mateen, 29, was reportedly able to legally purchase an AR-15-style semi-automatic assault weapon with a 30-bullet magazine clip and a Glock semi-automatic pistol -- both used in the attack -- even though the FBI had twice investigated him for suspected terrorist ties.

Shortly after the San Bernardino, Calif., mass shooting in 2015, the U.S. Senate rejected legislation that would have expanded background checks for guns purchased online and at gun shows and also rejected legislation that would have prevented individuals on the terror watch list from purchasing firearms. Such laws would have likely prevented Omar Mateen from legally purchasing his murder weapons.

Furthermore, in 2004 a federal law banning many assault weapons expired. Congress has not passed a similar ban since then. Congress has let organizations like the powerful National Rifle Association -- with their millions of dollars poured into political campaigns -- to continue to influence them from enacting obvious common sense gun control measures.

Congress has even blocked funding to the Centers for Disease Control and Prevention, which would have researched the underlying causes of gun violence.

Posted on the Facebook page of "Parents Against Gun Violence" is this quote: "children and teens injured or killed by guns every year in the US: 7,000 – solutions enacted by Congress in the last twenty years: 0."

San Bernardino, Colorado Springs, Newtown, Fort Hood, Aurora, and now Orlando are just a few of the U.S. mass shootings sites in recent years. In fact, according to the British publication "The Guardian" during the same weekend of the Orlando shooting, there were five other U.S. mass shootings.

Mass shootings have become tragically common in the U.S. The Guardian reports that from Jan. 1, 2013, to June 12, 2016, there have been 1,000 mass shootings -- defined as four or more people shot in a single incident -- in America.

The Guardian reports that so many people die annually from gunfire in America that the death toll between 1968 and 2011 totals more people killed than in all wars ever fought by the U.S. According to research by Politifact, there were about 1.4 million firearm deaths in that period; compared with 1.2 million U.S. deaths in every conflict from the Revolutionary War to Iraq.

Compared to other economically developed nations like Canada, the U.S. has by far the most gun related deaths and injuries. It is important to note that Canada's gun control laws are much tougher than those of the United States.

"The Brady Campaign To Prevent Gun Violence" offers excellent ways for us to help reduce gun deaths and injuries -- like signing their petition urging federal background checks on all gun sales, including those sold at gun shows and through private sales.

Gun violence, and every other form of violence, is not the way of the Gospel. No exceptions.

[Tony Magliano is an internationally syndicated social justice and peace columnist. He is available to speak at diocesan or parish gatherings about Catholic social teaching. His keynote address, "Advancing the Kingdom of God in the 21st Century," has been well received by diocesan and parish gatherings from Santa Clara, Calif. to Baltimore, Md. Tony can be reached at tmag@zoominternet.net.]