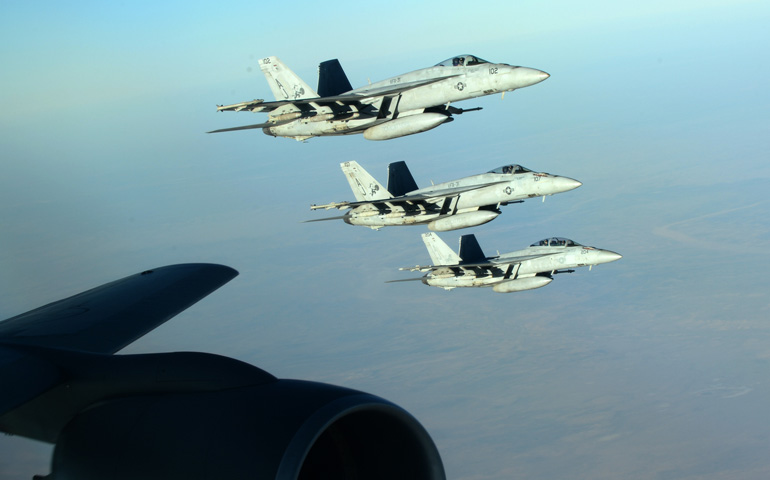 U.S. Navy fighter planes make a formation Sept. 23 over northern Iraq. These aircraft were part of a large coalition strike package that was the first to strike Islamic State targets in Syria. (CNS/EPA/Department of Defense handout)

We need to do something.

With the barbaric Islamic State militant group now controlling large portions of Iraq and Syria and inflicting rape, torture, and even beheading on those who do not conform to their fundamentalist interpretation of Islam, it is imperative that they must be stopped.

Shortly after the start of the first Gulf War in 1991, St. John Paul II wrote: "No, never again war, which destroys the lives of innocent people, teaches how to kill, throws into upheaval even the lives of those who do the killing and leaves behind a trail of resentment and hatred, thus making it all the more difficult to find a just solution of the very problems which provoked the war."

There is a collective amnesia that continues to block government and society's memory that we have been there and done that many times before. Therefore, the war machine keeps rolling on with the encouragement of hawkish politicians, pundits and the military industrial complex.

While attacking Afghanistan resulted in the overall removal of al-Qaida, members of the group just simply moved to Yemen and Somalia. Military action against al-Qaida did not defeat the group. And if it ever does, other militant groups will rise to take its place.

Instead of military action, we need to address the root causes of war: mainly, injustice. For as Pope Paul VI famously said, "If you want peace, work for justice."

The American-led coalition in Iraq destroyed much of that country, killed countless innocent civilians and greatly encouraged many of those affected to join Islamic militant groups like the Islamic State.

During a "Democracy Now" interview with Rami Khouri, director of the Issam Fares Institute for Public Policy and International Affairs at the American University of Beirut, Khouri said the major problems that lead to the formation and growth of militant Islamic groups like the Islamic State are a foreign military presence like the U.S. in Muslim-majority countries and brutal dictators -- often backed by the United States -- who rule much of the Arab-Islamic world.

Khouri said American-led military action in the Islamic world is the best recruiting tool for al-Qaida and the Islamic State. And it stands to reason. Imagine how most people would react -- including many Christians -- to a foreign power bombing and killing their children, wives, mothers, fathers, brothers and sisters.

Furthermore, the Islamic State is largely made up of Sunni Muslims, many of whom have been oppressed by the American-backed, Shiite-dominated Iraqi government.

Thus, the Islamic State has found a certain degree of support in Sunni villages and cities. And since these fighters blend into the general Sunni population, bombing them there is causing the civilian death toll to mount. Therefore, the just war theory principle of discrimination is not being met, and the killing of innocent civilians continues to bring new recruits to the Islamic State, encouraging the violent cycle to continue.

So what would be a Gospel-based way of responding to this violent crisis?

The Gospel calls us to mount an active response to suffering based on loving nonviolence.

This means no bombs, no drones, no missiles. The U.S. and other arms-supplying nations need to stop flooding the Middle East (and the world) with weapons. A total multilateral arms embargo is needed.

Greater pressure needs to be put on countries like Saudi Arabia and Kuwait to enforce a complete ban on the funding of the Islamic State from some of its wealthy citizens.

And the diplomatic tool must be vigorously pursued.

The United States and other wealthy nations need to provide adequate resources for the quick evacuation of Christians and other minorities who are in harm's way.

And funds and supplies need to be massively increased to assist nations -- like Lebanon, Jordan and Turkey -- that are being overwhelmed by Iraqi and Syrian refugees.

Finally, the United States and other industrial nations need to do their fair share in offering emergency asylum to these poor, frightened refugees.

Please email and call your congressional delegation (Capitol switchboard: 202-224-3121) and President Barack Obama (202-456-1111) to urge them to stop the bombing and start the nonviolent actions mentioned above.

It would do us all well to seriously reflect on the words of Pope Francis: "War is never a necessity, nor is it inevitable. Another way can always be found: the way of dialogue, encounter and the sincere search for truth."