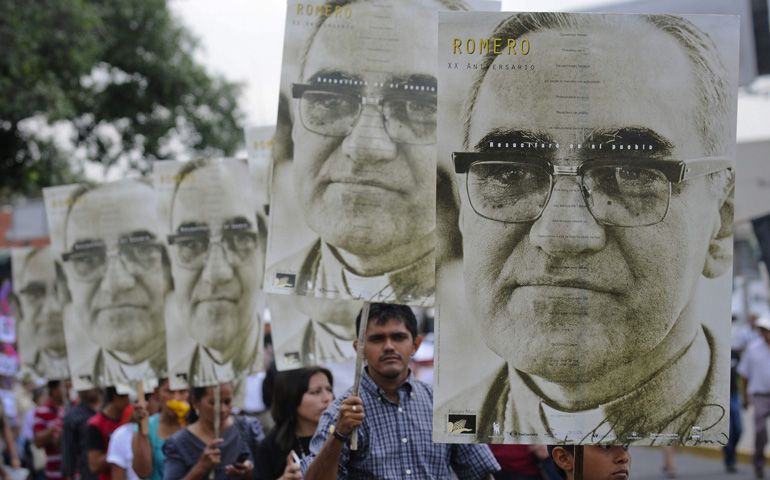 Who would have predicted it?

Who would have imagined on Feb. 3, 1977, the day of his appointment as archbishop of San Salvador, that the highly conservative Oscar Romero -- who was suspicious of the Catholic church's involvement in political activism -- would die a martyr's death for courageously defending his people against the murderous assaults of the Salvadoran government and military and their allied right-wing death squads?

Romero's appointment was welcomed by the government, but many priests were not happy. They suspected their new archbishop would insist they cut all ties to liberation theology's defense of the poor.

One of the priests who worked with Romero, Fr. Inocencio Alas, recalled key moments leading to the archbishop's dramatic conversion.

According to Alas, the archbishop began to realize that the poor laborers waiting for work at the coffee plantations were sleeping on the sidewalks.

"What can be done?" Romero asked. Alas replied, "Look at that big house where the school used to be. Open it up!" And Romero did.

Next, he started talking with those poor workers and began to understand their problems.

But Romero had difficulty believing Alas' claim that plantation owners treated workers unjustly. Alas said, "Why don't you go to the plantation of this friend of yours? Go find out for yourself."

After visiting the plantation, Romero said to Alas, "You were right, Father, but how is so much injustice possible?" Alas replied, "This world so full of injustices is exactly what [the Latin American bishops] were talking about in Medellin [Colombia]."

But the most important event affecting Romero's decision to wholeheartedly stand with the poor and oppressed was the assassination of his close friend Jesuit Fr. Rutilio Grande, who was promoting land reform and worker unions and organizing communities to have a greater voice regarding their own lives.

"When I looked at Rutilio lying there dead, I thought, 'If they have killed him for doing what he did, then I too have to walk the same path,' " said Romero, who was deeply inspired by Grande.

A shameful chapter in American history reveals the U.S. government supplied the brutal Salvadoran military with millions, and later, billions of dollars in weapons and training.

In a letter to U.S. President Jimmy Carter, Romero warned continued U.S. aid to the government of El Salvador "will surely increase injustice here and sharpen the repression that has been unleashed against the people's organizations fighting to defend their most fundamental human rights." Romero asked Carter to stop all military assistance to the Salvadoran government.

During his March 23, 1980, Sunday national radio homily, Romero said: "I would like to make an appeal in a special way to the men of the army ... You kill your own campesino brothers and sisters. ... The law of God must prevail that says: Thou shalt not kill! No soldier is obliged to obey an order against the law of God. ... In the name of God, and in the name of this suffering people whose laments rise to heaven each day more tumultuously, I beg you, I ask you, I order you in the name of God: Stop the repression!"

The next day, while celebrating Mass in the chapel of the hospital compound where he lived, Romero's loving heart was pierced with an assassin's bullet.

On May 23, the holy archbishop of San Salvador will henceforth be known as Blessed Oscar Romero. But for the people of Central America, especially the poor and oppressed, he is already known as St. Oscar Romero.

[Tony Magliano is an internationally syndicated social justice and peace columnist. He is available to speak at diocesan or parish gatherings about Catholic social teaching. His keynote address, "Advancing the Kingdom of God in the 21st Century," has been well received by diocesan gatherings from San Clemente, Calif., to Baltimore. Tony can be reached at tmag@zoominternet.net.]