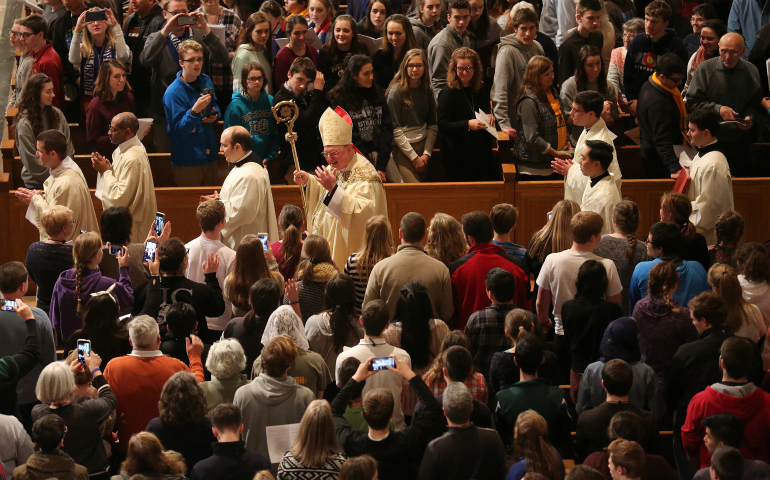 New York Cardinal Timothy M. Dolan, chairman of the U.S. bishops' Committee on Pro-Life Activities, waves as he arrives to concelebrate the opening Mass of the National Prayer Vigil for Life at the Basilica of the National Shrine of the Immaculate Conception in Washington Jan. 26. (CNS photo/Bob Roller)

Over 25 times from the top of Capitol Hill in Washington, D.C., I have seen a sea of people marching to proclaim the dignity of unborn human life and to proclaim how death-dealing abortion sends the unholy message that some human beings are disposable.

As I write, I am just one day away from marching with and viewing that sea of people once again. It's always a moral and spiritual shot-in-the-arm for me.

But good as they are, the Washington "March for Life" (Jan. 27), the "Walk for Life West Coast" (Jan. 21), the "Midwest March for Life" (Feb. 4) and dozens of similar events at state capitols throughout the U.S. are simply not enough.

While significant progress has been made to lessen the number of abortions, nonetheless, according to the National Right to Life Committee over 1 million unborn brothers and sisters are killed by abortion each year.

And according to the World Health Organization, over 55 million unborn babies worldwide are aborted every year.

Throughout the entire year believers in the God of life need to pray, educate, peacefully protest at abortion facilities, donate and lobby on behalf of the unborn — the unborn can't do it for themselves.

Signing-up to receive legislative alerts from your state Catholic conference will greatly help. This will easily allow you to promote legislation protecting the lives and dignity of unborn and born human beings alike.

Additionally, you can email and call your congressperson (Capitol switchboard: 202-224-3121) urging her/him to fully support "The Heartbeat Protection Act" (H.R. 490). And urge your two U.S. senators to sponsor and support a companion bill in the Senate. If passed into law, this bill would prohibit abortions on unborn babies whose heartbeat is detectable.

And urge your senators to vote for the recently passed House bill "No Taxpayer Funding for Abortion and Abortion Insurance Full Disclosure Act" (H.R. 7), which would ban taxpayer funded abortions.

The execution of over 300,000 abortions every year makes Planned Parenthood the largest abortion provider in the U.S.

How can any person who truly respects life support abortion — the dismembering of tiny innocent unborn babies. There simply is no morally acceptable reason to perform an abortion.

The developing human being in utero is nothing short of miraculous!

Watch this fascinating video produced by Alexander Tsiaras, mathematician and former chief of scientific visualization at Yale University's Department of Medicine. And after watching it ask yourself, "How is it possible that anyone could destroy such a marvelous work of God?"

A civilized nation does not kill babies waiting to be born. And if we dare carry this life-affirming perspective to its logical moral conclusion, we must also declare that a civilized society does not kill anyone, for any reason, period.

That was the life-affirming perspective of the early church. In their theology no blood could be spilled — no abortion, no capital punishment, no war.

It was a Gospel-centered theology based on the unconditional love of God towards every person, as best exemplified by Jesus.

We would do well to walk in the footsteps of the non-violent master and his early followers, proclaiming in word and deed that no life is disposable, and that every person is a beloved child of the God of life!