The hidden poor of Appalachia 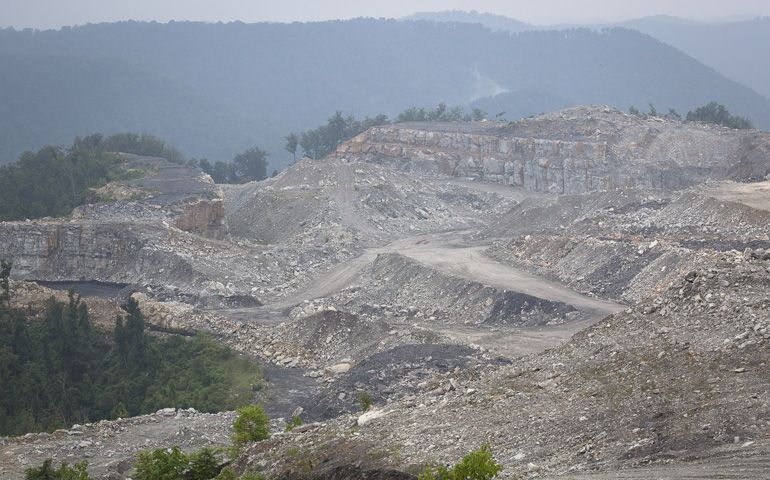 A mountaintop removal coal mine on Kayford Mountain south of Charleston, W.Va., in August 2014 (CNS/Tyler Orsburn)

Back in the mid-1980s, I was working as a director of religious education at St. Peter's Catholic Church in western Maryland.

That part of Maryland, like all of West Virginia and parts of 12 other U.S. eastern states, from Alabama to New York, is part of the Appalachian Mountain region.

In those days, as I got to know the beauty of Appalachia and some of the simple, friendly and caring mountain folks, I discovered the grinding poverty many of them were experiencing.

Largely out of sight in the mountains and hollows were people living in shacks with no indoor plumbing. They would haul water from the nearest spring.

Since there were very few jobs and inadequate public services, most of them were stuck in their poverty.

I remember Judy, who helped with our special-education Bible class. The winter before we met, she and her family lived in a tent in the mountain woods. It's a miracle they survived.

I remember Dagwood, an older man who cared for his two little granddaughters in a small, run-down shack with a floor made of dirt and rotten wood.

I remember a lady who was 80 years old. Habitat for Humanity volunteers built her an indoor toilet. Up to that point, she was using an outhouse.

I remember the family that didn't even have an outhouse. Before Habitat built them one, they were using the woods.

And I remember the coal companies. Their deep mining and mountaintop removal mining raped the land and polluted the air, rivers and streams. Their blasting regularly damaged the houses of many already poor Appalachian residents. And sadly, these abuses continue to this day.

You can help correct some of this injustice. Please urge your U.S. representative to co-sponsor the Appalachian Emergency Community Health Act (H.R. 912), which is designed to determine the health hazards of mountaintop removal coal mining and hopefully will lead to its end. And urge your two U.S. senators to introduce a companion bill in the Senate.

Forty years ago, the Catholic bishops of the Appalachian region wrote a document that reflects the courage of a prophet, the intellect of a sage, and the beauty of a poet. It deserves to be considered among the great works of American literature.

"This Land is Home to Me" is a pastoral letter that reflects the beauty of the Appalachian Mountains, as well as the powerlessness of many of its inhabitants.

Appalachia makes us think of people who live in the hills, who love nature's freedom and beauty, who are alive with song and poetry. But many of these people are also poor and suffer oppression. ...

The bishops wrote that the destructive growth patterns of corporate giants like the coal companies often pollute the air, foul the water and rape the land.

They declared, "The driving force behind this perversion is 'Maximization of Profit', a principle which too often converts itself into an idolatrous power. ... It delivers up control to a tiny minority whose values then shape our social structures. ... It has become clear to us that the present economic order does not care for its people. In fact, profit and people frequently are contradictory. Profit over people is an idol. ... This is not a problem only for mountain folk; it is everybody's problem."

I have only scratched the surface of this beautifully powerful document. Do yourself, Appalachia, and the world a favor by reading "This Land is Home to Me." It will challenge you to make a difference.

I leave you with its inspiring closing words: "The dream of the mountains' struggle, the dream of simplicity and of justice, like so many other repressed visions is, we believe, the voice of Yahweh among us.

"In taking them up, hopefully the Church might once again be known as

[Tony Magliano is an internationally syndicated social justice and peace columnist. He is available to speak at diocesan or parish gatherings about Catholic social teaching. His keynote address, "Advancing the Kingdom of God in the 21st Century," has been well received by diocesan gatherings from San Clemente, Calif., to Baltimore. Tony can be reached at tmag@zoominternet.net.]

The hidden poor of Appalachia

Couple tends to a community that flourishes in solitude

People's Pastoral from Appalachia is subject of new documentary