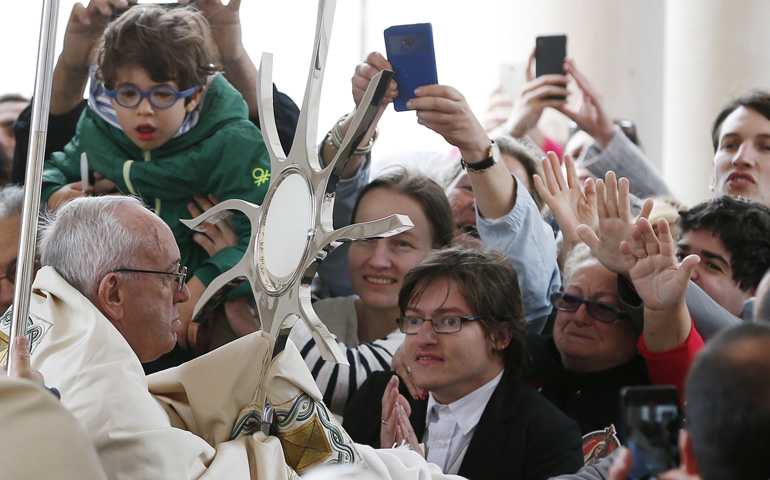 Pope Francis blesses the sick with the Eucharist at the canonization Mass of Fatima seers Sts. Francisco and Jacinta Marto, at the Shrine of Our Lady of Fatima, May 13 in Portugal. (CNS/Paul Haring)

Jesus said to his first disciples, and to all future disciples, "Peace I leave with you; my peace I give to you. Not as the world gives do I give it to you."

But political leaders, governments, corporations and countless people seek the false and fleeting peace of the world which seduces the senses, minds and even souls into believing that having more stuff — including more weapons of war, more money for war, more training for war — will bring peace. To the contrary, this self-centered, materialistic, militaristic mentality and lifestyle only leads to personal emptiness, tense truces, war and more war.

True and lasting peace, the peace our hearts are hungry for, the peace our world longs for, comes only from God. It is the "Shalom" — the right relationship, serenity and harmony with the Creator, with ourselves, with each other and with all creation, best exemplified by the Father's incarnate Son — which Jesus himself offers to us.

But the reception of God's peace — the very indwelling of the Holy Spirit — requires the humility, trust and openness of a soul ready to attentively listen to God's word and faithfully follow in his footsteps.

"I have set before you life and death, the blessing and the curse. Choose life, then, that you and your descendants may live, by loving the Lord, your God, obeying his voice, and holding fast to him" (Deuteronomy 30:19-20).

As is so much the case today, 100 years ago so much of humanity was bent on choosing death and the curse. Europe and beyond was embroiled in World War I which claimed approximately 17 million lives and caused untold destruction.

The era surrounding 1917 was one of extreme persecution for the church. From Mexico to France, from Portugal to Russia, the followers of Christ were under fierce attack.

In Portugal, the newly installed atheistic republic pillaged Catholic churches and convents. Legislation was passed suppressing religious orders, religious feasts and the teaching of religion in schools. Most bishops were exiled and many priests were imprisoned.

But in the midst of human sin and pain, the God of life always chooses to suffer with his people. He always gives us the strength and courage to persevere in faith. And when necessary, he sends his mother.

One hundred years ago, on May 13, 1917, near the town of Fatima in Portugal, the Blessed Mother appeared to three children saying, "Please don't be afraid of me. … I come from heaven." With a rosary in her hand, she requested that they pray and devote themselves to the Holy Trinity. And she asked them to “say the rosary every day, to bring peace to the world and an end to the war.”

The rosary is a beautiful and powerful heavenly gift. The Marian intercessory prayers are comforting. The mysteries centering on the life, death, resurrection and ascension of our Lord are awesome to meditate upon, and can lead the soul into a sublime contemplative experience of our peaceful God.

In praying the rosary and other prayers for peace we become more peaceful persons who are more willing to spread the peace of God — the peace the world cannot give.

Editor's note: Tony Magliano will be speaking at Old St. Patrick’s Church in Chicago on Wednesday, July 19 from 6:30-8 p.m. The theme of Tony’s talk is "Advancing the Kingdom of God in the 21st Century."