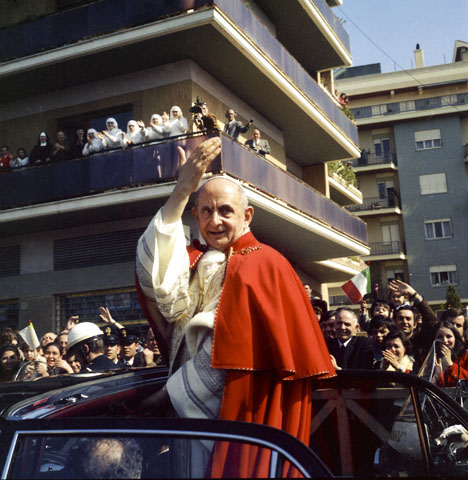 Pope Paul VI greets the crowd April 2, 1972, as he visits the parish of Jesus the Divine Master in Rome. (CNS/Catholic Press Photo/Giancarlo Giuliani)

With numerous armed conflicts raging in various parts of the world and the Vietnam War worsening, Pope Paul VI on Oct. 4, 1965, proclaimed before the U.N. General Assembly: "No more war, war never again. It is peace, peace which must guide the destinies of peoples and of all mankind."

Unfortunately, in 1965, the world did not heed Blessed Paul VI's prophetic words. And sadly, it has not heeded them since.

From Mexico to South Sudan, from Syria to Ukraine, from Russian and U.S. nuclear weapons threatening each other to the endless "war on terrorism," today more than ever the world needs to heed Blessed Paul's plea: "No more war, war never again. It is peace, peace which must guide the destinies of peoples and of all mankind."

Since Pope Paul had tremendous respect for all human life starting at conception, it is providential that the miracle granted by God through his prayerful intercession involved the healing of an unborn child.

According to Vatican Insider, in California in 2001, an unborn child was diagnosed with ascites (liquid in the abdomen) and anhydramnios (absence of fluid in the amniotic sac). When every corrective attempt failed, the doctors said the baby would die before birth or be born with dangerous renal impairment.

When abortion was offered as an option, the mother refused. Instead, she prayed for a miracle, asking Pope Paul's intercession to God. Ten weeks later, test results revealed that the unborn child had significantly improved, and he was born by cesarean section.

The boy is now a healthy adolescent considered completely healed. The Vatican's medical consultation team headed by Patrizio Polisca confirmed that it was impossible to explain the healing scientifically.

Over 40 years ago, Blessed Paul VI foresaw the impending environmental disaster facing humanity today. In his apostolic letter Octogesima Adveniens ("A Call to Action"), he warned: "Man is suddenly becoming aware that by an ill-considered exploitation of nature he risks destroying it and becoming in his turn the victim of this degradation."

In his day -- and even more so today, in a world where great economic inequality exists, where the rich keep getting richer and the poor keep getting poorer -- Blessed Paul VI in his prophetic encyclical Populorum Progressio ("On the Development of Peoples") clearly challenged this grave injustice.

He wrote, "God intended the earth and everything in it for the use of all human beings and peoples. Thus, under the leadership of justice and in the company of charity, created goods should flow fairly to all. ...

Instead of largely ignoring the reasonable and just demands of countless oppressed people and then going to war against them when they rise up, we should tirelessly work for social justice for all people.

For as Blessed Paul VI continued to teach in his encyclical Populorum Progressio, "When we fight poverty and oppose the unfair conditions of the present, we are not just promoting human well-being; we are also furthering man's spiritual and moral development, and hence we are benefiting the whole human race. For peace is not simply the absence of warfare, based on a precarious balance of power; it is fashioned by efforts directed day after day toward the establishment of the ordered universe willed by God, with a more perfect form of justice among men."