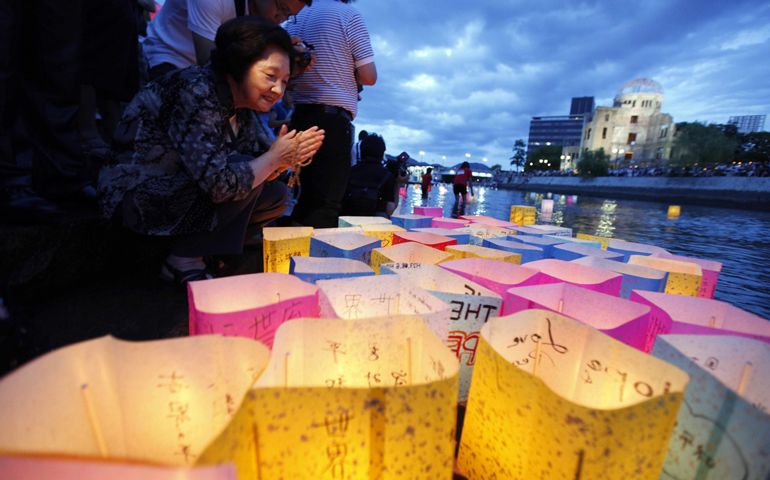 A woman prays after releasing a paper lantern on a river facing the gutted Atomic Bomb Dome in Hiroshima, Japan, on Aug. 6, 2011, the 66th anniversary of the world's first atomic bombing. (CNS/Reuters/Kim Kyung-Hoon)

You are within 30 minutes of being incinerated from nuclear weapons.

If you live in or near a large U.S. city or major military installation, you are in harm's way. And when considering that radiation fallout from a nuclear attack would hurt virtually everyone, nuclear weapons threaten us all.

Dr. Bruce Blair, a former officer responsible for Minuteman nuclear missiles in Montana and now a co-founder of Global Zero, an international organization dedicated to eliminating all nuclear weapons, shared with me a highly dangerous, little-known fact: Both the United States and Russia each have approximately 1,000 nuclear warheads still aimed at each other. Even worse: These weapons of mass destruction are programmed at launch-ready alert, otherwise known as hair-trigger alert.

Because Russian and American land-based nuclear missiles can reach their targets in just 30 minutes, Blair said, "The president, after a very short briefing, would have just 12 minutes max -- and, more plausibly, only five minutes -- to decide whether to launch a nuclear attack against Russia. And if a reported Russian attack is launched from sea, the president would only have seconds to make a decision."

Blair said Russia has a very similar system, except much of theirs is antiquated, increasing the chance of a nuclear exchange based on misinformation or technical malfunction.

In fact, because of sloppy communications and/or computer errors, Russia and the United States have come within minutes of nuclear war more than once.

This very dangerous game of nuclear American-Russian roulette should deeply concern each one of us.

And when we factor in that seven other nations possess nuclear weapons, the chance of nuclear war increases significantly, especially when we consider the very unstable regimens of Pakistan and North Korea.

Then, on Aug. 9, 1945, the U.S. dropped a second atomic bomb, this time on the Japanese city of Nagasaki, killing at least 60,000 people -- again, mostly civilians. At the time, Nagasaki was the center of Japanese Catholicism.

The tremendous death and destruction these two nuclear weapons caused is small in comparison to the carnage that would result today from the detonation of two far more powerful modern nuclear weapons.

And since a limited nuclear exchange would likely escalate into an all-out nuclear war, the death and destruction that would result is unimaginable.

Global Zero has developed a plan to completely eliminate the world's approximately 16,000 nuclear weapons by 2030. Learn how you can help.

Also, Russia and the United States need to take the missiles aimed at each other off hair-trigger alert by physically removing the warheads from each missile, Blair said.

Please contact President Barack Obama and urge him to convene an international nuclear weapons elimination conference and to enter into negotiations with Russia to take the missiles aimed at each other off hair-trigger alert. Ask your parish, school, and friends to do this, too.

Recently canonized St. John XXIII would like to weigh in here. In his prophetic encyclical Pacem in Terris ("Peace on Earth"), he wrote, "Hence justice, right reason, and the recognition of man's dignity cry out insistently for a cessation to the arms race. The stock-piles of armaments which have been built up in various countries must be reduced all round and simultaneously by the parties concerned. Nuclear weapons must be banned."