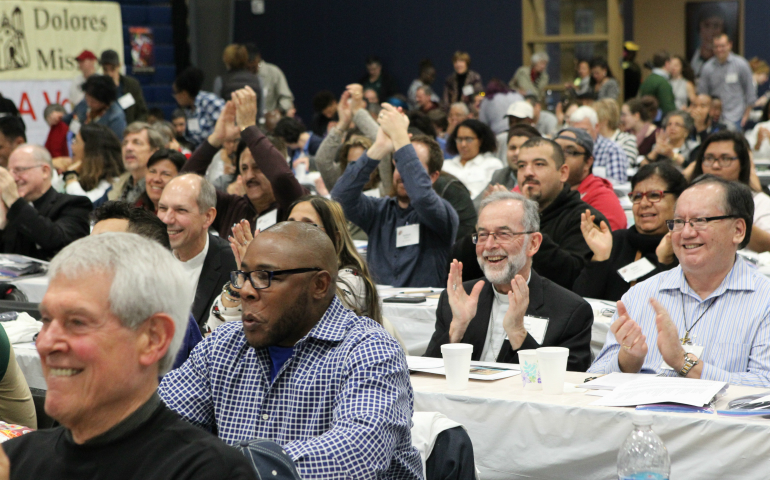 Attendees cheer a statement about justice for immigrants Feb. 16 during a the opening program of the U.S. regional World Meeting of Popular Movements in Modesto, Calif. (CNS photo/Dennis Sadowski)

You may not have heard about it, but it was a big deal — big enough to inspire Pope Francis to get involved.

The big deal was the U.S. Regional World Meeting of Popular Movements (WMPM) that recently gathered (Feb. 16-19) in Modesto, Calif.

Drawing together hundreds of faith-based and social justice organizers from across the United States and the world, the WMPM focused on the themes of "land, labor and lodging," along with immigration and racial issues.

Sponsored in part by the Vatican's department of Integral Human Development and U.S. Conference of Catholic Bishops, the WMPM in California was the first such regional gathering to follow three previous international meetings.

In 2014 Pope Francis convened the first-ever World Meeting of Popular Movements at the Vatican to address the basic need of everyone for adequate land, housing and work.

In a letter read to participants at the recent U.S. Regional WMPM in California, Pope Francis said, "It makes me very happy to see you working together towards social justice! How I wish that such constructive energy would spread to all dioceses, because it builds bridges between peoples and individuals. These are bridges that can overcome the walls of exclusion, indifference, racism and intolerance."

In Francis' call to dioceses to build bridges that overcome societal and economic injustices, it's important to note that those bridges need to be built on the solid foundation of Catholic social teaching — unfortunately our "best kept secret."

Sadly, many Catholics — clergy and laity alike — view Catholic social teaching as a minor sub-topic of Catholicism. On the contrary, the social doctrine of the Catholic church is nonnegotiable. It is an extremely important, absolute central part of Catholic teaching (see the Catholic Social Teaching site).

Therefore it is essential for every diocese and parish to finally make a firm commitment to learn about, pray over, and live out Catholic social teaching.

Then the essential bridges between peoples and individuals Pope Francis is calling us to construct will be built on solid rock like that of the wise man in the Gospel whom Jesus praises for building his house on firm ground, so that when the storms came, the house stood strong.

And make no mistake about it, when we courageously stand with the poor and vulnerable, the evil one together with the violent forces of "the world" will mount a powerful storm against us. But if we are anchored firmly in the Gospel, and Gospel-based Catholic social teaching, we too will stand strong within the invincible armor of God!

Continuing his remarks to the U.S. Regional WMPM the Holy Father said, "I am speaking of a system that causes enormous suffering to the human family, simultaneously assaulting people's dignity and our common home in order to sustain the invisible tyranny of money that only guarantees the privileges of a few."

No mere window dressing will fix this immoral mess. The entire money-hungry, greed-driven system needs to be dismantled and replaced with an economic system that places human beings — every human being — above money and things.

Turning to the environment, Pope Francis warns that "The ecological crisis is real. A very solid scientific consensus indicates that we are presently witnessing a disturbing warming of the climatic system. … Let us not fall into denial. …

"There are fundamentalist and violent individuals in all peoples and religions — and with intolerant generalizations they become stronger because they feed on hate and xenophobia.

"By confronting terror with love, we work for peace."

[Tony Magliano is an internationally syndicated social justice and peace columnist. He will be speaking March 6 at 6:30 p.m. in the parish hall of St. Frances Cabrini Parish in Tucson. He will give the address "Advancing the Kingdom of God in the 21st Century."]