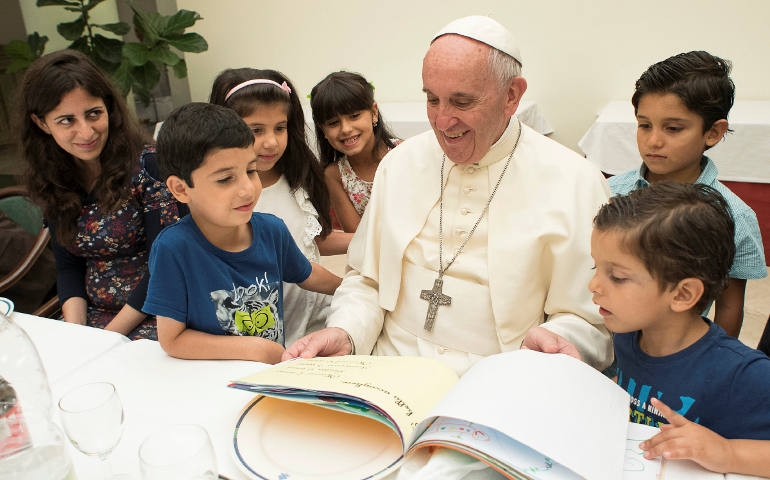 Imagine, right now at this very moment you and your loved ones need to run for your lives!

With hardly more than the clothes on your backs, you and your family must flee from an invading armed force.

Or imagine your quick exodus is due to the fact that gang members have threatened to kill your family because your teenage son or grandson has refused to join their murderous drug gang.

Or imagine that because of your religion, race, nationality, political belief or membership in a particular social group you and your family are being persecuted.

So, you decide that despite the very dangerous risks involved, the only reasonable hope you and your family have is to move as quickly as possible towards somewhere, anywhere, where life is safer than where you're at now.

That's exactly what more than 65 million desperate people have done.

According to the United Nations High Commissioner for Refugees' (UNHCR) recent Global Trends 2015 report, 65.3 million people were displaced by the end of 2015 -- greater than the combined population of Canada, New Zealand and Australia. On average 34,000 people per day were forced to flee from their homes in 2015, that's four times more than a decade earlier. And there appears to be no end in sight to this nightmare.

Last year well over 3 million fellow human beings sought emergency asylum in foreign countries, while more than 40 million people were displaced within their own country -- the highest number of asylum seekers and internally displaced people in history, according to the United Nations High Commissioner for Refugees (You can view the Global Trends 2015 video here.)

The United Nations High Commissioner for Refugees says the reasons for the increasingly huge numbers of displaced persons, is partly due to long-term ongoing conflicts like Somalia and Afghanistan. Also, new and reignited armed conflicts are occurring more often. With Syria being the largest and worst example, recent wars in Yemen, Burundi, Ukraine, Central African Republic and South Sudan have forced millions to flee.

A religious sister and friend of mine, who ministered in South Sudan for several years, told me the situation there is tragic and getting worse. The world's newest nation is greatly suffering from the ancient plagues of war and poverty.

Followers of Jesus cannot ignore all this suffering. We must not allow ourselves to be part of what Pope Francis calls a "globalization of indifference."

In similar sentiments, United Nations Secretary-General Ban Ki Moon said, "We are facing the biggest refugee and displacement crisis of our time. Above all, this is not just a crisis of numbers; it is also a crisis of solidarity."

For Catholics there should never be a crisis of solidarity. For solidarity is one of the essential principles of Catholic social teaching.

The opening words of Gaudium et Spes, Vatican II's constitution on the church in the modern world, beautifully reveal what being in solidarity with the poor and vulnerable means for the Christian: "The joys and the hopes, the griefs and the anxieties of the men of this age, especially those who are poor or in any way afflicted, these are the joys and hopes, the griefs and anxieties of the followers of Christ."

As an act of solidarity, please email and call your two U.S. senators and congressperson (Capitol switchboard: 202-224-3121) urging them to robustly increase emergency and fiscal year 2017 funding for refugees and displaced persons throughout the world. Also urge them to significantly increase the number of well-vetted refugees into the U.S. And insist that they stop funding extremely harmful military actions in numerous conflict zones.

Let us take to heart the words of St. John Paul II, "We are all really responsible for all."

[Tony Magliano, an internationally syndicated columnist on peace and justice issues, is available to speak at diocesan or parish gatherings about Catholic social teaching. He has delivered a keynote address, "Advancing the Kingdom of God in the 21st Century," at gatherings from Santa Clara, Calif., to Baltimore, Md., Magliano can be reached at tmag@zoominternet.net.]

Editor’s Note: On Aug. 2, NCR published, " 'People's platform' right for what's wrong, wrong for doing it right," a short essay by Tom McDonough in response to Tony Magliano’s July 18 column "A political platform for all people." Below is Magliano's reply to McDonough's criticism:

Mr. McDonough is correct in emphasizing that "A great weight must be put on the individual responsibility of every Catholic, particularly laity engaged in human affairs, to be Jesus Christ and thus to bring Jesus Christ into her or his environment: into work, into family, into society." Yes, in the Gospel Christ clearly teaches that individuals must generously and justly reach out to the poor. But the Holy Spirit speaking through Catholic social teaching also insists that rich nations have a very heavy obligation to generously and justly aid the poor. Blessed Paul VI’s encyclical letter Populorum Progressio (“The Development of Peoples”) clearly make this point (Nos. 44, 48).

The Christian anti-poverty advocacy organization “Bread for the World” also makes the case that while individual donations are very important, Congress and/or the president can more than undo our collective individual gifts to the domestic and global poor. For example, the last Farm Bill passed by Congress and signed by President Obama in 2014 cut over $8 billion from SNAP – formerly known as the food stamp program – cutting on average $90 a month in food benefits to hundreds of thousands of poor Americans.(See: Congress passes $8.7 billion food stamp cut.)

As individuals, and as a rich nation, the poor of the U.S. and of the world need our generous and just response to their many grave needs. The Gospel and Catholic social teaching call for no less.