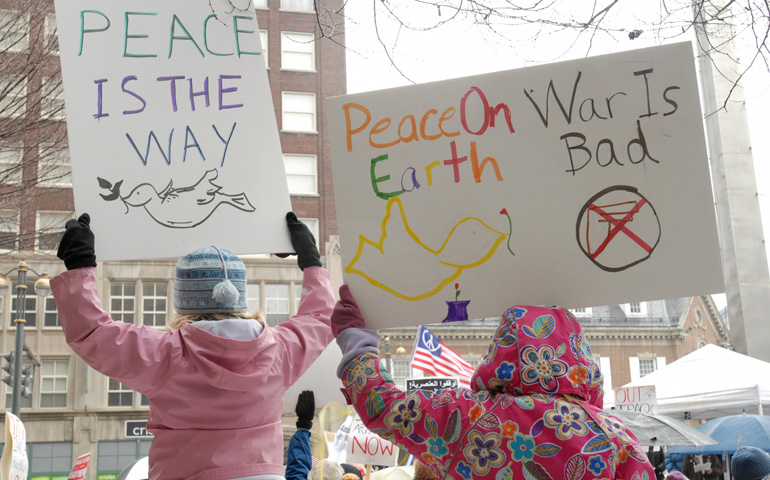 Children take part in a protest marking the fifth anniversary of the war in Iraq in March 2008 at the Liberty Pole in Rochester, N.Y. (CNS/Catholic Courier/Mike Crupi)

During the recent U.S. Catholic bishops' fall assembly in Baltimore, two bishops decided to forego the dinner sponsored by the U.S. Army Chaplains Corps and attended instead a simple supper and discussion on peacemaking.

On the evening of Nov. 11, at historic St. Vincent de Paul Catholic Church in Baltimore, Archbishop Joseph Tobin of Indianapolis and Bishop John Michael Botean, head of the Romanian Catholic Eparchy of St. George's in Canton, Ohio, broke bread with about 20 Catholic peace activists, including me, and dialogued with us about how the Catholic church could shift from a "just war" to a "just peace" doctrine and spirituality.

Eli McCarthy, director of justice and peace for the Conference of Major Superiors of Men, started the dialogue off with a presentation on the theological developments of the concept of "just peace."

He explained that by supporting cooperative conflict resolution, fostering just and sustainable economic development, advancing human rights and interdependence, significantly reducing weapons and the arms trade, providing education in nonviolent peacemaking and resistance, and creating nonviolent civilian-based defense we can help advance a peace founded on social justice and nonviolence.

"War continues to create habits of war," he said. As we quickly move from one armed conflict to the next, this observation is beyond dispute.

"War dehumanizes us," Tobin said, adding that during World War II, U.S. Gen. Curtis LeMay, who planned and executed a massive bombing campaign against cities in Japan, seemed to have little regard for the lives of Japanese children, women and men.

"Killing Japanese didn't bother me very much at that time. ... I suppose if I had lost the war, I would have been tried as a war criminal," LeMay said.

Yes, the Japanese were U.S. enemies, but didn't Jesus command us to love our enemies? It's hard to make a case that we love our enemies when we're dropping bombs on them and on their children, wives, mothers and fathers.

War often numbs our conscience. To illustrate that dangerous fact, LeMay said: "Every soldier thinks something of the moral aspects of what he is doing. But all war is immoral and if you let that bother you, you're not a good soldier."

Botean said during the Chinese invasion of Tibet, no one would have expected the Dalai Lama to tell his followers to take up arms to fight the Chinese, and no one would have expected him to espouse violence. In contrast, the general population does not expect Catholics to refuse the taking up of arms. In light of the nonviolent Jesus, there's something wrong with this picture, he said.

Botean also mentioned that he personally has given every U.S. Catholic bishop a copy of Fr. Emmanuel Charles McCarthy's prophetic book Christian Just War Theory: The Logic of Deceit. It's definitely worth reading.

McCarthy reminds us that Jesus is the pre-eminent model of "just peace" in his caring for the outcasts, loving and forgiving enemies, challenging the religious, political, economic and military powers, and in risking and offering his life on the cross to expose and transcend both injustice and violence.

He adds that Jesus' new commandment, "Love as I have loved you," is a command to nonviolently love neighbors, strangers and even enemies.

A key question to ask ourselves, according to McCarthy: "What kinds of people are we becoming?"

Are we becoming more understanding, forgiving, just, generous, compassionate, gracious, and peaceful? Do we love everyone unconditionally, as God does? Are there sides to us as individuals and as a society that harbor selfishness, greed, anger, vengeance, violence and indifference?

It was encouraging to hear two bishops and 20 laypeople struggling with their consciences to discern how best to challenge the church and themselves to relinquish all ties to war and war preparation.

It would be well for all Christians to undertake a similar discernment and honestly ask ourselves what the nonviolent Jesus is calling us to do.

A version of this story appeared in the Dec 19, 2014-Jan 1, 2015 print issue under the headline: Two bishops dine and dialogue with peace activists.