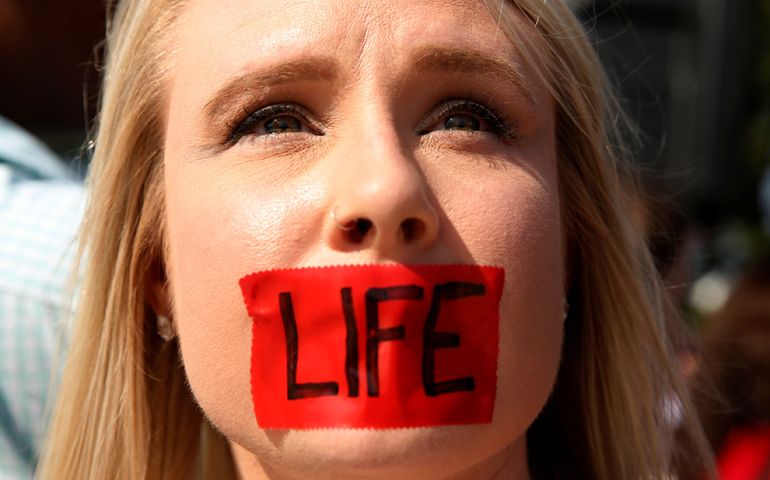 For those of us using the Gospel and Catholic social teaching as our voting guide, choosing between the Democratic and Republican presidential candidates was an absolute dilemma.

Hillary Clinton's hawkish military attitude, like her vote to authorize former President George W. Bush to attack Iraq — which opened up the doors to the ongoing bloodbath in the Middle East — along with her aggressive support for the ongoing bloodbath of abortion, made it morally impossible for me to cast my vote for her.

And Donald Trump's threat to deport millions of hard-working undocumented Latinos, his promise to "build a great, great wall on our southern border" insisting that "Mexico pay for that wall," his temporary ban on Muslims entering the U.S., his threat to deport war-torn Syrian refugees, his plan to give massive tax breaks to the rich, his denial of alarming climate change, his determination to greatly increase spending for weapons of war, and his argument that American allies — including South Korea — should build their own nuclear weapons, made it morally impossible for me to cast my vote for him.

But I did vote.

I casted my write in ballot for the American Solidarity Party's presidential candidate Michael Maturen. And I did so because this party's platform reflects Catholic social teaching far better than any other U.S. political party (see www.solidarity-party.org).

But voting was the easy part.

Deeply committed Christians, who cherish the Gospel's social justice and peace message, clearly understand that we have a serious moral obligation to tirelessly oppose most of President-elect Donald Trump's political agenda — which runs counter to God's command to care for the poor with justice, to nonviolently build peace and to protect our earth home.

And as an ambiguous late-comer to the defense of the unborn, we need to hold President-elect Trump to his promise to appoint pro-life Supreme Court justices.

The expression "comfort the afflicted and afflict the comfortable" is most appropriate here.

As followers of the compassionate Prince of Peace, we are to comfort the suffering, to soothe their afflictions and to uproot the causes of their pain. And to those who are comfortable in being indifferent to the afflictions of the lowly, we are to prophetically afflict their comfortable indifference, to challenge their hard-heartedness and nonviolently fight against their inhumanity — while praying for their conversion.

Responding to Trump's election during a recent speech at Georgetown University, Archbishop Christophe Pierre, the new papal ambassador (nuncio) to the United States, said the church needs "to assume a prophetic role."

Related: In response to Trump, Vatican official says church should be prophetic (Nov. 12, 2016)

Using refugees as an example, he stated, "We have not done much, to be honest with you, on the issue of refugees in the United States. And we could do much more."

To help us do much more, I have listed below several morally strong pro-life, social justice and peace organizations. I find them very helpful. Please sign-up to receive their action alerts.

Why Christian Republicans insist Donald Trump is a good Christian