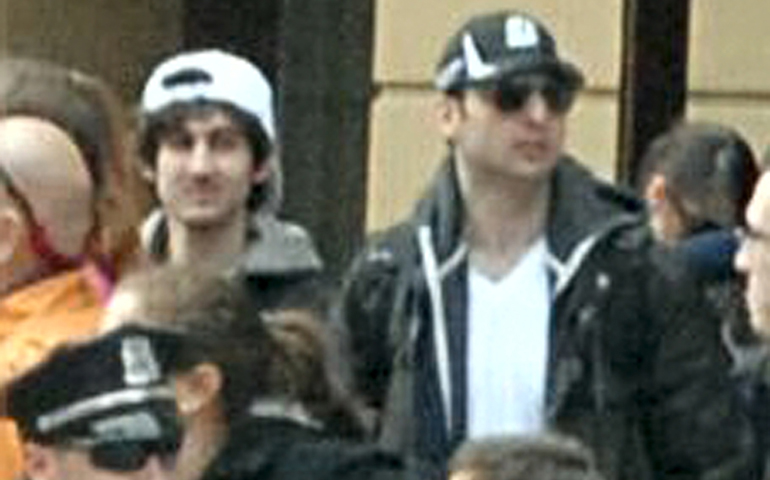 St. Mary's Basilica* in Phoenix anchors one end of a treed plaza. A pastoral center anchors the other. A large, tiled fountain sits in the middle. On the Sunday after the bombings in Boston, my husband and I went to Mass at the cathedral. As we drove up to the plaza, we saw signs announcing a Sikh festival. Long tables were set up at entrance of the plaza. The smell of fried chickpeas and grilled naan filled the air. Children climbed on the fountain and played in the water. Men in turbans and women in gauzy saris waved to us, offering cold water and hot food. We waved back and went inside for the liturgy.

After Mass, we walked by the tables again. On each table there were stacks of letters. A man handed one to all the passersby. We saw a drawing of an American flag and read this introduction, "We are loyal Americans. We join all Americans in condemning the violence in Boston."

I remembered the bombing of the Sikh temple in Detroit. I finished the letter and realized it was a plea not to blame the Sikhs of Phoenix for the bombs in Boston.

The night before, my husband and I sat on the lawn of our hotel some distance from a Zoroastrian wedding, listening and watching as the young man and woman, like so many young men and women in so many times and places, wed. We were headed to our room after a gym workout when the sound of ululating, a cry foreign and beautiful, made us pause.

We watched as attendants threw rose petals on the heads of the parents of the bride and groom. Then the assembly welcomed the bride to the canopy with their urgent ululation, the sound covering her, embracing her, as an attendant wreathed her in clouds of incense. The presider explained he would conduct the rites -- some of them, he said, more than 3,500 years old -- in Farsi. He would translate and explain as necessary.

We watched as four bridesmaids stretched a fringed white cloth over the heads of the bride and groom, making a kind of canopy-within-a-canopy. We watched as they sprinkled sugar over the cloth, the crystals glistening in the late afternoon sun. We listened as the presider asked the bride repeatedly for her consent to marry. Again and again she refused until, at some moment known and understood by the witnesses, she happily consented and the rejoicing began anew.

We were the interlopers, sitting quietly against a hedge, hoping not to be noticed. Perhaps we should have left. Our clothes were sweaty and scant while the guests sparkled in evening dresses and tuxedos. No one seemed to mind. I glanced behind me and saw others watching and listening as well. The rising, wordless cry and a shower of sugar: All of it strange to us, but all of it plainly good and plainly joyful.

My husband's maternal grandfather served in the Kaiser's alpine troops during the First World War. He learned to ski and shoot, though no one remembers him ever demonstrating those skills once he made it to these shores in the early 1920s. By the end of the decade, he had moved with his young family to Amarillo, Texas, where he would run and then own a concrete company. When he arrived, the Klu Klux Klan burned a cross in his front yard. Hans Gulde was a German and a Catholic and he was not welcome in "their" town.

By the time his grandson, later my husband, was president of the high school student body and a delegate to Texas Boys State, the town was his. Ask anybody: The boy was a star, the pride of the Tascosa Rebels, the one "Miss Southern Belle" expected to date and the one "General Reb" cheered on, the kind of students other students meant to honor when they sang the fight song, "Dixie." By some alchemy we know but do not understand, my husband, a German and a Catholic, had become an American.

After Mass, I took the Sunday New York Times and read it out by the hotel pool. I read "Sweden's Closet Racists" by Jonas Hassen Khemiri. He writes of his travails as a native-born Swede who "does not fit the outdated blond, blue-eyed stereotype of what a true Swede should look like."

He invites the reader: "Welcome to my body ... Here are our legs, which always want to run when we see a police car."

I have brown, curly hair and brown eyes. I have an olive complexion and, back before we knew there was such a thing as melanoma, I toasted my summer skin a rich brown. I have walked the streets of Chicago's Pilsen neighborhood and been greeted in colloquial Spanish like a woman from those parts. My ancestors came to this country before the revolution, three of them as indentured servants on the Mayflower. I'm an American, but there's no pattern for how a true American should look.

The next morning, I open Salon, an online magazine, and find an article by Joan Walsh, "Are the Tsarnaev brothers white?" Walsh's Salon column was written, in part, to expand on David Sirota's column in the same journal, a column in which he prayed the bombers would be caught and found to be "white Americans."

They pose these questions as if we are Sweden and have a national "type."

Perhaps we are so aware of skin color because we are so aware of the human tendency to form clubs. Skin color is one way to establish the members from the outsiders. But this club, our country, has one rule: All the members are immigrants or the children of immigrants, coming from lots of different countries, born with lots of different complexions. Once we discovered the ancient land bridge from Asia to North America, we understood that we can only speak of immigrants, some earliest and earlier, some later and latest, but immigrants all.

We fly home and watch as an older man in a suit on his way home from a wedding stands through an airport interrogation and body search. A group of agents inspect his passport. His Indian family stands outside security and watch, distressed. He is the elder of the group and they want to protect his dignity. "We have no recourse; we have no recourse," the man says to my husband, who stands with them.

"I'm sorry," my husband says, "I'm so sorry." A security guard motions us to move farther away, but we can still see the man, standing stiffly, his face tight, as though trying not to show his discomfort and shame.

We know a good deal about the brothers now. We have heard from their high school friends and coaches and from the man who discovered the younger one bleeding in his boat. The omnipresence of these men and their pictures from the streets of Boston -- the white cap turned backward, the black cap pulled low -- bleeds into all the others we meet with hard-to-understand accents and unpronounceable names, people whose roots lie in places we can't find on a map. They come to stand for all of them, the Americans -- Sikhs picnicking in a city park and Persians pledging their love on a hotel lawn. But they don't. They don't.

If someone, of whatever color or whatever dress, plants a suspicious package on a crowded street and walks away, contact the authorities. But if a smiling man in a turban offers you a fragrant wedge of chickpeas and spices, take it and say thanks. If a Persian woman stands before you, sugar-jeweled and perfumed with incense, be still, and be grateful.

*An earlier version of this column named the wrong building.