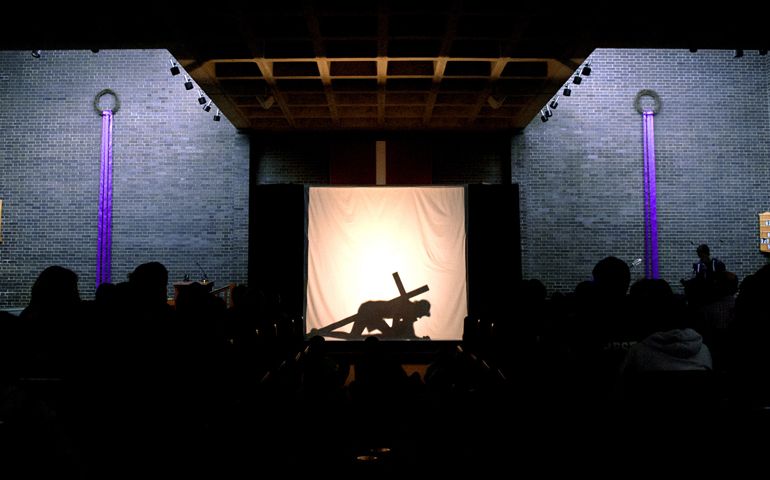 Teens perform a shadow Stations of the Cross on March 30, 2014, at Church of the Resurrection in Fairport, N.Y. (CNS/Catholic Courier/Mike Crupi)

I went to Mass on Ash Wednesday in a hospital chapel in Southern California. Nurses and doctors and staff, as well as a few patients, joined me. But most of us gathered that day were the friends and family members of the ill and the dying. We were afraid to leave the environs of the hospital for Mass. We know how quickly the world turns -- or worse, stops turning. We were strangers who felt very much like a community, the people who needed no reminder that we are dust and unto dust we will return.

We were, after all, standing in dust: the rubble of hopes and plans. The chaplain's office volunteer, who was coordinating the distribution of ashes to the patients, did so from an electric wheelchair. Her hands were splinted to reduce spasticity and prevent contracture. Her motionless feet were strapped in place. On a floor high above me, my sister was in an ICU bed, her body surrounded by monitors. She was still intubated but was being brought out of the drug-induced coma in which she had lain for a week. In the cubicle next door to hers lay a man with a broken neck, who -- in that hazy period when the last pain meds are wearing off and just before the next dose is given -- would demand, "Give me back my bass guitar."

We did not need to be reminded of the dust from which we came. We needed to be branded with the clumsy cross on each of our foreheads, a sign befitting our clumsy circumstances. We needed to be marked with that sign of hope, the sign of the one who promises to gather our ashes and our dry bones and bring them, once again, to life.

We came from dust. We will be dust again. But not forever, not finally.

I spent the last Friday of Lent in a nursing home in Amarillo, Texas, with my last living maternal aunt and my mother-in-law. My long-widowed aunt had kept happy company with a man she met in the home. He died this winter, and I told her how sorry I was to hear of his death.

"Yes, it was hard," she said, patting my hand. Then, after a moment, she asked, "Now who are we talking about?"

My mother-in-law, who lives one floor above my aunt, needs no reminding; the dead are with her. Her parents, her husband, aunts and uncles and cousins and friends -- they come to visit, and some of them stay by her side. Sometimes, Leonard, my father-in-law who died eight years ago, is out getting her chocolates. She says she's thinking of playing the organ again. She tells me, "I want to go to Amarillo."

I tell her, "We're in Amarillo." She looks accusingly at me and I know that she is right and I am the demented one here, for this isn't Amarillo. At least, it's not her Amarillo, because that Amarillo no longer exists. In her town, she paints and cooks and sews and gardens and plays the piano and organ in her parish church.

I will spend the last Saturday of Lent 45 miles south of Amarillo, in Tulia, in the nursing home wing of the county hospital where we had gathered to celebrate my paternal aunt's 94th birthday. We watched jerky, faded home movies from the late 1940s: my aunt and uncle running from the church on a cold winter's day, her white satin gown billowing in the wind. We watched film of my uncle and my grandfather moving irrigation pipes and we watched, wondering, at long shots of water gushing from those pipes, water standing in the plowed rows. Her nephew, the one man in the room who still farms in Swisher County, shook his head at a sight he could hardly imagine, but which now belongs to imagination alone. There is no more water to be drawn up and pumped out.

I spent Palm Sunday in Amarillo with my mother-in-law. I rose and went to early Mass, then returned to sit with her at the service a volunteer conducts each Sunday morning in the chandeliered parlor of the nursing home. There were 26 residents in the room, only six of them men. The leader asked them to explain freedom from a scriptural point of view. One man with rough farmer's hands, his back bent almost double, a thick plastic hearing aid curved around each ear, spoke up in a strong voice, "Well," he said in the drawl of my childhood, "I can think of three passages that define freedom. The first is Romans 8:2: 'For the law of the Spirit of Life in Christ Jesus hath made me free from the law of sin and death.' "

I crane my head to see him, this old man who knows these words by heart. I rummage in my purse for a pen and paper to write down the citations, because I'm paying attention now.

He ended, "And, of course, there's Jude 1, which speaks of the free, 'them that are sanctified by God the Father, and preserved in Jesus Christ, and called.' "

He draws out the word "called," and a lifetime of study and prayer is reflected in his slow enunciation.

Easter will be filled with grandchildren. Three-year-old Clement, who wants to be a knight but who would agree to becoming a saint if he can have a sword, will ask the question that has gripped him these weeks: "Why didn't Jesus just kill those bad men who wanted to hurt him?"

I wonder that, too, though less now than when I was younger. I've had enough of death. I want to spend this season with the opened tomb and the moved stone and Christ's breath-giving life to men huddled in fear and darkness. Because I know that fear and darkness will be banished. The dry bones will rise and dance.

In all the dust of Lent, I had glimpses of the rising. My sister came back to us. Our aunt found love again. My mother-in-law is never alone. An old man keeps the words that have kept him. The land my forebears worked so hard to till still bears fruit, and those who farm it have grown in wisdom. And my oldest living aunt pronounced her birthday "perfect." She can neither stand or walk unaided nor leave her small room. But we were together, and we know how blessed we are to be together, and that was enough.

Spirituality | Amid the dust of Lent, glimpses of the rising