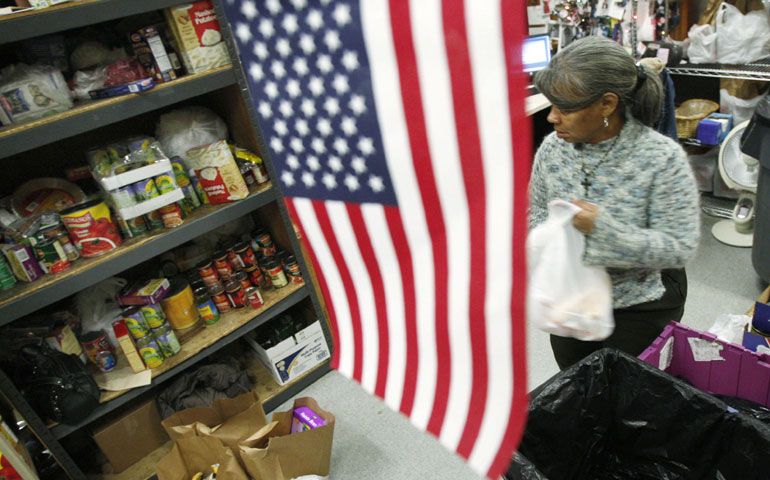 Volunteer Linda Robb fills up a bag with food at the Bread for the City food pantry in Washington in 2008. (Newscom/Reuters/Jim Young)

It's Aug. 20 and I'm listening to NPR's "Morning Edition" program. Pam Fessler is talking about charitable giving. She cites the study by The Chronicle of Philanthropy, in which patterns of giving are considered zip code by zip code. In an accompanying article on NPR's website, Fessler writes, "It turns out that lower-income people tend to donate a much bigger share of their discretionary incomes than wealthier people do. And rich people are more generous when they live among those who aren't so rich."

That makes me think of Joni Johnson, a longtime friend of my mother's. Joni married her husband, Dudley, when she was 15. During the Great Depression of the 1930s, they were sharecroppers, a cruel job in the best of times. By the time they moved to Amarillo, Texas, they had settled into the ranks of the hard-working poor. There was enough money to buy a small frame house on the city's northeast side, out near the fairgrounds, and an Airstream trailer for fishing trips to Palo Duro Canyon.

One day, Joni's neighbor came to the door. The baby had been sick. They had spent the grocery money on antibiotics. There was nothing in the house to eat.

Joni beckoned him inside and took the man to her kitchen. She gestured at the cabinets and refrigerator. "You can have half of everything I've got," she said.

Half of everything Joni had wasn't much, but it turned out to be enough, for her and her neighbor.

I imagine giving away half of what we own. For one thing, the poor person at my door would need a moving van.

I'm tracking with Fessler. She mentions that areas with more churchgoers also tend to have higher rates of giving. She speaks to Peter Paneto, the Chronicle's assistant managing editor, who says that religious giving makes up the bulk of U.S. donations. He adds, "States like Utah and Alabama and Mississippi all end up very high on our list. And states where it has more of a secular mindset, particularly in New England and all along the coast, tended to show up lower on the list."

Joni certainly gave out of a desire to be like Jesus. She had been given daily bread -- if not much in the way of butter and jam -- and she would share the gift.

The rich man in Jesus' parable of Lazarus proves it's possible to step over the beggar lying on one's doorstep. But, the Chronicle seems to say, it would be even easier if Lazarus lived far away from the rich man, who then never had to see, or sidestep, his sore-covered body.

Professor and social psychologist Paul Piff of the University of California, Berkley, tells Fessler: "Simply reminding wealthy people of the diversity of needs that are out there is going to go a long way toward restoring the empathy or compassion deficit that we otherwise see."

The segment is almost over and here comes the "What Have We Learned Today?" kicker. And that's where Fessler and her posse of experts lose me. Citing Kristen Valentine, the director of Bread for the City in Washington D.C., Fessler says, "The big bucks are still in the wealthiest neighborhoods. The key is to get those who live there more attuned to those in need. That means having nonprofit clients tell their stories more often, and providing more volunteer opportunities, so people can see the need firsthand."

And don't forget carefully constructed volunteer opportunities, which must be provided, in order for the rich and poor to mingle, speed dating with a refurbished house and a hot, nourishing bowl of soup at the end of the night.

There is never a mention of unconstructed, unprovided, unstaged "opportunities" -- which are not opportunities, but life -- for people to tell their stories.

Early in the piece Fessler quotes the Chronicle on the relationship between churchgoing and charitable giving. Could it be that church is a place where men and women gather to hear their stories and tell their stories and pray for one another and sign up to visit and take casseroles to the sick? Not that church was designed for interclass mingling, just that mingling is what happens when people come together to worship.

I think of my own, diverse downtown parish. We are across the street from the soup kitchen, so Lazarus is never far from our door. And, yes, we step over him, too. But church is the place, the one place in my life, where others, consistently, without fail, stop us and bid us look, and help. Church is the place where we watch others bend down to help Lazarus rise. We learn from them, the ones who give in grace and the ones who receive in grace. Their witness convicts us.

Church is the place where we hear Lazarus' story, and the story of the rich man, told. It's where we hear the ending of the story, that a person who can't see another human being in need turns out not to be able to see God, either, and so winds up wandering and living far from God's face.

In my parish life, we're not poor and rich, we're just parishioners. The tile layer serves on the parish council with the high-tech exec. The retired school cafeteria cook organizes hours of adoration with the lawyer. And, no, we probably would never have come to know one another, much less love one another, without the church.

In a true community, the balance of need is always changing. Material wealth means little when your child dies of an overdose. And it may be the woman rich in faith but bereft in investments who becomes your rock through those dark days. It may be the child in need of counseling and tutoring, or even a home, who restores joy to a life rich in stuff but poor in meaning. Ask the people in local Protestant churches in my town who have set out to adopt all the children currently in the Colorado system out of foster care. Who benefits? They say, "All of us. We are all given a gift."

To nurture unity, bring back the Angelus

How we see and know daily holiness

A Photoshopped version of femininity

Wantonly, casually, we watch the water of life drain away