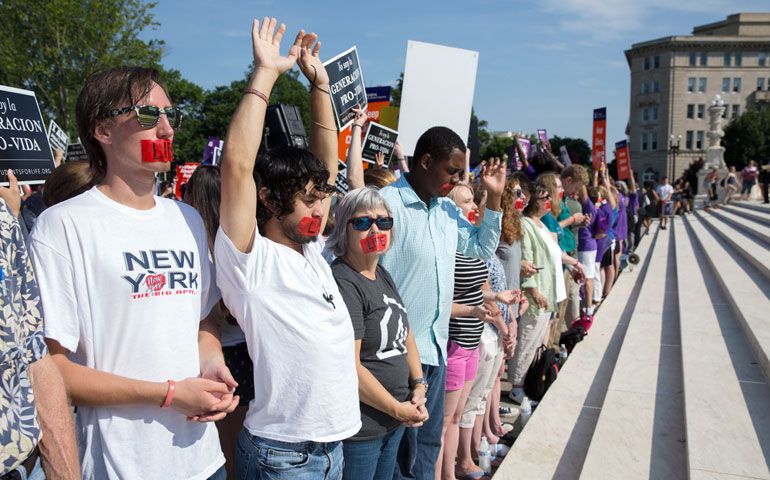 Pro-life supporters pray at the steps of the U.S. Supreme Court June 27 during protests in Washington. (CNS/EPA/Michael Reynolds)

Attorney General Loretta Lynch testified before a senate committee last March, saying that she has discussed internally the possibility of pursuing civil actions against "climate change deniers." She said that she had "referred it to the FBI to consider whether or not it meets the criteria for what we could take action on."

In July, the Democrats ratified a party platform that requests "the Department of Justice to investigate allegations of corporate fraud on the part of fossil fuel companies accused of misleading shareholders and the public on the scientific reality of climate change." This plank was ratified by a unanimous vote by the platform committee.

Pay attention to this phrase in the Democratic platform: "the scientific reality of climate change."

Denying science, "best science," as the platform has it, is so dangerous that the prosecutorial powers of the federal government should be brought against the perpetrators.

Science was much on my mind June 27 when I watched the rejoicing outside the Supreme Court over the Whole Woman's Health v. Hellerstedt decision. The ruling was a resounding victory for abortion advocates, and a warning that no restriction on the practice of abortion will be tolerated.

President Barack Obama responded to the ruling: "We remain strongly committed to the protection of women's health, including protecting a woman's access to safe, affordable health care and her right to determine her own future." He speaks of women's health. There is no mention of the health of the unborn.

I wondered what Obama's response would be if a fossil fuel company, say, Exxon, couched all its exploration and drilling in terms of the health and safety of human consumers. It's good not to freeze to death in the winter. It's good for people in hospitals and schools and libraries and on city streets to have reliable electricity. People on respirators and in incubators need to know that their power sources will not be compromised.

I wonder what the president's response would be if Exxon said, "We remain strongly committed to the protection of human health, including protecting a man or a woman's access to safe, affordable energy."

Judging from his record and from the Democratic Party platform that he will no doubt endorse, Obama and his designated successor, former Secretary of State Hillary Clinton, would argue forcefully not only for the needs of the environment to be considered, but for the full force of the law to be brought against those who do not.

Remember: "The scientific reality of climate change" is not only science, but, according to them, it is "best science," or, in another popular phrase, "settled science." No questions allowed.

I hope they would argue that it is time for us to grow up, and to stop treating the environment as a chattel possession and to recognize it for the living organism that it is. And then I would ask them to use these same arguments and consider another piece of best, or settled, science: the humanity of the unborn.

What are we to make of another court appearance on June 27? This was the final sentencing of a former Ohio college student, convicted and given a sentence of life without parole for placing her newly born daughter in a trash bag, where the baby died.

If a doctor, at any point in the pregnancy before natural labor and birth, had aborted the baby, the young woman could have joined others posting their pictures wearing "I had an abortion" T-shirts and tweeting #shoutyourabortion. She could have been among the throng cheering on the steps of the Supreme Court instead of standing before the Ohio criminal court. But the judge ruled against leniency in sentencing, saying, "It was an inconvenience, and you took care of it."

When does "taking care of an inconvenience" become a crime, rather than an acceptable reason for abortion? Isn't "taking care of it" what strong, independent women do? Was the baby human or not? When did it become human? By what alchemy did a "product of conception," which can be destroyed for any reason during the nine months of pregnancy, become a human being whose life has value and meaning before the law?

The federal government is determined to protect, applaud and encourage abortion. It will stare as myopically as any fossil fuel provider ever did at half of the equation and refuse to acknowledge the missing piece.

No matter what science -- not religious revelation, but science -- reveals about the human life of the unborn, abortion advocates refuse to consider the other half of the equation. They will ignore or deride or dismiss the scientific fact that human DNA is present from the moment of conception, or that the human heart begins to beat 18 days after conception. That same heartbeat is detectable with a stethoscope just about five weeks later -- welcome news if you want the baby, but a fact to be ignored if you do not.

And if you do not, the baby-that-dare-not-be-called-a-baby can be poisoned or broken up and vacuumed out or decapitated and manually extracted piece by piece. The Washington Post's Wonkblog calls such scientific and explicit language about the fate of the unwanted unborn "gruesome."

The editorial staff and reporters at The Washington Post do not consider reports of rising ocean levels or photographs of shrinking icebergs or forecasts of droughts and floods and mass starvations to be "gruesome." No, that's just truth, and, however hard, it must be told. Why? Because it's science, "settled science," "best science."

Ultrasound images of babies swallowing and hiccupping and kicking, babies with human faces and human limbs and human hands? If you want to see a human face, go for it. Let the Facebook posts of your unborn baby sucking her thumb go far and wide.

If you don't, look away, and deny what others see there. That may not be science, but it's the law in this year of magical thinking.

Bishops: If passed, Equality Act will 'discriminate against people of faith'

In the 40 days till the election, we can become 'Moses-style' politicians

Vandalism at Denver's cathedral is latest incident against local churches