Domino got a good schooling in prison 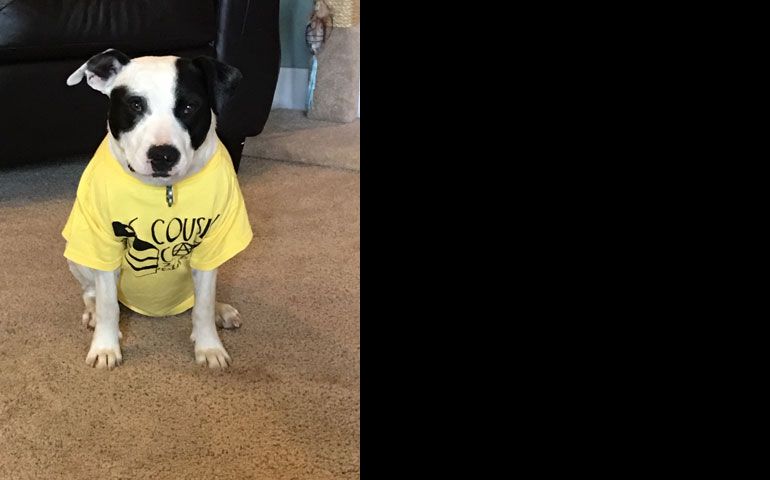 Domino, a dog who looks like Pete from the old "Our Gang" shorts, lives for two things: the return of my granddaughter home from school each day, and tunneling under the fence to escape, presumably to find my granddaughter.

The tunneling generally leads him to the neighbor's yard, where he makes his way up to the porch and through the pet door to the bed of their dog, Bodie. Domino settles down in the borrowed bed for a nap. If my granddaughter comes home and Domino isn't there -- tail thumping, quivering with delight at the sight of his mistress' safe return, ready to flip on his back and get a tummy rub -- she goes next door and retrieves him.

We wonder if Domino got the jailbreak urge in his former home in one of the Colorado state men's correctional facilities. He was trained there as part of a program called the Prison Trained K9 Companion Program. We know for sure that's where his affectionate nature was recognized and encouraged.

Domino started life -- first strike -- as a stray. He was found abandoned by the side of a New Mexico highway and sent into the Pet Animals Care Facility Act system, of which the Prison Trained K9 Companion Program is a member.

In some ways, Domino was lucky. The program has received other dogs that have been actively mistreated, beaten or shot or collared as newborn pups and then let go, the collars growing into the flesh around the dogs' necks. Domino started life as a healthy stray, but -- here's the second strike against him -- as a pit bull mix stray. This is not a desirable combo breed, like the labradoodle, but one that is often euthanized.

A prisoner, a man who knows something about abandonment and rejection, kept Domino from that third strike.

The imprisoned are a huge and growing -- though mostly hidden -- population in our midst. In Colorado, about 380 of every 100,000 of its citizens are incarcerated. That puts us somewhere in the middle between the state with the highest rate of incarceration, Louisiana -- where around 1 percent of the total male population is incarcerated -- and Maine, which has the lowest rate of incarceration. Both geographically and statistically, we are in the middle of a country that incarcerates more of its citizens than any other nation on Earth.

Some of these prisoners will die behind bars. Others will be released, but to what? How will they find jobs, housing, a new beginning? One of the answers in Colorado may be found in the Colorado Correctional Industries, a consortium of 60-plus businesses that are for-profit and prisoner-staffed and run.

Colorado Correctional Industries, for instance, operates the largest water buffalo dairy in the world, as well as the largest goat dairy in the state. In cooperation with the Federal Bureau of Land Management, the Wild Horse Inmate Program (WHIP) trains wild mustangs for adoption to qualified owners. Since 1986, Colorado inmates have trained some 5,000 wild mustangs.

They fight wildfires through the State Inmate Wildland Fire Team (SWIFT). They grow grapes for Abbey Winery. And they trained Domino, who sleeps by my granddaughter's bed each night and sits, grudging but patient, as she dresses him in her old Cousins' Camp T-shirts.

I talked to Debi Stevens, who is the supervisor of the dog-training program. She told me that since it began in 2002, more than 10,000 dogs have been trained in Colorado prisons. One member of the original group of trainers is still there, 14 years later, and still working with dogs.

Family dogs -- including Colorado Gov. John Hickenlooper's dog, Skye -- are brought by their owners for training. These dogs, which account for 60 percent of the 10,000 total trained, board at the prison for four weeks while they learn good behaviors or unlearn bad ones. The fee from the private boarders helps pay for the rescue program that brought Domino into our lives.

Currently, the program employs 150 prisoners in Colorado. It's a privilege they earn through good behavior, and a job for which they are paid.

Once a prisoner is trained as a dog handler, he or she is matched with a dog that will share the prisoner's cell and participate in a 24/7 intensive program. The prisoner keeps a journal about the dog. The journal my granddaughter was given begins, "Today was Domino's first day. We spent the majority of the day bonding and just getting to know each other."

He went on to write that the dog reminded him of his childhood pet: "When I first got Domino my heart just sunk because he's the kind of dog I grew up having as a kid."

He cautioned that Domino won't need harsh reprimands. "I can already tell that he is going to be that dog that steals people's hearts."

He ended the journal, "I've had the privilege of spending the last weeks with Domino and they have been the best three weeks I've had in a long time."

Many freed prisoners find jobs at large chains like Petco or with veterinarian clinics or shelters. Some, Stevens said, open their own businesses as groomers, walkers, sitters or trainers.

By the end of the program, the dog will have learned to heel, to sit and to stay, even when the handler has disappeared from sight. They will learn to remain still and quiet in the presence of other dogs. They are housebroken and trained in a variety of agility exercises. The dogs are spayed or neutered, and given their shots. Each owner is given a 90-minute class before taking the dog home.

The $550 adoption fee, and not tax dollars, goes toward the cost of the training and medical care each dog receives.

We picked up Domino on a warm spring day, driving to the women's correctional facility in Cañon City. We took turns walking him around a yard fenced with metal, and topped with shiny rolls of razor wire.

Domino's trainer taught him all the standard drills and added another. He taught him to "say his prayers," which involves the dog placing his front paws on the trainer's forearm and bowing his head.

Domino's answer to prayer? A liver treat. And a little girl who loves him.

People | Domino got a good schooling in prison