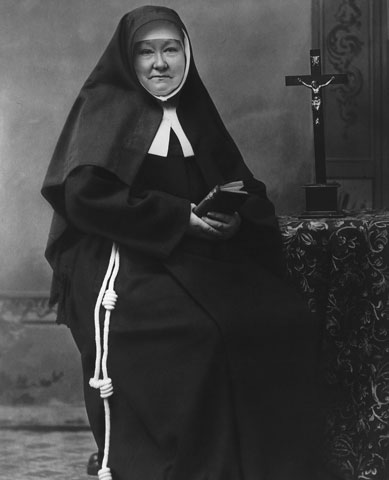 Just a year after the Sisters of St. Francis of Perpetual Adoration fled the Waldo Canyon fire threatening their mountain convent outside Colorado Springs, Colo., they are home and celebrating. On March 27, Pope Francis recognized a miracle attributed to their founder, Mother Maria Theresia Bonzel, paving the way for her beatification Nov. 10. Her cause marks a series of firsts: Bonzel was one of those named in Francis' first act as pope concerning the causes of saints. The miracle associated with Bonzel is the first Vatican-investigated and -approved miracle in Colorado Springs. And, to the best of my knowledge, Bonzel will be the first beatified person ever to be involved in a train robbery in Nebraska.

Born Regina Christine Wilhelmine Bonzel on Sept. 17, 1830, to a prosperous family in Olpe, Germany, she was raised to marry well. But she heard a call to religious life and followed it. In 1863, Bishop Konrad Martin of Paderborn, Germany, gave permission for the founding of the Poor Sisters of St. Francis Seraph of Perpetual Adoration under her leadership. The order would have at its heart prayer, the care of orphans, the poor and sick, and the education of the young. It is a call the sisters continue to hear and follow.

In 1871, the government took oversight and administrative control of Catholic schools and churches. In June 1872, the Minister of Public Instruction canceled the contracts of religious teachers and forbade future hiring.

In July of that year, the Jesuit order was placed under police supervision and prohibited by law from ministry in either churches or schools. The Jesuits left Germany.

In 1873, the Redemptorists, Lazarists, Fathers of the Holy Ghost and Ladies of the Sacred Heart were declared allies of the Jesuits and thus subject to the same laws and restrictions. These orders also left Germany.

Bismarck's minister of worship and education, Adalbert Falk, set out to make Catholic bishops independent of Rome. Ecclesiastical offices in each region could only be filled with the approval of the highest civil authority. He made the exercise of priestly duties without civil approval a criminal offense and took away the civil approval of every bishop who objected to the law. Under laws adopted in May 1873, Falk also restricted the scope and power of church tribunals to hear and rule on interchurch disputes and offenses.

Bonzel watched all this from her foundation in Olpe. She watched as Martin, who oversaw her order, was arrested and imprisoned after he publicly denounced the anti-Catholic "May Laws." She watched as her orphanage was closed by order of the government and the children taken away.

In 1875, not knowing what laws might yet be passed and what new restrictions on religious life might yet be put in place, she followed God and sent six sisters out of Germany to assure the continuation of their Franciscan way of life. The women began their journey to Lafayette, Ind., Nov. 26. They went to establish a foundation in a land they had never seen among people whose language they did not speak.

The sisters landed in New York City Dec. 12. They boarded a train to Indiana, and by the time they arrived in Lafayette, all their money was gone. Local Catholics helped them and the sisters begged help from other townspeople. By the end of the year, they had a hospital, St. Elizabeth's, and a convent in their first American home.

By 1884, the sisters had established hospitals in Lafayette and Terre Haute, Ind.; Omaha and Columbus, Neb.; Emporia, Kan.; and Cleveland. In 1884, they took over the Union Pacific Hospital in Denver. In 1887, they opened hospitals in Gallup, N.M.; Colorado Springs; and Grand Island, Lincoln and Kearney, Neb.

They admit patients irrespective of religious denomination, nationality, social standing or race. They show no preference for the rich. Their rule is "First come, first served." Those unable to pay receive the same consideration and care as those who contribute, whether much or little. All are objects of the sisters' solicitude, attention and care.

The same rapid expansion marked the sisters' founding of schools in the area later designated as the St. Joseph Province. By 1885, they had schools in St. Mary's, Columbus, St. Bernard, Humphrey and Platte Center, Neb.; and in Emporia, Kan.

Bonzel wrote to her American sisters often, sometimes daily. In 1878, she made her first trip to the United States. In Lafayette, Mother met Franciscan Fr. Ambrosius Janssen, who asked her to open a hospital in Columbus, Neb., where he was stationed.

Bonzel first wanted to visit the town. She and Sr. Deo Gratia set out on the train, which was stopped by robbers in the middle of the night on the Nebraska plains. Passengers fled the train and huddled together in a nearby hut. Bonzel and her companion prayed, asking St. Joseph and their guardian angels to protect them.

Learning of a mission church some miles from the train tracks, Bonzel called for the train to stop. They walked across the prairie, using the distant steeple as their marker, and made it in time for the 11:30 a.m. Mass. When Bonzel wrote about the trip, the robbers got very little attention; the focus was on making it to Mass and being able to receive Communion. Bonzel's advice for robberies, fires, wrecks and emergencies of every kind might be summed up this way: Don't stop praying, don't break the fast and keep looking for a steeple.

Bonzel isn't a camera-ready saint. In the few pictures we have of her, she looks doughy and old, and her descendants, sisters of today, dress in ordinary clothes, an offense against those who believe female holiness is almost always found wearing a habit. When I wrote last summer (NCRonline.org/node/31157) about the sisters evacuating the elderly residents of their nursing home and elderly neighbors as the sky glowed orange and ash rained down on them, I wrote what the sisters told me, that they asked Mother Maria to help them.

I've no doubt she did help them. A woman who was unwell, spoke no English and remained calm enough through a midnight train robbery on the American prairie to be chiefly concerned with getting to Mass on time, is a woman with a fleet spirit and a radiant heart.

Wondering if we can find role models better for our daughters than Miley Cyrus and Taylor Swift? Maybe it's time to look -- or look again -- at Mother Maria Theresia Bonzel and her daughters, who continue the work described by Hammer 140 years ago. They continue to care for people, "irrespective of religious denomination, nationality, social standing or race. ... All are objects of the sisters' solicitude, attention and care."

A version of this story appeared in the August 16-29, 2013 print issue under the headline: Don’t stop praying, don’t break the fast.