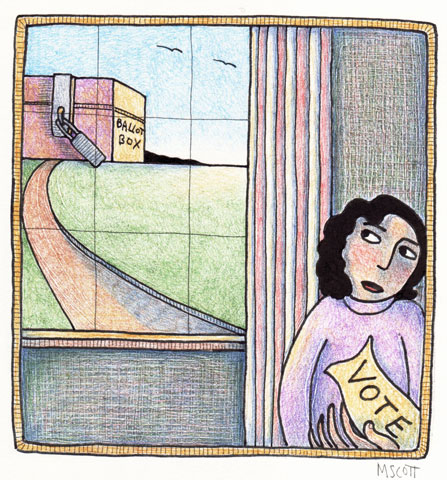 I don't plan to cast a vote for president this year. That is a painful decision for me, a woman who was raised to believe that the right to vote -- for every office from president to county commissioner -- is precious and must be exercised. That sense comes from the family to which I was born and the time and the place in which I was raised.

When the 24th Amendment to the Constitution -- which prohibited the poll tax from being levied in national elections -- passed in 1964, I was 12 years old, and living in one of the five states that still had a poll tax: Mississippi, Alabama, Arkansas, Virginia and my home, Texas. I knew about the poll tax because my parents were active in Democratic Party politics, the only party that mattered in the still Solid South of my childhood. My mother worked the polls on Election Day, especially the all-important primary election.

So important was the primary vote that we children teased our mother, "If Satan ran as a Democrat, would you vote for him?"

She would always reply, her comic timing precise, "Well, not in the primary."

Everyone, I would have said, comes to the precinct meeting and votes in the primary. But my everyone didn't include blacks. My everyone didn't include blacks in movie theaters (they had to sit in the balcony) or public restrooms (the Fedway department store downtown had one for women marked "White," and one marked "Colored") or restaurants (I was about 16 the first time I saw a black man in a restaurant and I remember being surprised).

One of the reasons blacks didn't vote was the poll tax, written into the Texas Constitution in 1902, six years after Plessy v. Ferguson became law. When I was growing up, the tax was $1.75, per person, per year. But if you were a sharecropper or tenant farmer clearing a few hundred dollars annually, that was a big fee. Suppose a husband and wife wanted to vote. That would mean a $3.50 tax.

Then suppose that a bad year, when there was no money for the tax, was followed by a better one -- a good crop, a little money to spend. You might go to the polling place, $1.75 in hand, only to be told what the law required: The tax was cumulative, one year's unpaid tax rolling into the next. So now the tax is $3.50 per person, and then $5.25.

My mother headed the Panhandle campaign for Kennedy-Johnson in 1960. I remember the day Ethel Kennedy, Eunice Shriver, Jean Kennedy Smith and Lady Bird Johnson flew into town. My mother was at the airport to meet them. She told us how the welcoming group of local women was disappointed when the Kennedy sisters got off the plane in sleeveless sheaths and low-heeled pumps, no hats, no gloves, no brooches, no charm bracelets, no furs. Lady Bird Johnson alone knew the crowd and was dressed, like those who met her, up.

I walked to grade school wearing a button that read, "If I were 21 I'd vote Kennedy-Johnson."

For her work in the campaign, my mother was appointed by President John F. Kennedy to the first Civil Rights Commission in the state of Texas. On Nov. 9, 1963, just 13 days before Kennedy was shot and killed in Dallas, the state voted on a measure to repeal the poll tax. The Rev. Martin Luther King Jr. wrote a letter to the people of Texas in the Dallas Express in which he spoke of "the dream of being free."

"In different parts of the South, we worked toward this goal in different ways," he wrote. "In Montgomery, we walked instead of riding the bus; in Birmingham, we faced fire hoses and police dogs. You must walk in Texas -- but simply to the polling booth to vote this Saturday." *

In 1964, my mother ran the local Democratic Party headquarters, where a record player sent a near-constant rendition of Carol Channing singing, "Hello, Lyndon," out onto Polk Street. I rode the bus there after school and played in the backroom where the boxes of button and stacks of placards were kept. (I have a "Housewives for Johnson" apron from that campaign framed and hung on a wall in my house.)

It was there that I met Farmer Schaeffer, the overalls-wearing poet from nearby Happy, locally famous for writing lengthy letters, all in verse, all about politics, to H.M. Baggerly, Johnson apologist, and editor of The Tulia Herald. If you look closely at my seventh-grade class picture, you'll see a brass Stetson hat button engraved with the initials L.B.J. on the white lapel of my collar.

Once Johnson won, he turned his attention to the poll tax in Texas, telling citizens, "The time for waiting is gone."

The Texas Constitution was amended to repeal the poll tax in 1966.

The last national election I spent at home with my parents was 1968. That year, the precinct meeting was at our house. When people walked in the door, they saw an autographed pictured of President and Mrs. Johnson on the wall in front of them. If they looked to the left, they saw the chairs for the meeting.

If they looked to the right, they saw my homemade banner, hanging from the top of the hall doorway to the floor. It read, "Hey, hey, L.B.J., how many kids did you kill today?"

I wasn't wearing a Humphrey button that year, and my politics would never again share the one-party fealty of my parents, but we always agreed about the importance of voting.

By the time my mother was in her 90s, and living with my husband and me, she could no longer fill out her ballot on her own. My husband got permission from the local election authorities to go into the booth with her and fill out the ballot as she directed. Straight Democrat all the way, with two exceptions, the only ones since her first vote back in 1940, for local Republicans who were friends of my husband and me. Both men came to her funeral.

Her last campaign sign was one that read, "Another old white woman for Obama."

I think she would be disappointed if I did not vote, even if my vote might cancel hers. I think she would share my disappointment in the candidates on the ballot. The loyal Texans who raised me never forgot Rural Electrification and other New Deal programs. But they never confused politics and political parties with the true source of our hope.

Several years ago, I was at Mass with one of my sons when a family with disabled children came in and took their seats. My son said, "This will be the sign of the church in the 21st century. It will be the last place where the disabled and the elderly, the ill and the imperfect are welcomed."

The only sign in my yard as I write is one asking people to vote "No" on Proposition 106, the assisted suicide bill that is on the Colorado ballot.

I am no less convinced of the importance, and the urgency, of the issues before us. But as I've grown older, I turn less toward political parties and their focus-tested candidates and more toward the church. I turn toward the church, where the call for peace is sounded, and the call for mercy goes forth. Where life -- even inconvenient, unplanned life -- is sheltered and valued.

I look again at King's letter to the voters of Texas in November 1963. It was a call from the heart of the church and it ended with this promise, "Our prayers will be with you."

* The earlier version of this article misquoted the letter from Martin Luther King, Jr., to the Dallas Express.

A version of this story appeared in the Oct 21-Nov 3, 2016 print issue under the headline: Electoral absence: I won’t go to the polls this year.