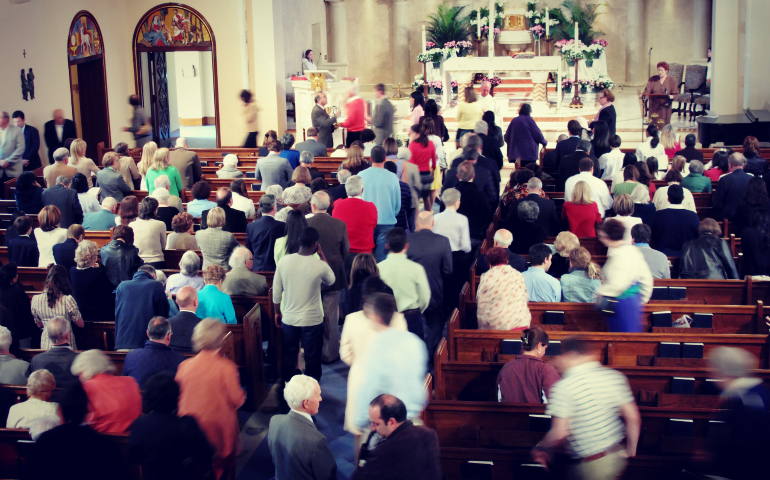 In an April Atlantic magazine article titled "Breaking Faith," Peter Beinart considers the decline in church attendance among Americans and how that decline degrades our politics.

As Americans have left organized religion, they haven't stopped viewing politics as a struggle between 'us' and 'them.' Many have come to define us and them in even more primal and irreconcilable ways.

Though Beinart looks at the effects of declining church attendance on all Americans, I'll stick with the white community where I have lived and worshiped my entire life. Beinart writes:

We know that culturally conservative white Americans who are disengaged from church experience less economic success and more family breakdown than those who remain connected, and they grow more pessimistic and resentful.

But I wonder just how "less economic success and more family breakdown" correlates with the findings Beinart cites of a 2008 University of Iowa poll showing "that among Catholics, mainline Protestants, and born-again Protestants, the less you attended church, the more anti-immigration you were." Because anyone who goes to church Sunday after Sunday knows plenty of people struggling financially, as well as socially with divorce and estrangement, addiction and suicide. And yet they are still more welcoming to immigrants? Less "pessimistic and resentful"?

If so, perhaps the question we should be asking is "What do we learn when we go to church?"

On Laetare Sunday, my husband and I noticed a young woman slip into the pew just ahead of us. She was dressed in a T-shirt and tights. Her hair was tangled. She looked ready for bed, or an exercise class, not Mass. Without exchanging a word, I knew my husband and I were both wondering why she couldn't have put on a dress and combed her hair.

The priest invited the catechumens and their sponsors to step out into the aisle. He invited the community to gather around them as we prayed. The young woman knelt on the floor. I put my hand on her shoulder. My husband was standing in front of her. She reached out and took his hands. We began to pray.

The young woman smiled as men and women and children drew around her, singing and praying. Her face was filled with light, adorned with peace. We shared an intimate communion with a woman we had already judged and found wanting.

A few months ago, a man came into Mass wrapped neck to feet in dirty blankets. He took his seat in the front row, hunched over and peering steadily at the floor. He looked weeks away from a shower or a washing machine or a night indoors.

When ushers began passing the collection baskets, they walked around and past him. Then my husband noticed the man reach under the blankets into his pocket and pull out some bills, wadded together. He raised them. My husband signaled the usher who, as surprised as the rest of us, went and took the offering from a man we had already judged as having nothing to offer.

Most Sundays at church, I pray and exchange the sign of peace and share a cup with people I might never otherwise encounter. Because most of the non-family-related encounters in my life are organized around employment and income. I eat and drink with family and friends and colleagues and I only share a common cup and a common plate with family.

Except at Mass, where I must take the cup after a scary stranger who is also, and this remains a great mystery to me, a family member by virtue of our being gathered into the body of Christ. The brother I would never claim, the sister I would never own are here, beside me, and I must claim, must own them or admit that what I profess, that upon which I have built my life, is a lie.

And here's another mystery: I often leave Mass still irritated, unsettled and in disagreement. I still think that young woman should dress differently for Mass than for the gym. I still wouldn't voluntarily sit next to the blanket man on the bus, that is, if I rode the bus. No magic happens at Mass to make our differences and disagreements disappear.

No magic, but this mystery.

What happens is that we are invited to gather on Sunday and we don't get to send out the invitations. We don't get to curate the guest list as we curate the rest of our lives. We're stuck with one another, and whoever else walks in. And we don't get to retreat to our corners. We sit next to each other. Close. We are asked to be quiet and listen to disturbing stories of One who reaches out and embraces the people we work hard to avoid. We hear that we — our people — were wanderers and aliens and refugees, and that our story's end is bound up in how we treat those who are now aliens and wanderers and refugees.

Mass is not a friend group. It is a family, chosen for us, not by us. "The peace of Christ be with you" is not a suggestion that we meet for coffee, but a declaration that we are brothers and sisters in Christ.

And what we have to offer one another, what we must offer, is what Christ offers us, "a peace that passes human understanding." Human understanding often reaches only to the outmost circle of the tribe, but the peace of Christ passes ever outward, one person at a time, embracing and gathering in.

"The peace of Christ be with you." We learn to offer, and even live, those healing words by gathering again and again and again and having the sharp edges worn down. Just a bit, just by looking in the eyes of the stranger in the pew and finding another human being looking back.

Do that over a lifetime and you see what church is about, which is a kind of sculpture, revealing, chip by chip — to ourselves and to one another — the face of God in whose image we are all made.