No gift of children's innocence for baby Jesus 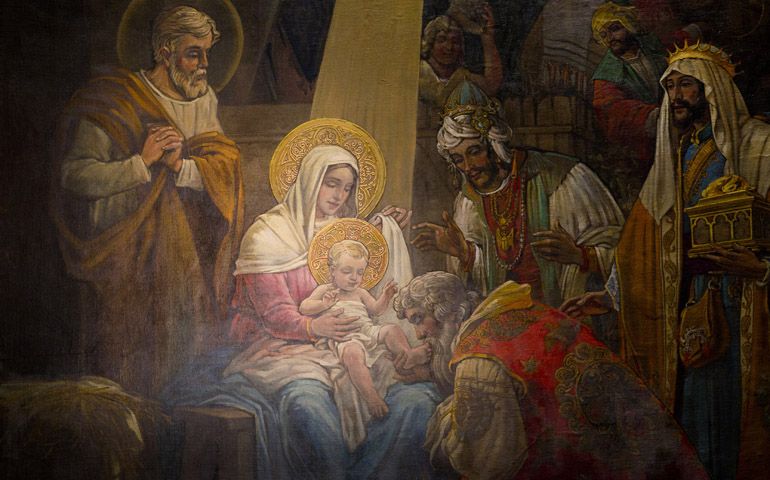 The adoration of the magi is depicted in a painting in the Cathedral Basilica of Sts. Peter and Paul in Philadelphia. (CNS/Nancy Phelan Wiechec)

I'm writing on Dec. 28, the Feast of the Holy Innocents. Like most Americans, I've been thinking a good deal these last two weeks about children and murder. I do not dwell on the lost children of Newton, Conn. I have my own small grandchildren around me. We do not speak of the murders, except to pray for those who mourn, and we never turn on the television.

Lucy tells me in a hushed voice that Santa "comes from the highness." I listen to Mary Clare sing her spirited rendition of "Here Comes Santa Claus": "He's makin' a mess and checkin' it twice. Gonna find out who's naughty and nice." And I do wonder, cannot help but wonder, what similarly sweet sounds play in parents' and grandparents' heads, memories alone now, never to change, a store never to be replenished.

Of course, some sense of horror and dread filters down even to the smallest children. At Mass on Christmas Eve, Leo, who had turned 3 years old the day before, announced he was going home with Grandpa and me.

"But, Leo," I said, "you have to go home and go right to sleep. When you wake up, something wonderful will be waiting."

"I know," he said, sadly. "Santa." And here he scowled, clinched his fists menacingly, and growled, "Claws!"

Leo wasn't just looking forward to a sleepover with the pushovers, he was looking for shelter from a home invasion.

Between the prayers "for the families in Newtown" he heard around the Advent wreath and at church and the sorrowful whispers of adults, Leo had sensed an unsettling truth: Terrible things happen, even to children who go right to sleep in their own beds, expecting to awake and find something wonderful waiting.

I'm wondering today about the baby and the child Jesus. Did he know how many children, little Jewish boys like him, died in his place? Died because of his birth? Died in King Herod's mad hope that one of the dead was Jesus, son of Joseph?

Did young Jesus, both child and Lord, hear the stories told by the women drawing water from the well? Did he listen as Joseph and the other men sat in the evening remembering the dark days of Herod, when he hunted down the infant boys and killed them all?

Did Jesus ever catch the bitter words of those who could not forgive Mary and Joseph for fleeing to Egypt and safety?

Did he know by heart the words the Jewish evangelist Matthew records?

A voice was heard in Ramah,
Sobbing and loud lamentation;
Rachel weeping for her children,
And she would not be consoled,
Since they were no more.

Did he ever hear how few boys his own age lived in and around Bethlehem?

From my earliest childhood, I learned that Jesus took my sins and the sins of all -- the dead, the living and those yet to be born -- into himself as he suffered on the cross. All my life, I've wondered what it would mean to know, in one's very flesh, "every boot that tramped in battle, every cloak rolled in blood."

What pitiless suffering, to enter the mind of the hunter and the hunted, to experience the killing and the death, and the grief of those left behind.

But I never thought until this year, during this Christmas season, of the first burden Jesus bore: Before he ever died for us, those little boys would die for him.

"Jesus, Lord at thy birth" strikes me as yet another sorrow as I sing it now. He would not be granted a moment of oblivion. The honest claim of not knowing or understanding, childhood's sturdy shield, would never be his.

Matthew, who surely grew up on the same stories as Jesus, tells of magi from the east traveling to Jerusalem, asking, "Where is the newborn king of the Jews? We saw his star at its rising and have come to do him homage."

The magi find Jesus. Matthew writes, "They prostrated themselves and did him homage ... they opened their treasures and offered him gifts of gold, frankincense and myrrh."

They also set Herod on Jesus' trail. Matthew says, "Herod is going to search for the child to destroy him."

A dream warns the magi not to return to Jerusalem and Herod's court.

An angel of the Lord appears in Joseph's dream and warns him, "Rise, take the child and his mother, flee to Egypt, and stay there until I tell you."

But for Rachel and her sons, there is no warning dream. There is no angel of the Lord. There is only death as a furious Herod "ordered the massacre of all the boys in Bethlehem and its vicinity two years old and younger."

I wonder if there was myrrh enough to anoint all those little bodies. I wonder if weeping mothers recalled the store of myrrh unused in Egypt. And I wonder if Mary and Joseph left the expensive gifts behind, too much for the trio of fugitives to manage on the run.

But I no longer wonder what Jesus, wrapped in swaddling clothes and lying in his mother's arms, knew. He knew it all, knows it all.

In John's Gospel, the evangelist tells us of Lazarus' death. He was Jesus' friend. Perhaps they were the same age. Perhaps they had grown up together. Perhaps Lazarus, too, knew the story of the little boys who died in Jesus' place. Perhaps this was part of their shared, and painful, history. We do not know. The evangelist does not tell us. But John reveals something of the nature of God in this story.

And here is what we know of God: Jesus wept.

No gift of children's innocence for baby Jesus

Mass is a family, chosen for us, not by us

Jesus calls us outside of the temple

Poisoned elderberry wine is no longer a comedic farce