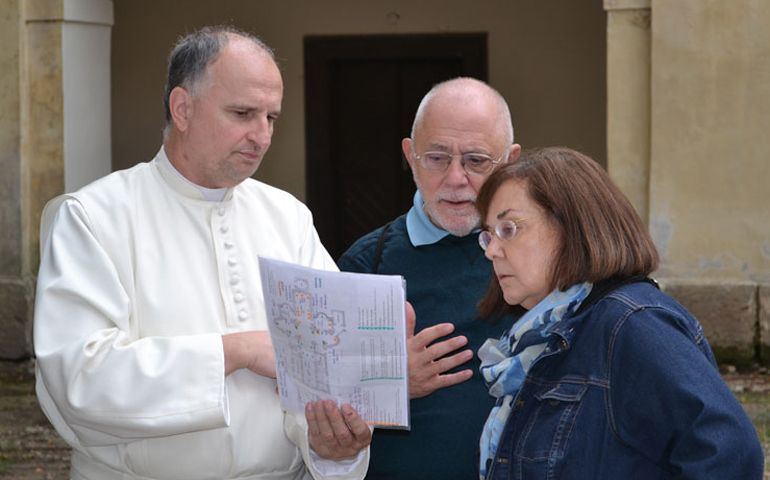 Doksany, in the Czech Republic, is about 40 miles north and west of Prague. Look it up on a travel site and you'll find a picture of the original Norbertine monastery, just outside the town. Norbertine nuns live in a simple, recently constructed building across the courtyard from the old monastery, which looks like the late 18th-century palace it is, or was. Go inside and you'll find a ruin. Crumbling window frames, with glass crisscrossed by spider webs and trapped dead flies, sagging ceilings streaked with water stains, warped floors, and cracked walls with holes punched for phone and electric cords, the electric cords snaking into filled outlet strips.

Fr. Adrian Zemek, the sole Norbertine priest in residence and pastor of the church, is, like his surroundings, worn, but he stands strong and whole amid the ruins.

I walk up two wide wooden flights of stairs to his quarters. The stairs are uneven and dimly lit. I try to imagine the trek to the first-floor bathroom, the only bathroom in the building, on a dark winter night.

We sit in his office and talk. He apologizes. Out here, near the border with Germany, he said, his German is good, but his English, he tells me, not so. Still, he is happy to answer my questions.

He shows me around. The room is a jumble of eras. An 18th-century ceramic stove, still used for heating the space, stands in one corner. Fr. Adrian shows me the firebox in the hall and the chute into which the wood is fed. A vinyl tablecloth, of the sort I remember from every 1950s American kitchen, covers the table. Ornate carved and chipped plaster cornices and wooden moldings look down on the vinyl flowers. Spindly houseplants sit atop the splintered sill and electrical cords run back and forth down the walls and across the floors. Beneath the window is a small portable radiator for the corners the fire can't reach. The damp from the light August rain has seeped into the room and it is chilly.

I ask Fr. Adrian how he came to be a priest. As he begins to talk, I'm reminded of my uncle's brother, Ed Dawson, who explained his World War II service by saying only, "I flew the hump." Nothing about a Texas farm boy flying 500 miles over the Himalayas between India and China in a small plane, with few reliable charts and no arms to fire back at the planes firing at him, and often without a radio.

Like Ed -- and like many people who have walked through the fire -- Fr. Adrian answers simply. He grew up in communist-controlled Czechoslovakia. Christians, he tells us, could not expect to enter certain professions. They could not, for instance, become teachers, for fear of their influencing students toward faith.

Men could become priests, but only diocesan priests. The government believed they could control the nation's bishops, who ordained the nation's priests. But it was forbidden to join or to be ordained an order priest. Order priests had brothers all over the world, and so had possible sources of support that the government could not control.

Fr. Adrian was serving in the Czechoslovakian army when he heard of a man, a priest, Fr. Hroznata Svatek, who had served time in a communist prison and, once released, was reaching lots of young people. Friends told him he should go and hear this man talk.

He did, and he too, was engaged and challenged by what the priest had to say. Though raised, Fr. Adrian says, by parents who were "people of faith," he had not thought of a priestly vocation. The schools, the culture, the government discouraged and punished those who did. What changed for the young soldier? He met a man in love with Christ.

Their talks continued and the two men, one young, one old, grew closer. At last, the priest confided that he was a Norbertine. And the young man eventually confided that he wanted to be ordained a Norbertine priest. The preparation was carried out in secret. The ordination took place in secret. Fr. Adrian recalls that he did not even tell his parents. "Too dangerous," he says.

So began a life of working whatever jobs he could find, all the while remaining true to his vows and to the life lived by the Rule of St. Augustine. There were blessed meetings with other Norbertines in hiding. And there was the glad day when the communists fell and the Norbertines could come out of the shadows. Much of their property was returned, including the church and other buildings at Doksany.

The property once again is in the hands of the Norbertines, but there is never enough money to repair and maintain it. The monastery church, the Church of the Nativity of Our Lady, today serves both the nuns, who sing the daily office there, and the local Catholic population. It is poor, but clean and cared for. One difficulty, Fr. Adrian tells me as we walk around inside, is that the interior temperature sometimes falls below freezing in the winter. He shows me the thin electric heating pads that run the length of each pew and says, "These help a little." He smiles and adds, "But people here know how to dress."

The communists fell out of power. Fr. Adrian never embraced power, either as a goal when it was beyond his reach or as a reality when it was within his grasp. He was ordained to serve, and serve he has, in hiding and in the open, always in poverty and always in faith.

Augustine ended his rule by admonishing those who follow it to regard the rule "as a mirror," and to read it once a week "so as to neglect no point through forgetfulness. When you find that you are doing all that has been written, give thanks to the Lord, the Giver of every good."

Augustine meant for the mirror of the rule to act for goodness as the glass mirror acts for vanity; it reveals flaws. Goodness then tries to correct flaws while vanity tries to hide them.

I ask Fr. Adrian for his blessing. I look at him, gray-haired and stoop-shouldered, his voice soft and his manner calm, and I know that he has so lived the rule as to become himself a mirror.

I need not say what I found when I heard his story and looked into that mirror, only to acknowledge Augustine's own admonition: "But when one of you finds that he has failed on any point, let him be sorry for the past, be on his guard for the future, praying that he will be forgiven his fault and not be led into temptation."

Folly to the Greeks

The Sound of Glory

Many gifts, one Spirit