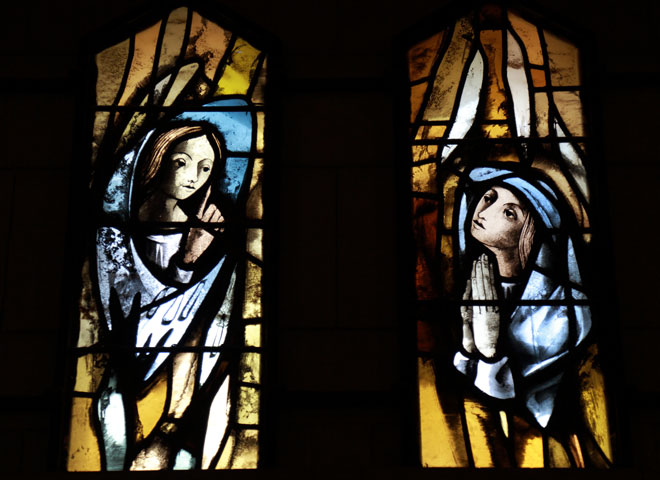 The Angelus is a simple prayer, a proclamation of the Incarnation, God coming in human flesh, and so making all flesh holy. (Dreamstime)

It is a cry being sounded again and again in the election debates and discussions. I hear it around my table when my friends and children gather. These discussions have set me to thinking, thinking about customs that are meant for every Catholic, and wondering what ancient practices of the church might be a fresh way of bridging the divides, so many and so deep.

The Angelus comes from a time when most people labored in the field like beasts of burden. They worked hard and still went hungry, subjected to the rain and cold, the heat and wind. But for a few moments, after the bells rang, they stopped, put down their tools, stood and prayed together, as free men and women.

They prayed the same prayer as the king in his castle or the queen on her throne. Workers, however lowly, were reminded of the first and final belonging, which was found not in their productivity, or the circumstances of their birth, but in their baptism.

They were joined in the prayer by those who owned the land they worked and, in effect, their labor. The lords and ladies were reminded, too, of an identity that does not depend upon wealth or high birth or class, but grace. It was a time to stop and be reminded that humans are not primarily workers or producers or consumers, neither masters of commerce nor wage slaves, but sons and daughters of God, whose true worth comes from the One who created and calls us.

Now picture it, a whole country of 21st-century Catholics praying the noonday Angelus: the executive in her corner office and the undocumented woman cleaning bathrooms at a rest stop along I-40. The father -- no longer able to work -- in a wheelchair in the nursing home. The mother -- working several jobs, not all of them paid -- calculating what remains on her EBT card and wondering if she can get off work and pick up the kids at day care and still make it to the food pantry before it closes.

All of us, whatever our economic or physical circumstance, pausing and praying together. We are united, we are one, and we are bound by ties stronger than class or culture. And we know it. We hear it. We see it.

What if the man who comes to the office to deliver sandwiches knew that the woman behind the partner's desk was stopping just when he did to pray, "The angel of the Lord declared unto Mary"? What if they stopped and prayed it together? What if that same woman executive walked into the rest stop bathroom on I-40 and heard the woman who cleans it whispering the Angelus as she stands over her mop and bucket? And then went and prayed it with her?

Time it: The whole prayer takes three minutes or less, a perfect length for the middle of a busy day. Just imagine the unity that three minutes could bring. Imagine Catholics all over the country -- whatever their class or culture -- knowing that they are together, praying morning prayer and noon prayer and evening prayer, as one body.

V. The Angel of the Lord declared unto Mary,
R. And she conceived of the Holy Spirit.
Hail Mary ...

V. Behold the handmaid of the Lord.
R. Be it done unto me according to Your Word.

V. And the Word was made flesh,
R. And dwelt among us.

V. Pray for us, O holy Mother of God.
R. That we may be made worthy of the promises of Christ.

Let us pray:
Pour forth, we beseech you, O Lord, your grace into our hearts; that as we have known the incarnation of Christ, your Son by the message of an angel, so by his passion and cross we may be brought to the glory of his resurrection. Through the same Christ, our Lord.

And how might that unity of practice transform the way we see one another? Treat one another? Vote and act and work with our brothers and sisters in mind? How easy is it to dismiss a person with whom one has prayed? That person has a face, and a name: son of God, daughter of God, brother in Christ, sister in Christ.

Why do we always assume that the answers to the problems besetting us are legislative, or judicial or economic or technological? Most of the answers come out of a healthy culture and a strong community. We have strong and healthy practices. It's time to reclaim them.

A version of this story appeared in the April 22-May 5, 2016 print issue under the headline: To nurture unity, bring back the Angelus.