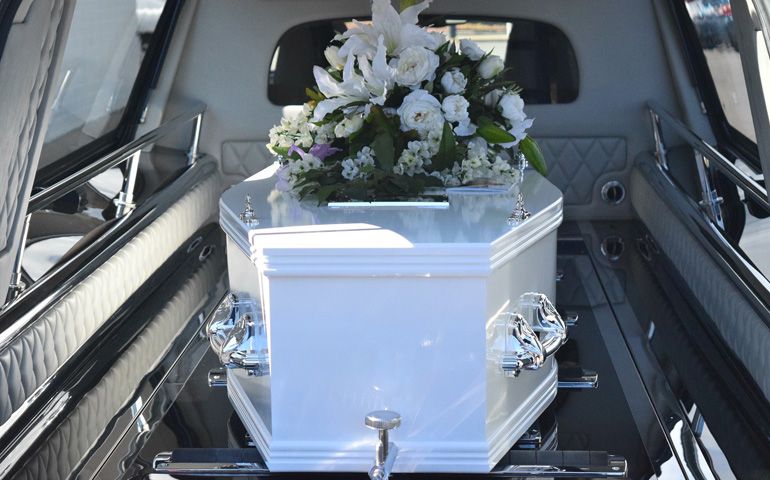 Somewhere along the way pallbearers became "pallaccompaniers" or "pallwatchers" as the funeral home staff took over the custody of the body. Funeral homes like to roll the casket — from the hearse into the church, down the aisle, back out of the church and into the hearse for the ride to the graveyard. I understand their preference for this practice. It's efficient and neat and safe. You have a cadre of trained pallrollers who've had lots of practice with the transfer and movement. It fits the goals of any business: do the work as fast and efficiently as possible while avoiding risk. But it's also brought the mechanics of business into that most human act of dying. Produce is rolled on a cart, cartons are stacked on carts, desserts are presented on carts, but humans are held, embraced, supported and carried.

We buried my 90-year-old mother-in-law at the end of June. She left detailed instructions for her funeral, including the request that her ten granddaughters bear her body into and out of the church and to her grave. In 2007, she had watched as her eight grandsons bore the body of her husband. This man, who carried their fathers and cradled each one of them, was himself, at the last, carried, his body borne to the earth where he was lain.

Her granddaughters were honored to be asked. They remembered Granddaddy's funeral and they were ready to carry the grandmother who had held each of them as babies and toddlers, changing diapers and wiping faces. They are young women, fit and strong. They are used to bearing: children and groceries and laundry, as well as the burdens of patients and students and colleagues. One is an Air Force officer. One cares for a seriously ill spouse. All the demands of work and home fall on her. These women know what it is to shoulder weight.

So we were surprised when the person in charge of funerals at my mother-in-law’s parish told us that her granddaughters could be pallbearers, but that they could not bear the pall. We were told it would be disrespectful and that, in any case, it is not allowed, even though the Order of Christian Funerals, approved for use in the dioceses of the United States by the National Conference of Catholic Bishops and by the Holy See, holds that the practice is not only respectful and allowed, but preferred:

"During the various processions, it is preferable that the pallbearers carry the coffin as a sign of reverence and respect for the deceased."

Well, we were told, it wouldn’t be safe. What if the pallbearers — these women who carry babies in their bodies and children in their arms, who lift a sick spouse and serve in combat zones, who help abused and battered women, who tend to the sick and teach the young — waver or stumble and drop the body? It wouldn’t be safe. As if there were anything about life and death that is safe, that can be guaranteed or sealed off from risk. If that is the concern, put those children down now. You might catch your heel and trip, dropping the baby. It can happen.

The casket and Grandmom's body, we were told, would be left in the hands of professionals. They would roll her from place to place while we watched. Being a watcher is a familiar role for us. We "join" movements and protests by clicking "like" on Facebook. We have been trained to keep our distance and let "the professionals" handle it. I sing Sacred Harp in a small group and like it because we’re amateurs doing it for ourselves. We don't watch a music video or listen to an auto-tuned, produced and downloaded song. We sing, without accompaniment, like humans have been doing for millennia, like parents do with a fussy baby as they walk the floor. It's risky. We go flat and lose the rhythm and have to stop and start over. We're not professionals, just people. I'm cooking now for the annual Cousins' Camp, which my husband and I host for our grandchildren. I'm not watching a cooking show. I’m cooking. I’m creaming butter and beating eggs and sifting flour. It’s risky. My kitchen's not up to code. I've sliced and burned fingers. I know from television ads that I can find, "in the refrigerator aisle at my local grocery store," premade cookie dough. "Just slice and bake for real homemade taste." But I don't want "real homemade taste." I want cookies I made. And so do my grandchildren. They know instinctively the difference between cookies taken out of a wrapper and cookies warm from the pan.

We reached a compromise with the parish. The professionals would roll my mother-in-law's body in, her granddaughters would carry her out. They would carry her to her grave.

When we live in community we carry one another, we bear one another’s burdens, we lift one another up. It’s risky. Sometimes we fall together and rise together. But there are always hands, reaching out, reaching up, holding, holding on.

We watched as our daughters and nieces — women who come from many places and who have chosen many ways to live — looked at one another, and together, as one, lifted the wooden box in which their grandmother lay. Their grandmother links them, through their fathers and back and back, to other times and other lands. They stood straight, their arms tensed and straining. They walked, carrying their grandmother home.

Nothing focuses the mind more intensely than death