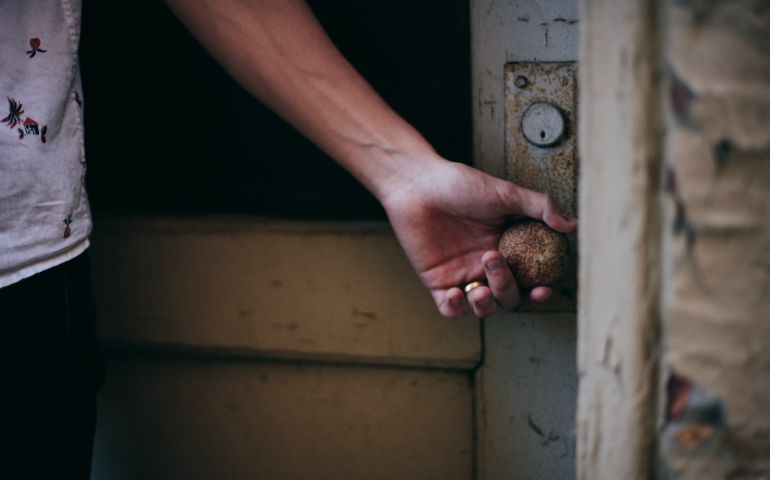 "If death was the way home, the door through which she must pass, then she prayed for death." (Unsplash.com/Michael Ramey)

My daughter and I are gazing at her daughter, born in the hours just before dawn on December 10. The baby still moves as she did in the waters of the womb, her arms waving languidly, the legs kicking in a way my daughter recognizes from her pregnancy. "Do you think she remembers?" my daughter asks. "I mean, I know she holds some memory in her body, but does she remember a before and after?"

What makes it home?

A month before my granddaughter's birth, my 95-year-old paternal aunt died in Tulia, Texas, the last of my father's family, the last to live in the town where I was born. I visited my aunt a week or so before her death. When I walked into her room, the aides were bathing her thin limbs, the skin faintly yellowed, like ivory. She smiled when she saw me. Then the familiar greeting, "Hello, darlin'," but no arms outstretched for a hug. She was frail and helpless as an infant, as the women ran the warm cloths up and down her body. I stood and smoothed the hair from her forehead while we talked. It was an exchange we knew by heart: She wanted to see her husband and her parents and her brothers; she wanted to go home.

It isn't that my aunt wished to die. She was still glad to see us — her children and grandchildren and nieces and nephews — and hear about our lives. She chuckled when I told her how our 5- year old grandson, the son of a woodworker, complained to his pre-K teacher about the scissors, asking, "Why are these so dull?" and then explaining, helpfully, he thought, that, "they would cut a lot better if they were sharpened."

She liked a good story, right to the end.

My aunt was glad to see us, but we were, and are, part of a world that was no longer home to her, no longer home because the people who made it so, who defined "home," had gone on before. Gone were the first voices she ever heard, the first faces she ever saw, the first hands she ever held. Gone was the husband who courted her and married her in a February blizzard, the husband with whom she conceived and delivered and raised their children. And my aunt longed to join them. If death was the way home, the door through which she must pass, then she prayed for death.

One of the astonishing things we have learned about life inside the womb is how early babies begin hearing voices and other sounds from outside the womb. According to pre-natal medical research, my granddaughter would have begun turning her head towards the voices of those who welcomed her at birth at least three months before that day.

My granddaughter was learning home before she breathed air or saw sunlight or felt the touch of a hand. It is a surprising world into she has been delivered: such vast, dry space. She settles when she is held tight — "squashed," my daughter says — into a cocoon like the one in which she was first cradled. She coos when she is lowered into a warm bath, the watery world familiar, known. But her delight is in the faces and voices and embrace of her little tribe. She turns her head to the known voice, peers steadily into the eyes of the one who holds her and talks to her. She arches her back and opens her mouth, sticking out her milky tongue, working to respond, to let us know she sees and hears. She makes a soft song of contentment at her mother's breast. After a time, the familiar arms and the familiar voices lull her to sleep, fed and full, safe at home.

I do not doubt that the dying, like the unborn, hear the voices of those waiting to welcome them, though I don't know how it happens. In my experience they both see and hear the waiting, welcoming dead.

My mother longed for her mother as she died, and in her last months she would smile when she saw me and say, "Oh, my mother's here." My voice and my face become another beloved voice and face even as they remained my own.

My mother-in-law, mostly silent, nevertheless tells me that Leonard, her dead husband, is out "buying a new car." We just missed him. "Margaret says that mom's dead," she tells me, shaking her head at Margaret's confusion.

My maternal aunt says her husband, Mac, has "gone to Lubbock on business." She adds, smiling, "He's still big and strong." She asks me how old her mother is. I tell her the truth, "Well, she'd be 136 years old," I say. She laughs and says, "Oh no, that's not right." I don't know precisely how I have erred, the "she'd be," speaking of Mother Curry as though she isn't? Or the obvious mistake of assigning such an age, "136 years," to a living person?

I can't explain it, but I do believe the dying, like the unborn, hear the voices of those waiting to welcome them, a gift of God's mercy, given from our beginning to our end, preparing us to go from home to home.

In God we trust

Immaculate Conception is feast of hope for sinners, pope says