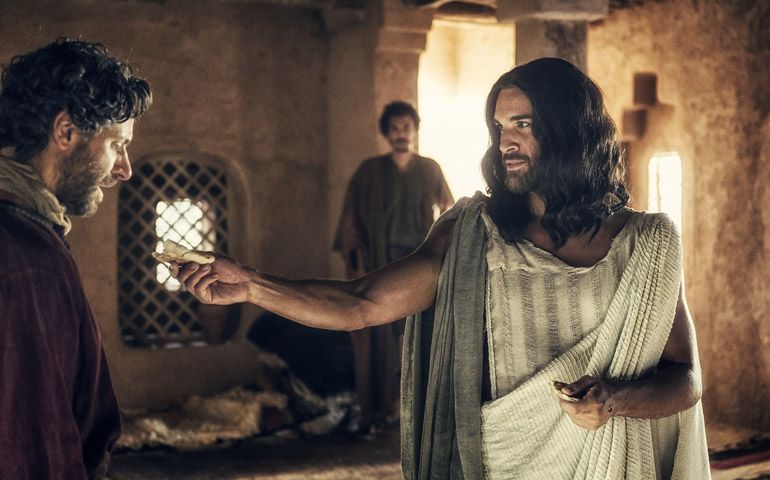 The NBC website for this new miniseries on the New Testament says: "The epic story picks up where 'The Bible' left off, exploring the aftermath of events following the Crucifixion."

Actually, this is a somewhat misleading statement. The opening episode of the 12-part series that premieres on Easter Sunday begins with Pilate's words "Truth? What is truth?" and images of the nails being forged that will fasten Jesus' body to the cross. We see once again, as in so may movies on the life of Christ, Pilate's (Vincent Regan) condemnation of Jesus; the crucifixion of Jesus (Juan Pablo Di Pace); Mary (Greta Scacchi) at the foot of the cross; Joseph of Arimathea (Kevin Doyle) asking for and receiving permission to bury Jesus; the burial; assigning the Roman guards to watch the tomb; and the resurrection of Jesus. Mary Magdalene (Chipo Chung) and Peter (Adam Levy) also play prominent roles in this episode.

The next episode (airing April 12) remains solidly in the Gospels with the post-resurrection appearances of Jesus to the apostles and disciples, as well as the ascension of Jesus into heaven. I am sorry they did not include Jesus' encounter with the disciples as they made their way to Emmaus (Luke 24:13-25.) It is my favorite part of the Gospels.

While the story includes most of the key narrative elements from the Gospels that we would expect to see before the series moves into the Acts of the Apostles and the coming of the Holy Spirit, the writers have imagined additional dialogue and intrigue that do amplify the story. (According to IMDb, six writers contributed to the series, and five different directors were at the helm of different episodes.)

At an NBC press day earlier this year, the first two episodes were made available to journalists. Executive producers Roma Downey and Mark Burnett flew in from Morocco, where filming was in progress, with some of the key actors, who reflect broad ethnic diversity. Downey said the reason for this and for the additional story development is so that everyone in the audience would be able to imagine themselves in the series and feel included.

The acting is quite good and believable in the first two episodes, with kudos to Chung and Levy in particular. I met the actor who will play Paul, Emmet J. Scanlan, and asked him what it was like to play this great figure in Christian history. He told me, and rightly so, that he didn't know. At that point, he was still Saul, and he had to remain in character!

NBC is promoting the series widely, hoping for the same success experienced by "The Bible" miniseries that aired on the History Channel in 2013.

I expected more, faster. I didn't think the filmmakers would take the first two episodes and retell the crucifixion and death of Jesus so thoroughly since, frankly, we have seen this story before. To be sure, for viewers unfamiliar with the life of Christ, it is good to lay the foundation for what will come after. The writers take great care to introduce us to the characters of the apostles and others we will meet again as the series continues.

I liked Scacchi's Mary; she is older than other Marys, a woman of few but well-chosen words, filled with a sure faith in the Resurrection. Di Pace's Jesus is up to the task.

There is one thing that did bother me as I watched the first episode. Everything was going along fine until the Resurrection, when an avenging angel dressed for battle appeared above the empty tomb, unsheathing a sword. It is a dissonant image. Does it mean the followers of Jesus are going to have to fight to continue as his disciples? Is God going to heap vengeance on those who killed Jesus? We know that the disciples of Jesus then, and now, will struggle and suffer martyrdom, humiliation and ignominy. But why does this image of violence from heaven have to enter into the story at this point? It reminds me of a holy card of St. Michael the Archangel.

There is no scriptural basis in the Gospels for it. In Mark (16:6), a young man dressed in a white robe told the women who entered the tomb to anoint Jesus' body, "Do not be afraid..." In "A.D.," the angel seems to say, "Be afraid; be very afraid." Luke has two young men "in dazzling clothes" (24:4) greeting the women, who were terrified, true, but the "men" put them at ease right away. Thus, I am sorry for this choice of a military angel, which only adds to the theologizing and justification of violence in our contemporary context. And if the angel is a symbol of Jesus' triumph over death, then the image is more dissonant than ever.

I am looking forward to the series moving into the Acts of the Apostles, one of the most interesting, and perhaps unknown and underappreciated, books of the New Testament.

Culture | 'A.D. The Bible Continues' kicks off with a familiar story

Can you question the virgin birth and still be a Christian?