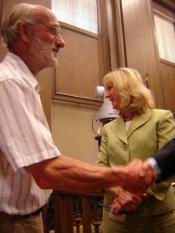 After 28 years of service at the Holy Family Catholic Worker House, Christian Br. Louis Rodemann was honored by the mayor and city council of Kansas City, Mo. with an official city proclamation.

Citing his efforts to feed the hungry for the past three decades - going so far as to even mention his time 'dumpster diving' for discarded food that could still be used in the nightly meal - the council called Rodemann someone who exemplifies the true 'Kansas City spirit.'

Beyond the official recognition, though, the council gave Rodemann something most people - let alone Catholic workers - get the chance to have: their full attention.

After presenting the award to Rodemann, Mayor Mark Funkhouser gave the former teacher the microphone. With most of the city council present, Rodemann did what he's done for most of his adult life: he spoke of the need for justice for the city's economically impoverished and marginalized.

Calling charity "picking up and dealing with the pieces" and justice "looking at the structures and systems that’s caused those pieces to fall apart," Rodemann asked the mayor and the council to make decisions on the basis of the latter.

"I think decisions are sometimes made for charitable reasons because we fear the justice that might come and the uncertainty of what those justice issues might be," said Rodemann. "I think when we are judged by how we treat people, how we deal with the consequences of decisions we make, it won’t be so much the charity but the justice that we will be rated on. Certainly we want to feed the hungry and shelter the homeless and be a companion to those who are lonely. But, as Dorothy Day said it’s sometimes the filthy rotten system that we sometimes neglect to pay attention to."

The city proclamation came as Rodemann was preparing to leave the Holy Family Catholic Worker community for a year long sabbatical June 4.

Why the new Apple iPad stinks

It's time to do something about gun violence

Getting a B.A. behind bars