After 50 years, the Palestinian issue is still on a slow burn 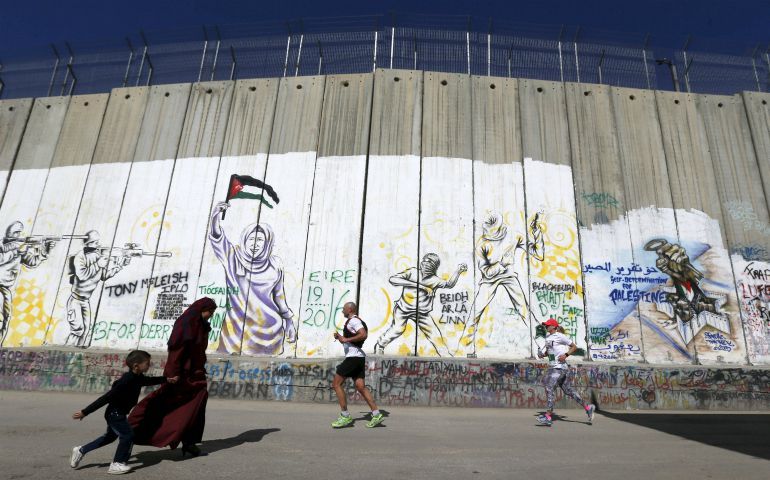 June 6, 2017, marked an ignominious anniversary, the 50th anniversary of the Six-Day War and the subsequent 50-year Israeli military occupation of the Palestinian territories. Israel won the war in 1967 in six brief days and tripled the size of its territory, but 50 years later the continuing occupation remains unresolved and at a seeming impasse.

On the occasion of this anniversary, it is worth exploring how the resulting Israeli occupation and the deadlock in reaching a political solution have affected Israelis and Palestinians — and where they stand today.

Israel has become a vibrant country with a leading tech industry and one of the most powerful militaries in the world, thanks to the unwavering support of its patron the United States. Its occupation of the Palestinian territories has become entrenched, intensified and normalized, coupled with a slow and steady rightward shift in the political climate. This rightward shift has also seen a weakening of traditional secular Zionism and the growth of religious Messianic Zionism, making it harder to religiously contemplate any withdrawal from the Palestinian territories.

The occupation has come at a price, however. In the aftermath of the war, Jordan's King Hussein (one of only two Arab leaders to sign a formal peace agreement with Israel) made a prescient observation when he declared that "Israel may have peace or territory, but she can never have both."

The past 50 years have clearly shown that Israel has chosen territories over peace. The price of this choice has been that no other Arab or Muslim country has formally made peace with Israel, and Israel's existential need for security and recognition from these countries remains unfulfilled. The eternal Jewish dream of Israel as a safe haven for Jews remains to be realized, largely due to the direct and indirect consequences of its 50-year occupation.

Despite this, according to a survey conducted in Israel in May 2017 by the Israel Democracy Institute, almost 62 percent of Israeli Jews disagreed with the idea that their control over the West Bank amounted to a military occupation. Almost two-thirds of those surveyed considered this control as boosting Israel's security, and half the respondents supported calls by right-wing Israeli politicians to outright annex the Palestinian territories.

Such attitudes were reflected in Israeli Prime Minister Benjamin Netanyahu's statement on June 5, on the eve of the anniversary of the Six-Day War, that regardless of a peace agreement with the Palestinians, Israel would still control the borders (land, sea access and airspace) of any future Palestinian state, in effect rendering it unviable and lacking any real independence or sovereignty, a modern-day Bantustan.

It is not only on the issues of control of future borders that the sides are miles apart. On all the other core issues of the conflict — the status of Jerusalem, Palestinian refugees, the 1967 borders as the basis of a Palestinian state, and Israel's definition as a "Jewish state," the parties are diametrically opposed.

For the Palestinians, with their dreams of independence still unfulfilled 50 years later, the results are a mixed bag. Today, 4.9 million Palestinians live in the occupied territories in conditions akin to being in a giant open-air prison. Two generations of Palestinians now have known nothing but occupation and all the violence and humiliation that are its hallmarks. To these Palestinians, the only Israeli they know is a soldier at a checkpoint, a guard in an Israeli prison or a settler who is living on their land.

Despite these enormous challenges, the last 50 years have witnessed a reenergizing and solidifying of Palestinian identity, both among Palestinians themselves and in the international community at large. After the Arab defeat of 1967, Palestinians took their destiny into their own hands and through a process often tortuous and violent, both against them and by them, have now become a legitimate and recognized nation-state in the making.

Today, 137 of the 193 member nations of the United Nations, including the Vatican, Iceland and Sweden, recognize the "state" of Palestine, and the Palestinian flag flies at U.N. headquarters. Three other major European countries, the United Kingdom, Spain and France have passed non-binding resolutions in their respective legislatures recognizing Palestine.

These are all symbolic and small, yet are critical state-building steps that lay the foundation and strengthen the international legitimacy of a Palestinian state.

Ironically, one of the greatest challenges to a future Palestinian state is internal. While Palestinian identity is firmly established, deep internal political differences cripple the ability to present a united front, as one people, in any future negotiations. Today there are effectively two Palestinian governments, one led by Hamas in Gaza and one led by the Palestinian Authority in the West Bank.

One critical first step is internal political unity. It is imperative for the Palestinians to speak as one voice and with unanimity towards one goal: an end to the Israeli occupation of their lands and the establishment of a sovereign, independent and viable Palestinian state.

Palestinian political parties, whether Hamas or Fatah or a myriad of other smaller ones, should be free to present to the Palestinian people their particular vision of a future state, about the state's borders, its relations with Israel and what kind of Palestinian state it should be. These competing political platforms should be presented to the Palestinian people who can then decide through their votes and elections which vision and party they support. The absolute underlying condition is that these different political views can only be presented through a peaceful political process and not through violence and force of arms.

The second step is in building and supporting the institutions of democracy, such as civic organizations, freedom of the press and opinion, gender and religious equality, and the separation of religion from the machinery of state. These are the building blocks that ensure that the political process and subsequent elections are transparent, competitive, free and fair.

The final step is continuing to build legitimacy and support in the international community and in joining international organizations. It is worth mentioning that the growing worldwide boycott movement against Israeli products is something the Palestinians should support and encourage as long as a clear distinction is made between only boycotting products emanating from Israeli settlements in the occupied territories as opposed to boycotting Israeli products in general, which is punitive and counterproductive.

This distinction is critical in getting worldwide support as well as demonstrating to the many Israelis who truly seek peace that they are not being targeted as a people and nation, rather only the illegal settlements and the goods and services those produce.

The Middle East today is experiencing turmoil unlike at any time in its recent history. Civil war in Syria and Yemen, the rise of the so-called Islamic State and its global terrorism, the violent Sunni-Shiite divide and the regional battle between Saudi Arabia and Iran and their proxies have seemingly pushed the Palestinian issue into the background.

True, these are raging fires demanding immediate attention. But the Palestinian issue remains a slow burn issue that will flare up periodically unless resolved in a just fashion. It is the mother and core of all Arab and Muslim identity causes, and the passage of 50 years has not diminished that one bit.

World | After 50 years, the Palestinian issue is still on a slow burn