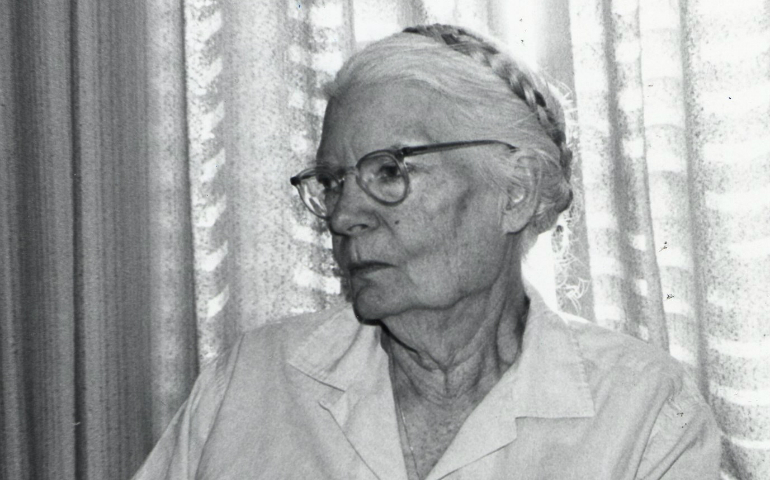 When I first read Dorothy Day in 1987, seven years after the famous writer, activist and co-founder of the Catholic Worker movement had died, I was immediately pulled in. I had moved to Washington, D.C., and was living and working at Mary House, a shelter for pregnant women and their families. As I read about Day's life and work, I was drawn into a long argument her with that has marked my work, my family life and my struggle to be a Christian.

Mary House was founded in 1981 by Bill and Sharon Murphy, who had met while serving at a 1,400-bed shelter, the Community for Creative Non-Violence, in Washington, D.C. They had a vision of a smaller-scale way of ministering to the homeless. They started with their own home, which already held their four children. In the late 1980s, most women who lived there were fleeing violence and poverty in El Salvador, Nicaragua or Guatemala.

At Mary House, I Iearned a balanced approach to serving people who have been marginalized. Because Bill and Sharon knew that they wanted to be doing this work for a long time, they took time to care for their children and themselves. Their version of living simply included some luxuries. After guests would leave, they took time off from hospitality in order to allow their family some space. They sent their children to private schools, occasionally ate at local restaurants and took vacations. Some days Bill declared that the Spirit was calling for some time off, so he took it and encouraged me to do the same.

In contrast, I recall an especially long morning I had spent volunteering at the local Catholic Worker shelter cleaning turkey carcasses on the day after Thanksgiving. Side by side with people who thought nothing of spending hours getting meat for soup from others' trash and who seemed to never take a day off, I began learning about the Catholic Worker movement that Day co-founded with Peter Maurin.

The first thing I remember about the movement is how I disliked it. I found their lack of rules disturbing. How could they let people stay as long as they wanted? Why such a concern with not drawing firm lines between guests and staff? Why wouldn't they apply for non-profit status so they could receive government money and tax-deductible donations? Why was such extreme voluntary poverty necessary to good service? Why were they so obsessed with religion?

But little by little, I was being drawn in.

I started reading a book of Day's essays. Here I encountered her unique vision of hospitality, community and spirituality. I argued with Day, but I kept thinking about her ideas, too. Through accompanying the women at Mary House to their appointments with doctors and social workers, I came in contact with some of the government bureaucracy that Day criticized. I saw the personalism she spoke of not only at the Catholic Worker but at Mary House, where "service" included having long dinners and great parties with guests.

Later (I can't recall precisely when), I found an old copy of Day's autobiography, The Long Loneliness. Day as a person fascinated me. She had been a journalist, a radical, a bohemian. An intellectual and a college-drop out. A single mother who left the man she loved to start the Catholic Worker movement and raise her daughter Tamar in its quirky, loving embrace.

She was a loyal convert to a church she relentlessly challenged. She called the church "the cross on which Christ was crucified" and mourned its distance from the teachings of Jesus in the Sermon on the Mount. She always acknowledged her own sin, which made it easier for her to see the need for a church, for other people of faith (living and dead) to inspire, support and challenge her.

Though I knew plenty of traditional and progressive Catholics, I had never met anyone like Dorothy Day.

I was fascinated and challenged by her piety. She went to daily Mass, prayed with a breviary and a rosary, and could not live without frequent retreats and confession. She spoke casually about the mystical body of Christ and loved the traditional practices that I had never considered relevant to the life of a progressive Catholic.

I was fascinated and challenged by her voracious reading. I began to make a list of the books she had read. Because of her I returned to Dickens, relished the long novels of Tolstoy and Dostoyevsky, and delved into the writings of Merton and the Berrigan brothers.

I was fascinated and challenged by her insistence that it was not enough to support good causes. To be Christian, one had to adopt the precarity of voluntary poverty and "live with [the poor], share with them their suffering too. Giving up one's privacy, and mental and spiritual comforts as well."

I found in her a compelling vision of how to live as a radical, intellectual Catholic, a way to unite the life of the mind with faith in God in the community of saints and sinners that is the church.

From Day's essays and autobiography, I moved on to other books of hers (Loaves and Fishes, On Pilgrimage, her letters and her diaries) and books about her (biographies by William Miller, Jim Forest, Robert Coles, and Paul Elie). I started using excerpts of her books for morning or evening prayer. Though I would put my Dorothy Day books away for a time, I always returned to her when I needed to re-ground myself.

At St. Louis University, I started sharing Day's works in nearly every course I taught (marriage and family, social justice, faith and politics, and Christian ethics). Some students argued with her just as I had. Others were way ahead of where I had been in college and found in her a kindred spirit. Some who joined the movement came to speak in my classes. They always impressed my students and quietly challenged the compromises of my life as a professor.

I spent some time volunteering at the local Catholic Worker, tutoring, cooking meals and taking kids on excursions in St. Louis. I brought my students to the house so they could see what it looks like to build "a new society in the shell of the old," to practice love as "a harsh and dreadful thing." Every time I taught Day, I would be convinced again to question everything about my life. Every time, I would argue back, "There are other ways to authentically practice Christian faith."

When I became a mother, I turned to Day's writing on pregnancy and thought about how she raised her daughter Tamar. I took my children to Karen House, wanting them to love the Catholic Worker vision as I did, though they, like my younger self, were mostly unimpressed. Because of her, I constantly struggled with how much of upper middle class parenting I could embrace (A game system? A neighborhood with excellent schools?) while still calling myself a Christian.

While one of my sons was a college student in New York, I visited Christie Street and Mott Street, in Little Italy, where some of the earliest Catholic Workers opened their doors. I could almost see Day walking the streets, buying vegetables from the market, greeting the men in the soup line, listening to opera with her window open in summertime. A part of me still wished I could follow her.

On a trip to Washington, D.C., I visited the crypt of the National Shrine, the site of Day's famous prayer (recounted in The Long Loneliness) "that some way would open up for me to use what talents I possessed for my fellow workers, for the poor." Day attests that when she arrived home, Peter Maurin was on her doorstep, and that night the Catholic Worker Movement began to be born.

Like Augustine's Confessions, Day's Long Loneliness is a conversion story. Yet I find hers much more compelling. Like Augustine, Day took up celibacy, and her diaries and letters tell us that this was no easy choice, because she never stopped caring for Forester, her first love.

But her struggle was not only to leave behind a life she could no longer call good, but to live in community as if the Gospel were true and possible. In Robert Coles' biography, he tells of taking his students to see Day. They asked how she wanted to be remembered. She spoke first of her life with the poor, of how she tried to serve good coffee and good soup to those who came to the Catholic Worker, but also of learning from those she served. Second, she said she wanted people to say, "She really did love those books!" She found the meaning of her life in trying "to live up to the moral vision of the Church, and of some of my favorite writers."

Even though I have found a certain peace in my much less radical life choices, I confess to being perpetually unsettled by the beauty and hardship of Day's life.

This is what I love about Dorothy Day: her relentless quest for a moral life shaped by a vision of radical discipleship and by novelists whose stories captured what is true and beautiful, and what it costs to be a Christian. Because I started reading her nearly 30 years ago, and keep reading her even now, my quest to live a Christian life is much more difficult, and for that I remain ever in her debt.

[Julie Hanlon Rubio is professor of Christian ethics at St. Louis University focusing on marriage and family ethics. She recently wrote Reading, Praying, Living Pope Francis's The Joy of Love. She is an NCR board member.]