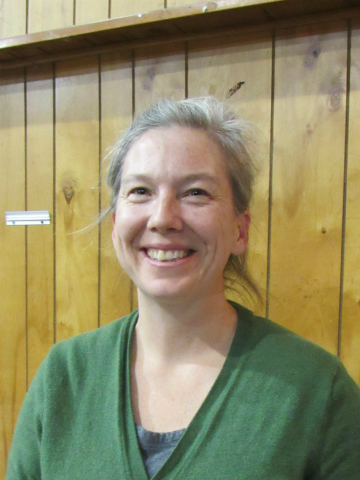 Members of a regional Pax Christi group gathered here Dec. 4 to honor two local peacemakers, but the dominant subtext of the evening was the president-elect and what his administration could mean for an anti-war organization working against racism and harsh treatment of immigrants.

Into the breach spoke Frida Berrigan, who used the words of her late uncle, noted pacifist and anti-war activist Jesuit Fr. Daniel Berrigan: “Know where you stand and stand there.” She said that was his public, polite form of an earthier version used among family that went: “Hope is where your ass is.”

Whatever the version, what he was talking about, she said, was not “the stuff of legend,” not “King of Prussia or Catonsville.” The references were to high profile acts of civil disobedience during which the brothers Berrigan, Daniel and Philip, Frida’s late father, were arrested and for which they received jail sentences. Rather, she told the more than 100 attending the event, hope lies in the “knot of everyday life,” which for her involves organizing neighbors to reclaim public space and collecting clothes and other goods for two refugee families.

Berrigan spoke following a dinner honoring as peacemakers of the year Franciscan Sr. Marie Lucey, director of advocacy and member relations for the Franciscan Action Network, and Franciscan Fr. Jacek Orzechowski, a priest ministering at St. Camillus Parish, where the event was held. Orzechowski is well known in the Washington region for his advocacy across a range of social justice issues. The event was sponsored by Pax Christi Metro DC. Among those attending was Sr. Patricia Chappell, a member of the Sisters of Notre Dame de Namur and executive director of Pax Christi USA.

Berrigan, the author of It Runs in the Family: On Being Raised by Radicals and Growing into Rebellious Motherhood, said that when Donald Trump was elected, the network she belongs to that aids the refugee families and “was already a little maxed out with the families that we have, said, ‘We can take four more families.’ And we’re hoping to establish them before the 21st of January,” the day Trump takes office, promising to severely restrict immigration and to deport undocumented immigrants.

The “other bit of modest work” she is doing involves a nearby abandoned lot and, eventually, wild flowers. The lot was once a basketball court that was the scene of fights “and other business” in the town of New London, Conn., where she lives with her husband and three children. The city got tired of the problems on the playground and decided to take down the hoops.

Berrigan and others surveyed the neighborhood, going door to door “to get people’s opinions of what to do.” In the end, 120 of the surveys were returned containing all sorts of ideas — bring back the basketball court, build small houses, turn it into a vegetable garden, build a tree house, plant a blueberry patch.

A meeting was called. The organizers were hoping for 10 people, between 30 and 40 showed up, and there was robust discussion and debate. It looks as if the final product might include a combination of basketball court and garden space, with work for young people to take ownership of the project.

“So this work is moving forward, right? No matter who is in the White House. There will be blueberries and swiss chard at McDonald St. And Connecticut Avenue. That is a fact. That is going to happen. And wild flowers.”

She said “it isn’t just hokum to say we need each other. In the face of everything we face right now, it doesn’t sound like much. But it is the place to begin. We need each other and we need good work.”

The night of the meeting, she said she watched people come down the steps into the church hall “and they were tired and stressed. And they left with tasks and next steps and friends.”

In her work, Lucey focuses on gun violence prevention and relationships with Muslims as well as on human rights, including immigration issues, human trafficking and refugees. From 2003 to 2011, she was associate director for social mission with the Leadership Conference of Women Religions. She has served her community, the Sisters of St. Francis of Philadelphia, as president as well as director of corporate social responsibility and justice and peace coordinator. She has participated in delegations to Nicaragua, El Salvador, Mexico, Syria and Lebanon.

Orzechowski is a friar of Holy Name Province and a Franciscan Action Network board member. He has led eight Living Stones pilgrimages for the Holy Land Christian Ecumenical foundation and is a tireless advocate for justice, peace and reconciliation in Palestine. He has led numerous efforts in Maryland advocating for immigrants and on environmental issues. The Catholic bishops of Mexico passed a strong statement on forest policy after reading the Franciscan declaration on forest conservation that he authored.