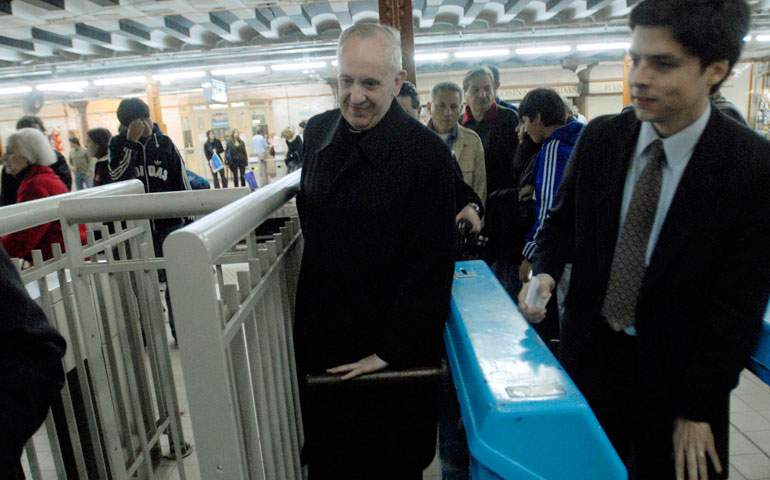 Well into Paul Vallely's absorbing portrait of the show-stopping new pope, we see Jorge Bergoglio as archbishop of Buenos Aires, Argentina, presumably offering Communion to any and all takers in his born-again mission to the city's poorest neighborhoods.

"When you're working in a shanty town 90 percent of your congregation are single or divorced," says Fr. Augosto Zampini, a diocesan priest who serves as one of Vallely's key sources. "You have to learn to deal with that. Communion for the divorced and remarried is not an issue there. Everyone takes Communion."

Vallely doesn't explicitly place Zampini at the scene -- nor is it clear how well he knew the archbishop -- but the implication is clear. Faced with a choice of inviting the few or the many to partake, Bergoglio allowed pastoral needs to trump church rules.

The scene frames the dilemma and debate that surrounds Pope Francis. Vallely's account bolsters the debated narrative of a cautious company man who became a fierce advocate of mercy and simplicity on the strength of a powerful, enigmatic conversion. In the few months since his election to the papacy, the eagerness to size him up has centered largely on attempts to grasp the nature and implications of that version.

Vallely, a British journalist, trusts the growing, initial consensus that at the very least "something did happen" that propelled Bergoglio in a new direction, but he can't nail it down. Perhaps with more time than he was permitted in producing a hasty biography, he might have done so. Given the restraints, he has still provided a responsible first look that is both commendable and often elegantly written. He admires Francis with nary a qualm, and trusts the popular account of his redemption, but doesn't omit his failings or evade the testimony of detractors.

Vallely lacked familiarity with Bergoglio before receiving his challenge to lead the pack of biographers of Pope Benedict XVI's successor, he recently told a Reuters reporter. Without access to Francis himself, Vallely combed archives in Rome and in Argentina and relies largely on secondary or tertiary sources to piece together a life that has been relatively hidden in some key respects. What the author cannot verify, such as the authenticity of the conversion, he fills in with abundant speculation, which varies from possible to highly unlikely.

The crux of the matter is the subject of conversion -- its depth and meaning for Bergoglio. He readily confesses that he is a changed man who acted out of youthful brashness and a wrong-headed concept of his vocation. He admitted to being something of a tyrant and a tunnel-vision Jesuit novice master and provincial in Argentina. He had indeed undergone a kind of Damascus Road turnaround, causing him to recast his role as a consummate establishment insider to a missioner of apostleship and outreach, especially to the poor and those in need beyond the church walls. What pope in modern memory has arrived bemoaning his actual record as a cleric who needed a spiritual jolt to discover that his original sense of "vocation" hadn't been his real vocation at all? Here was a conclave candidate with a self-admittedly tarnished résumé.

Vallely only partially explains the implications of Bergoglio's dramatic turn. Having trashed liberation theology, Bergoglio now says he had been wrong. He admits to errors in responding to the brutality of the "Dirty War" repression. His actions as a leader had reflected a mistaken, insular, self-serving attitude. Now he has become the foe of clerical privilege, legality and the temptation for the church to practice idolatry toward itself. Bergoglio's renewed priesthood was closer to his heart than his head. He became a messenger of mercy to those on the margins, making the slums his second home.

How well does this portrait hold up? Vallely offers reasons to believe it might, but falls far short of submitting enough evidence to prove much at this point. The missing elements become both vexing and intriguing. They revolve around the question of what the conversion has led to.

Does his allegedly dispensing Communion to "irregulars" (the divorced and remarried without annulment) mark him as a merciful priest whose heart overrules his canonical head as a rule or only on special occasions? Is he, in other words, a follower of the classic Roman law that set standards impossibly high and allowed myriad exceptions? Or a liberal interpreter of conscience's primacy and scope to allow that option everywhere at all times? Rewriting the behavioral guidelines or permitting only the rarest departures? Creating a new norm, more leeway within the current norm, or no formal change whatever?

Does conversion translate into a reverse of fundamental practices, as progressives call for? Does it challenge Catholic moral judgments on divorced people, gays, lesbians, and contraceptive users, or does it stop at personal, pastoral moments of discretion? Is it a reformist review of moral doctrine or some suggestive trimming around the edges?

More profoundly, perhaps, did Bergoglio's conversion imbue him with a passion for social justice such as he once rejected in liberation theology? To what extent does his desire to improve economic, social and political conditions for the poor match his obvious concern to meet their pastoral needs for friendship, spiritual sustenance and solidarity with the church?

Bergoglio the gifted, sacrificial pastor is prominent in Vallely's book, but there is virtually no evidence or examples that he has either the taste for confronting power for the sake of social justice or placing the church at risk in fighting for greater social equality and material well-being. His instrument for attacking social ills has been as the spokesman for the Argentine church. In that capacity, he has denounced economic and political exploiters in the language of Catholic social teaching. By inference, Bergoglio's compelling words set the tone and prepare groundwork for activists to press practical strategies.

On internal church doctrine, Vallely presents him as attempting to curb himself of his old authoritarian ways by embracing a Vatican II model of consultation and collegiality, with a preference for affirming "decided" teaching on the hot-button issues while signaling tolerance for a degree of priestly discretion.

Vallely details the baggage Bergoglio brought with him from his first decades. A personable man dedicated to prayer and learning, he also became a painfully divisive figure, particularly over his treatment of two Jesuits who refused his order to leave the slums and were allegedly then left vulnerable to persecution by the regime. He is credited for rescuing other Catholics from persecution but drew criticism for not openly protesting abuses.

The circumstances of the now nearly legendary conversion remain shrouded. After finishing a tough term as Jesuit provincial, Bergoglio moved to a distant city where it's believed he looked deeply within with the help of Ignatius of Loyola's Spiritual Exercises. What brought him to that? Without a clear answer, it seems likely that his willingness to wrestle with guilt triggered the introspective meditation.

Like any other, Bergoglio's life story embodies its share of ambiguities, and Vallely invokes the image of "untying the knots" to explain his goal. What makes Francis an intriguing feature is not his complexity, but that, at age 77, he remains a work in progress largely because of his stumbles, not in spite of them. He may still be discovering what the "something happened" means to him. Vallely indicates that the pope of surprises had been rehearsing for many years in Argentina.

Francis' stirring of the waters suggests to some reformists that a redefinition of contentious moral teachings is in the works, either by his own authority or after thorough collaboration. Vallely ventures no guesses, but his analysis implies that moves toward women's ordination, organized activism for social justice, or approval of same-sex relations would be incremental at best.

In his brief time, Francis has upheld the existing teachings at every point. In the wake of Vallely's depiction of Bergoglio's open invitation to receive the consecrated host, the Vatican last month bluntly reminded divorced and remarried Catholics that they are strictly forbidden from receiving Communion.

[Ken Briggs reported on religion for Newsday and The New York Times, has contributed articles to many publications, has written four books and is an instructor at Lafayette College in Easton, Pa. He blogs for NCR Today.]

A version of this story appeared in the Nov 22-Dec 5, 2013 print issue under the headline: Author makes case for Bergoglio's conversion.