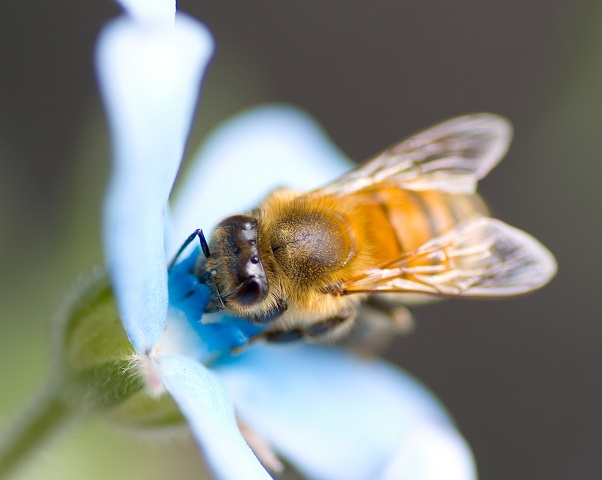 The 2011, the revised English translation of the Roman Missal restored the mention of bees found in the original Latin version of the Exsultet: The Proclamation of Easter. I have no inside information to offer as to why the bees were ever left out of the previous translation. But their return enriches the sensual experience of the Easter Vigil because it engages the imagination and invites us to contemplate God's creation in the Easter mystery.

Perhaps it is because there is such a crisis in the United States and other countries over bee "colony collapse disorder," in which honeybees, so important to agriculture, are dying, that the mention of bees caught my attention. Monoculture, that is, the lack of agricultural diversity across vast acreage, and pesticides are just two suspected causes.

It is interesting that, coinciding with the awareness of the honeybee crisis on the part of scientists, farmers, artists and filmmakers, bees are once again present in the English translation of the Exsultet.

I think about the bees and liturgy every time Holy Saturday draws near; I've fallen in love with the Exsultet.

Then, at this year's Los Angeles Religious Education Conference, there was a candle and honey exhibit that included a honey frame with live bees and a banner that read: "The bees are back!" It was the nudge I needed finally to write something about Easter bees, and I started with the Bible.

Honey is often mentioned for its quality of sweetness and once, in Proverbs 24:13, for its medicinal properties. Honey was considered a delicacy and a sign of blessing, abundance and prosperity. In the Old Testament, the Promised Land is called a "land flowing with milk and honey" at least 20 times.

Honey, as in curds and honey, was also a call to repentance for Israel because if the people didn't change, this is all they would have from the produce of their land. In Proverbs 24:13, a father tells his son to eat honey, for the drippings of the honeycomb are sweet, but then the father warns his son (25:27), "It is not good to eat too much honey, nor is it glorious to seek one's own glory."

Wax, which fuels the light that reminds us of domesticity, warmth and comfort, is mentioned just four times in the Scriptures.

Light, one of the most elemental and powerful images in the Bible, is mentioned about 236 times: 146 in the Old Testament and 90 times in the New Testament. Light, like honey, is often a symbol of blessing and goodness.

And on this Easter vigil, the church's liturgy rejoices through the Easter Proclamation because "the night that with a pillar of fire banished the darkness of sin."

This hymn of ultimate praise twice blesses the bees, "mother bees" whose lighted wax in the form of a candle brings light to the darkness:

On this, your night of grace, O holy Father,
accept this candle, a solemn offering,
the work of bees and of your servants' hands,
an evening sacrifice of praise,
this gift from your most holy Church.

But now we know the praises of this pillar,
which glowing fire ignites for God's honor,
a fire into many flames divided,
yet never dimmed by sharing of its light,
for it is fed by melting wax,
drawn out by mother bees
to build a torch so precious.

Every person who participates in the Easter Vigil this year will once again have the opportunity to contemplate the role of these delicate but hard-working creatures in our lives. Psalm 81:16 presages the Eucharist as well: "But you would be fed with the finest of wheat; with honey from the rock I would satisfy you."

In 2012, Pope Benedict XVI compared bees and the community of believers in his Easter Vigil homily:

The great hymn of the Exsultet, which the deacon sings at the beginning of the Easter liturgy, points us quite gently towards a further aspect. It reminds us that this object, the candle, has its origin in the work of bees. So the whole of creation plays its part. In the candle, creation becomes a bearer of light. But in the mind of the Fathers, the candle also in some sense contains a silent reference to the Church. The cooperation of the living community of believers in the Church in some way resembles the activity of bees. It builds up the community of light. So the candle serves as a summons to us to become involved in the community of the Church, whose raison d'être is to let the light of Christ shine upon the world.

I love the Exsultet.