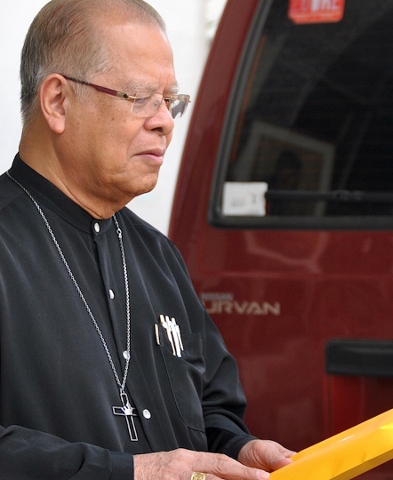 Archbishop Fernando Capalla of Davao attended the Catholic Bishops’ Conference of the Philippines plenary assembly in Manila in 2012. (N.J. Viehland)

Retired Archbishop Fernando Capalla, who once headed the Catholic Bishops’ Conference of the Philippines (CBCP), condemned the killing of his brother Romeo Capalla, an ex-rebel, and demanded the investigation of this and other killings being blamed on government forces.

On Sunday Capalla used the occasion of his brother’s funeral Mass to condemn the “heinous and unconscionable” crime. He was preaching in Leon, Iloilo, province where the Cappallas are from, some 280 miles southeast of Manila.

The retired archbishop of Davao, southern Philippines, demanded “justice for my brother, Romy, and for many other victims like him.” His brother had been unarmed when he was attacked, the bishop noted.

Hundreds of leftist activists, journalists, environmentalists and clergy have been killed by alleged members of the security forces since 2001. Human rights organizations in the country reported that from the start of President Benigno Aquino’s term in 2010 to late 2013 alone, they recorded around 114 cases of extrajudicial killings.

Romeo Capalla, 65, was shot in the head in front of the public market of Oton, Iloilo, on March 15 as he helped his mother-in-law get into his vehicle.

He was a former rebel with the Communist New People’s Army. In 2005, he was arrested on what he claimed to be trumped up charges of arson, which the court eventually dismissed.

When he was killed, he was directing the Panay Fair Trade Center (PFTC), which helps small farmers and sugar traders. He was also a member of the association of ex-detainees who fought against the unlawful detention and arrest of people.

The Communist Party of the Philippines in the region blames government forces for his killing. In a statement posted on its website it noted that two PFTC sugar mills in Janiuay Town were burned simultaneously with Romeo Capalla’s shooting.

Army Third Infantry Division spokesperson Maj. Ray Tiongson in a statement to media, however, called the allegations against the military “preposterous.” He said soldiers in his division based near Iloilo “strictly adhere to the provisions of International Humanitarian Law.”

He cited the division’s “zero record” of human rights violations with the government’s Commission on Human Rights in the past year. He said the Armed Forces will cooperate with any investigation on the incident.

Fr. Eduardo Gariguez, executive secretary of CBCP's National Secretariat for Social Action, Justice and Peace also called for a probe citing the number of similar killings in the country.

Other international groups have also challenged the Philippine government to form a fact-finding body to probe Capalla’s case. Among groups that have demanded a probe are the Toronto, Canada-based International Coalition on Human Rights in the Philippines, the World Free Trade Organization in the Netherlands, the association of fair trade organizations in Italy (Agices) and fair trade organizations based in Hong Kong and Seoul, South Korea.