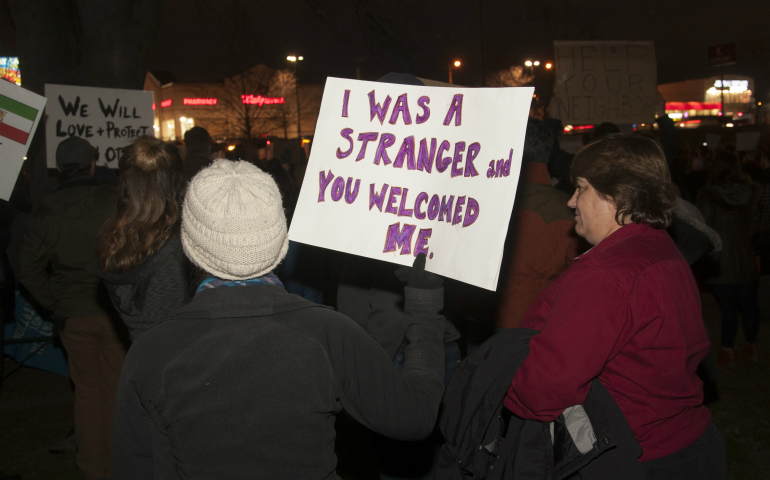 What can Catholic parishes learn from evangelical megachurches? The answer is both in the big and the small, says one Catholic megachurch visitor.

A pastor is dismissed from his post in the Archdiocese of San Antonio. He was a leader of an Anglican community which sought communion with the Catholic church, and it seems like the archbishop is questioning the priest's commitment to the archdiocese.

Parishes in the Charlotte diocese are sponsoring refugees among those who were turned away by President Trump's Muslim ban order affecting seven countries. Bishop Peter Jugis of Charlotte expresses opposition to the Trump order.

A preservation group from St. Adalbert's Parish in Chicago's Pilsen neighborhood says there is a way to preserve their 100-year-old Polish church, which now also offers Mass in Spanish.

The Alpha program is being promoted in the San Francisco archdiocese as an evangelization approach. Alpha began in Episcopal churches and takes its impetus from exploring basic questions about Christianity. It has proven effective in reaching seeking young adults, who eschew denominational labels but have an innate curiosity about Christian spirituality. Some question whether Alpha is sufficiently Catholic.

The only Catholic church dedicated to African American Catholics in Nebraska is renovated.

A Phoenix parish gets ready for the Encuentro for Latino Catholics.

William Simon's book on what makes a great parish is critiqued in Commonweal. There is ultimately a limitation to the parish-as-business model, says the reviewer.

A University of California-Berkeley student reflects on her Catholic life and how the campus parish there has created a community where she can continue to question.

Another spiritual memoir-type piece: a convert from the evangelical world to Catholicism describes what bugs him about parish life. In short, Catholics need to put a bit more effort into singing and praying (no more running to the exits after the Eucharist!).