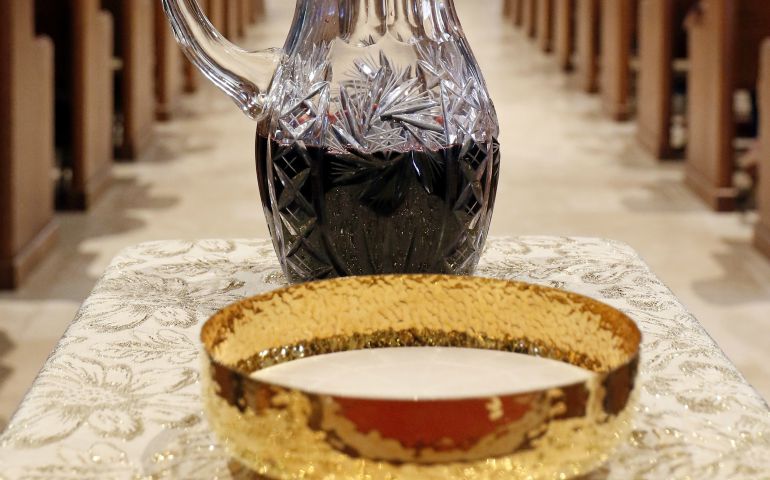 A ciborium containing hosts and a flagon of wine are seen during Mass April 23 at St. Therese of Lisieux Church in Montauk, New York. (CNS/Gregory A. Shemitz, Long Island Catholic)

Religion News Service takes a look at a couple of interesting issues that have surfaced recently. The first has Pope Francis proclaiming a fourth route to sainthood. Giving one's life for someone else, even if it is not in defense of Christianity can now lead to sainthood. The example given is that of Maximilian Kolbe, a Polish priest, who at Auschwitz offered to take the place of a fellow prisoner sentenced to die of starvation. Kolbe was then executed by lethal injection.

Kolbe was canonized without this additional path to sainthood, so one wonders how significant this change really is. For me, the significance is that so much of what the Catholic Church understands about sainthood and holiness revolves around being a good Catholic. I think this fourth road to sainthood puts greater emphasis on the importance of being a good person. Catholicism does not hold a monopoly on goodness. There are good people in every religion and in every walk of life. Good actions are not only related to the practice of Catholicism, and these actions continue to be good even if they are done by someone who is not Catholic.

I think this small modification in the road to sainthood recognizes that reality. Perhaps the next step would be to canonize exemplary non-Catholics such as Mahatma Gandhi or Nelson Mandela.

The second issue relates to the use of gluten-free communion wafers in the church. It seems that Protestant churches are moving to provide gluten-free Communion at the same time the Catholic Church has restated its decision that, while low-gluten wafers are acceptable, gluten-free wafers constitute "invalid matter" for the Eucharist.

Lauren Markoe sees the difference as a theological one. Because Catholics believe in transubstantiation, they want to stick as closely as possible to the first eucharistic celebration. Protestants see the Eucharist as more symbolic and thus are somewhat looser on what the elements must be.

It is noted on a Methodist website as follows: "Surely we do not intend to exclude people with celiac disease or gluten intolerance from receiving both the bread and the cup."

A Lutheran website states: "Since the scriptures are silent on the source of the bread, it may be baked from the flour of wheat, rye, barley, or other grains."

It is true that drinking from the cup alone provides the recipient with the whole Christ, just as Catholics for years received only the communion wafer. It is also true that most gluten allergy sufferers may be fine with the low-gluten hosts. Yet, those with celiac disease and those who may be daily communicants could well be at risk.

While not a major issue it once again puts the Catholic Church on the side of liturgical norms and practices — and not on the side of the pastoral needs of its people. Perhaps the low-gluten hosts solve much of the problem, but how hard is it to say that some of these people need an accommodation and we should provide it for them?

It is difficult to know which direction the church will take in the future. Francis seems to recognize that the church is not an island but lives and operates in a larger world and a larger context. We need to recognize what is good about the world in which we live. We need to learn from those around us as well as those who make up our own insular community.

While neither issue discussed here is of major importance, it reflects on how the church approaches issues that come before it. Francis seems to be focusing on people and their needs, as the center of church decision making. Others seem to still be focused on a body of rules that are seen as more determinative of practice than they need to be.

Our church needs to become more pastoral. It also needs bishops who don't believe that the entire deposit of faith has been contaminated anytime the church makes a pastoral decision. For example, giving Communion to a faithful divorced Catholic who has suffered in silence for years does not undermine the entire teaching of the church on divorce.