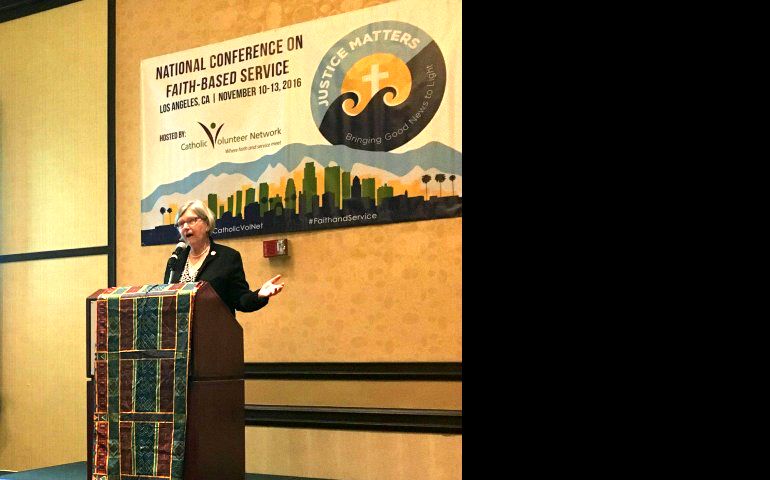 The conference opened Nov. 10, just two days after the divisive 2016 presidential election ended. The election results were an impossible topic to avoid, still too fresh for many to have fully processed. Shock was still evident on many faces, and it was the main topic of the chatter during the breaks.

The conference unintentionally became a safe space for processing and healing. While best practices for campus recruitment were still discussed, the election results played a part in nearly every aspect of the four-day conference. Some presenters directly broached the subject while others allowed participants to read between the lines.

Thursday night opened with Social Service Sr. Simone Campbell, the executive director of NETWORK. She had been slated to talk about "Stepping into the Light: Public Engagement for Immigration Reform." However, Campbell told the crowd that they'd be hearing an entirely different talk than what she had originally planned. Instead of her talk on "Stepping into the Light," Campbell said this new talk could conversely be titled "Sitting in the Dark."

Campbell spoke of her understanding of the election from her time spent on Nuns on the Bus, a tour that took Campbell and other sisters to both the Republican and Democratic National Conventions.

"We need to come from a different space; we need to spend time on a regular basis trying to open ourselves to the differences that exist in our nation. ... No one feels heard," she said.

For the conference participants struggling with the feelings left by the election and how to proceed, Campbell offered six concrete ideas for action.

She first proposed that bold storytelling, and not scolding, was "where change begins to happen." Next, was that people, especially those who are undocumented, need to be aware of their rights through education. After educating the people, the new federal administration and congress need to be educated about immigrants in a way that appeals to the new administration.

In addition to education and storytelling, Campbell acknowledged that people have to prepare for legal action. A lawyer herself, she asked for people to support lawyers and organizations that would prepare to protect executive orders like the Deferred Action for Childhood Arrivals (DACA).

Only towards the end did she talk about confrontation and said that this action was not meant for every person. She said that people, organizations and volunteer groups need to discern if they are "called to confront these issues" and to not "rule [the possibility] out."

The final course of action Campbell suggested was to help "our nation deal with our Achilles' heel of dealing with security." "The Gospel calls us to be insecure," which goes against the individualism that is often synonymous with society today, Campbell said.

Campbell then fielded comments and questions from the conference attendees. While some asked questions, many used the time as a way to vent their frustrations. One attendee asked "Where were our [Catholic] leaders?"

Campbell also briefly spoke about the need to identify and dismantle white privilege saying "it's going to be hard, but we've got to do it. It's the only way we're going to build community."

Rev. Rebecca Stelle, one of the leaders of Christ of Church, Right Now in Washington, D.C., devoted her Saturday keynote speech wholly to this subject.

Addressing the crowd, Stelle said, "what has been most urgent to me since Tuesday is that we need to stop calling people racist and start looking at our own hearts."

A panel of scholars spoke to the crowd of the importance of interfaith discussions. The panel members are part of a semester-long exploration "of the impact of religions on world events" sponsored by the University of Southern California Caruso Catholic Center and the Institute for Advanced Catholic Studies.

Rabbi Reuven Firestone, Amir Hussain and Pim Valkenberg only briefly spoke about the election results itself. An especially poignant moment came when Firestone, overcome with emotion, said, "If it turns out that Muslims are registered … I don't think it will ever work. It reminds people like me about what happened to my parents."

Closing out the conference was Susan Burton, founder and executive director of A New Way of Life: Reentry Project, a nonprofit in South Central Los Angeles for women coming out of incarceration.

Burton told her own story of addiction and incarceration after her five-year-old son died. Burton talked about finding hope and healing after starting A New Way of Life telling the attendees "I strive to stay out of the way and useful [to the God of my understanding]."

"As we are on the ground, doing this work ... it's just going to make the victory really sweet," said Burton. She encouraged the volunteer organizations at the retreat to be steadfast with their work, despite the election results.

"I think all things are possible," she added. "... Maybe somewhere up in here there's going to be good stuff."

By the end of the conference, many attendees remarked that the event became self-care from the news and the nation.

One attendee told a small group that the conference showed that we need to "pray and work and see what we can do" — perhaps a more accurate theme than the original.

Amid protests in Colombia, Catholics emphasize they're on the side of the poor

John Paul I and the pill: He wanted change, but accepted 'Humanae Vitae'