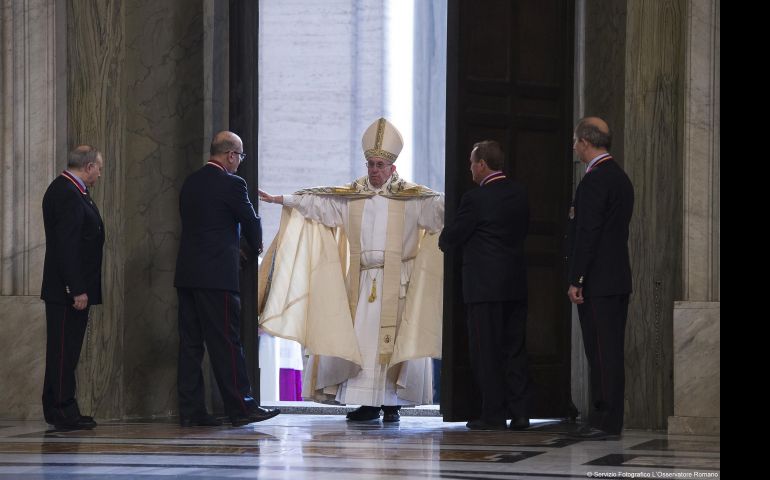 Pope Francis begins Sunday his fourth year as leader of the global Roman Catholic church. NCR wanted to mark the occasion by dipping into the some 2,500 stories we published mentioning the Argentine pontiff in 2015 and early 2016. Below are links to many of our reports accompanying the pope around the globe in the past year, followed by some of the most striking statements of his travels. 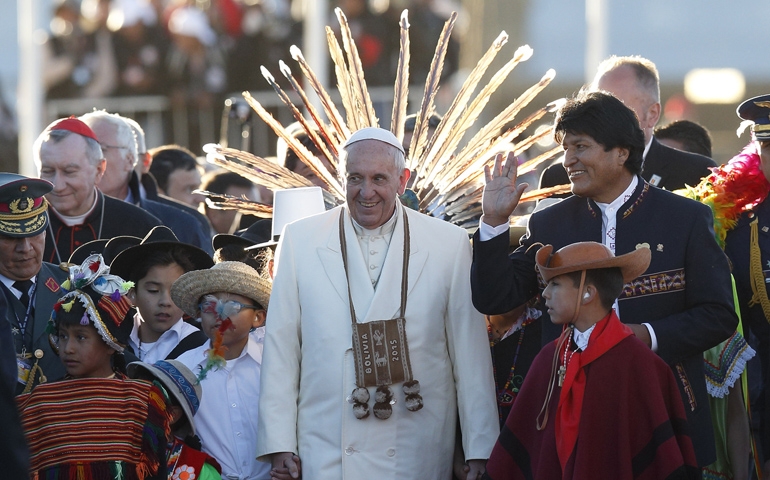 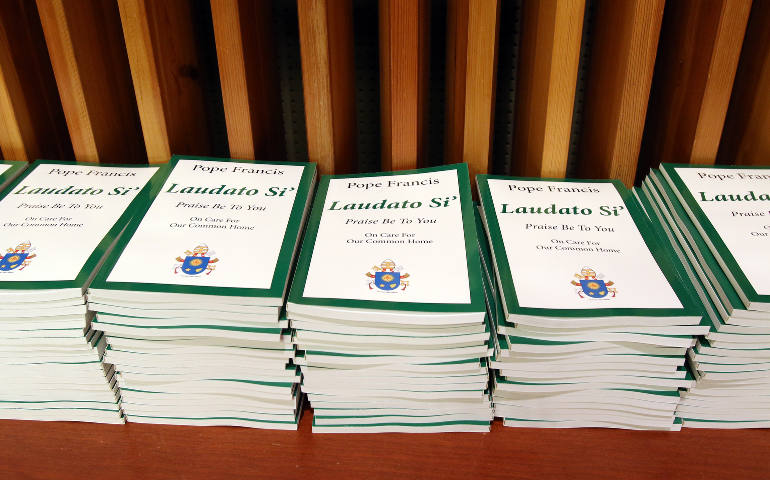 Copies of Pope Francis' encyclical on the environment, "Laudato Si', on Care for Our Common Home," are stacked on a table prior to a presentation on the encyclical June 30 at U.N. headquarters in New York City.(CNS/Gregory A. Shemitz) 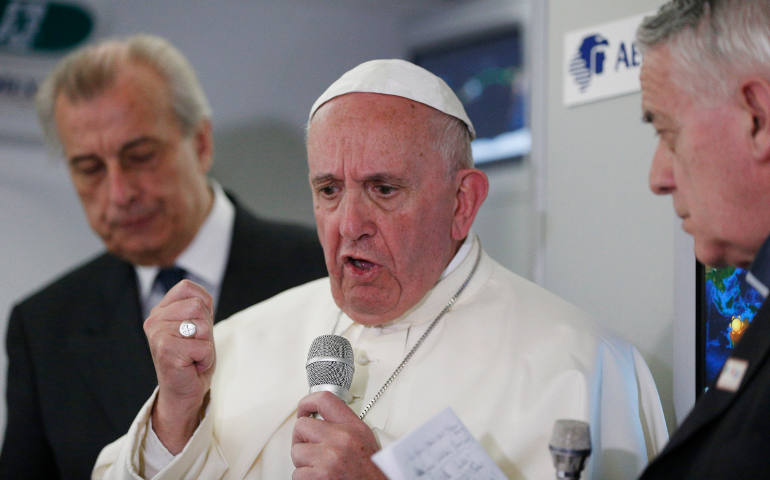 Synod of Bishops on the family 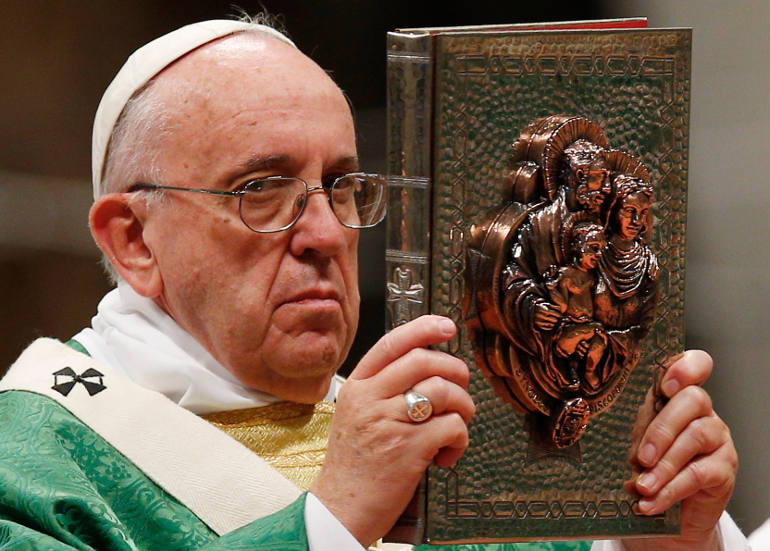 Pope Francis raises the Book of the Gospels during the opening Mass of the Synod of Bishops on the family in St. Peter's Basilica at the Vatican Oct. 4. The cover of the book is decorated with an image of the Holy Family. (CNS/Paul Haring) 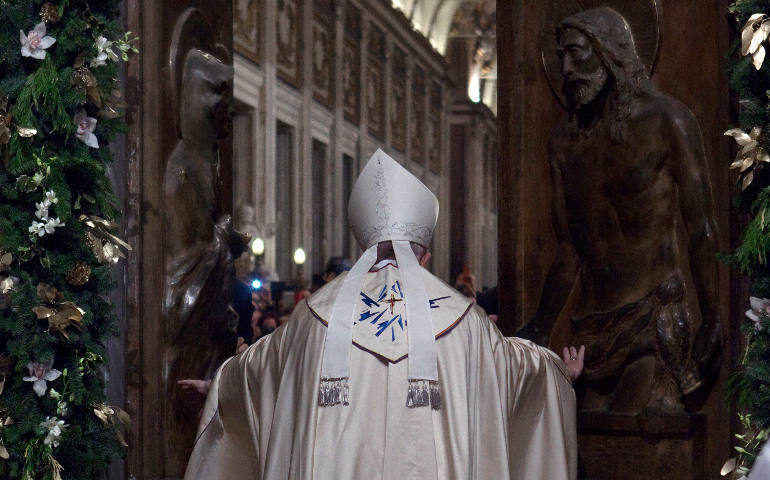 “Nowadays the death penalty is inadmissible, no matter how serious the crime committed. It is an offence against the inviolability of life and the dignity of the human person, which contradicts God's plan for man and society, and his merciful justice, and impedes the penalty from fulfilling any just objective. It does not render justice to the victims, but rather fosters vengeance.” Audience with the International Commission against the Death Penalty, March 20, 2015

"What to do, a young person without work? What future do they have? What path of life to choose? This is a responsibility not only of the city, not only of the country, but of the world. Because -- because there is an economic system that throws away people and now touches the young people, namely, without work. … The problem is not [about] eating, The most grave problem is not to have the possibility to bring bread home, to earn it. And when you do not earn bread, you lose dignity, and this lacking of work robs us of dignity! We must defend our dignity, as citizens, as men, as women, as young people! This is grave!" Visit to Naples, Italy, March 21, 2015

“I urgently appeal, then, for a new dialogue about how we are shaping the future of our planet. We need a conversation which includes everyone, since the environmental challenge we are undergoing, and its human roots, concern and affect us all.” “Laudato Si’, on Care for Our Common Home” June 18, 2015 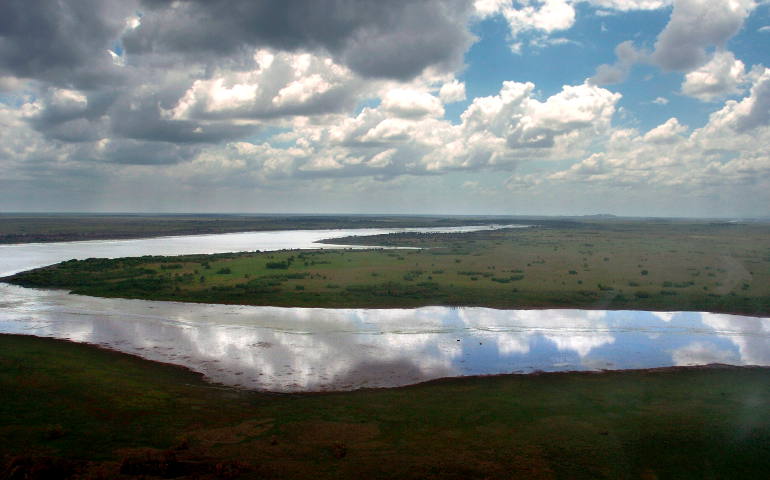 “The earth, our home, is beginning to look more and more like an immense pile of filth. In many parts of the planet, the elderly lament that once beautiful landscapes are now covered with rubbish.” “Laudato Si’, on Care for Our Common Home” June 18, 2015

"Humanity is called to recognize the need for changes of lifestyle, production and consumption, in order to combat this warming or at least the human causes which produce or aggravate it. It is true that there are other factors (such as volcanic activity, variations in the earth's orbit and axis, the solar cycle), yet a number of scientific studies indicate that most global warming in recent decades is due to the great concentration of greenhouse gases ... released mainly as a result of human activity." “Laudato Si’, on Care for Our Common Home” June 18, 2015

"We know that technology based on the use of highly polluting fossil fuels – especially coal, but also oil and, to a lesser degree, gas – needs to be progressively replaced without delay. Until greater progress is made in developing widely accessible sources of renewable energy, it is legitimate to choose the lesser of two evils or to find short-term solutions.”  “Laudato Si’, on Care for Our Common Home” June 18, 2015

"I say this to you with regret: Many grave sins were committed against the native peoples of America in the name of God. Here I wish to be quite clear, as was St. John Paul II: I humbly ask forgiveness, not only for the offenses of the church herself, but also for crimes committed against the native peoples during the so-called conquest of America." Address to World Meeting of Popular Movements, Santa Cruz, Bolivia, July 9, 2015

“In conclusion, I would like to repeat: the future of humanity does not lie solely in the hands of great leaders, the great powers and the elites. It is fundamentally in the hands of peoples and in their ability to organize. It is in their hands, which can guide with humility and conviction this process of change. I am with you. Let us together say from the heart: no family without lodging, no rural worker without land, no laborer without rights, no people without sovereignty, no individual without dignity, no child without childhood, no young person without a future, no elderly person without a venerable old age. Keep up your struggle and, please, take great care of Mother Earth.” Address to World Meeting of Popular Movements, Santa Cruz, Bolivia, July 9, 2015

“I am deeply grateful for your welcome in the name of all Americans. As the son of an immigrant family, I am happy to be a guest in this country, which was largely built by such families. I look forward to these days of encounter and dialogue, in which I hope to listen to, and share, many of the hopes and dreams of the American people.” Speech on the South Lawn at the White House, Sept. 23, 2015 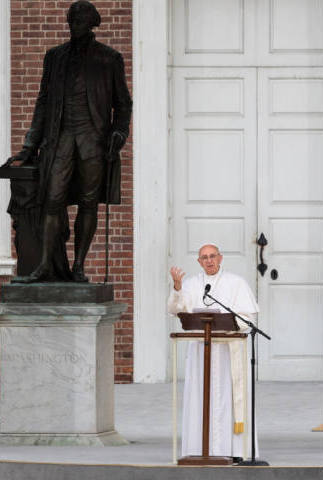 Pope Francis delivers an address at Independence Mall in Philadelphia Sept. 26. He spoke near a statue of George Washington to an estimated crowd of 50,000 people. (CNS photo/Lisa Johnston, St. Louis Review)

“I know that you face many challenges, and that the field in which you sow is unyielding and that there is always the temptation to give in to fear, to lick one’s wounds, to think back on bygone times and to devise harsh responses to fierce opposition. And yet we are promoters of the culture of encounter. We are living sacraments of the embrace between God’s riches and our poverty. We are witnesses of the abasement and the condescension of God who anticipates in love our every response. Dialogue is our method, not as a shrewd strategy but out of fidelity to the One who never wearies of visiting the marketplace, even at the eleventh hour, to propose his offer of love (Mt 20:1-16). The path ahead, then, is dialogue among yourselves, dialogue in your presbyterates, dialogue with lay persons, dialogue with families, dialogue with society. I cannot ever tire of encouraging you to dialogue fearlessly. The richer the heritage which you are called to share with parrhesia, the more eloquent should be the humility with which you should offer it. Do not be afraid to set out on that “exodus” which is necessary for all authentic dialogue. Otherwise, we fail to understand the thinking of others, or to realize deep down that the brother or sister we wish to reach and redeem, with the power and the closeness of love, counts more than their positions, distant as they may be from what we hold as true and certain. Harsh and divisive language does not befit the tongue of a pastor, it has no place in his heart; although it may momentarily seem to win the day, only the enduring allure of goodness and love remains truly convincing.” Speech to the United States bishops, Sept. 23, 2015

“Let us remember the Golden Rule: “Do unto others as you would have them do unto you” (Mt 7:12). This Rule points us in a clear direction. Let us treat others with the same passion and compassion with which we want to be treated. Let us seek for others the same possibilities which we seek for ourselves. Let us help others to grow, as we would like to be helped ourselves. In a word, if we want security, let us give security; if we want life, let us give life; if we want opportunities, let us provide opportunities. The yardstick we use for others will be the yardstick which time will use for us. The Golden Rule also reminds us of our responsibility to protect and defend human life at every stage of its development.”  Speech to United States Congress, Sept. 24, 2015

“I am deeply pained by the stories, the sufferings and the pain of minors who were sexually abused by priests. I continue to be ashamed that persons charged with the tender care of those little ones abused them and caused them grave harm. I deeply regret this. God weeps. The crimes and sins of sexual abuse of minors may no longer be kept secret; I commit myself to ensuring that the Church makes every effort to protect minors and I promise that those responsible will be held to account. Survivors of abuse have become true heralds of hope and ministers of mercy; humbly we owe our gratitude to each of them and to their families for their great courage in shedding the light of Christ on the evil sexual abuse of minors.” Speech to bishops at World Meeting of Families at St. Charles Borromeo Seminary in Philadelphia, Sept. 27, 2015

"It is not ... with the club of judgment that we will bring back the lost sheep to the fold, but with the holiness of life that is the principle of renewal and reform in the church." Audience with 'Missionaries of Mercy', Feb. 9, 2016

Bishop McElroy: US and Vatican can work together on vaccine distribution

EarthBeat Weekly: How to shrink our pandemic-fueled digital environmental footprints

Care of people and the Earth is one