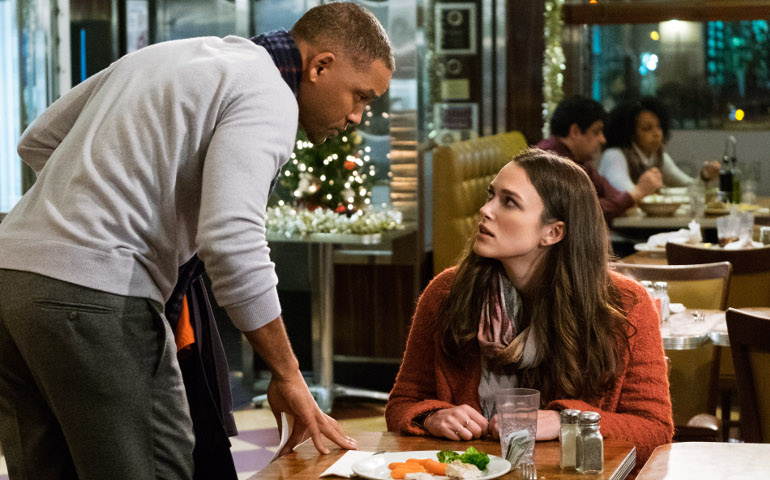 Will Smith and Keira Knightley star in a scene from the movie "Collateral Beauty." (CNS / Warner Bros.)

At a high-powered advertising agency, Howard (Will Smith) is pumping enthusiasm at an employee meeting. He tells them that love, time and death are the foundation of all successful advertising because these ideas connect everyone. “We long for love, we wish we had more time, and we fear death,” he says.

“Collateral Beauty,” in theatres today, is about the search for meaning in heartbreak and death. It’s about love being in the middle of suffering, pain and loss and this is collateral beauty.

Jump ahead a year or two. Howard has gone from being on top of the world to acting like a zombie. His hair has turned gray and he spends his days setting up hundreds of dominoes into spirals to only make them collapse across many tables. His friends and partners Whit (Edward Norton), Claire (Kate Winslet) and Simon (Michael Pena) are deeply concerned at their friend’s depression. Howard’s clients are leaving because he ignores them. The partners want to sell to an interested buyer so that all of the employees can keep their jobs. The thing is, they need Howard to sign off on the deal and he won’t come to meetings or even look at the papers they send him.

His wife has left him because their little girl has died and we find out that she loved to set up dominoes and make them fall. Things have gotten so bad at work that the partners hire a private detective named Sally Price (Ann Dowd) to follow Howard and take photos. They want to confront him with his denial of reality.

One day, Howard mails three letters he has written, one each to Love, Time and Death. Price bribes a post office official to have him retrieve the envelopes. When she brings them to Whit, he gets the idea to ask actors at a tiny theater to impersonate Love, Time, and Death and confront Howard with the very letters he has written. Helen Mirren plays Death, Kiera Knightly is Love and Jacob Lattimore is Time. One by one the actors follow and meet up with Howard who is genuinely shocked by their appearance.

Two things make the film interesting. One is the way it uses the play-within-a-play motif. The other is the sequence that shows a room filled with books. Writer Allan Loeb told me that the books are about any and all beliefs about the afterlife, but I questioned him on why the camera only focused on a book by Brian Greene that deals with the theory of “multiverses” or simultaneous realities. He said it wasn’t intentional and the story is his own creation. But that camera shot stood out for me so I googled Greene. He’s quite a prolific writer on this hypothesis.

Loeb also told me that he feels Howard’s story is a very human one. “We cannot escape death,” he said, “but hopefully we all experience love by being connected to those around us.”

This is a sincere movie. It’s presented in a unique way. It held my interest. Will Smith is especially effective as the grieving father. The film addresses grief and loneliness. It wants to be a feel-good Christmas movie, but I think that kind of happens, you cannot force that. I will say this, kudos to Loeb and his team for daring to be creative and for contributing a positive story to the cinematic universe.