A colorful expression of Good Friday faith rooted in Guatemala 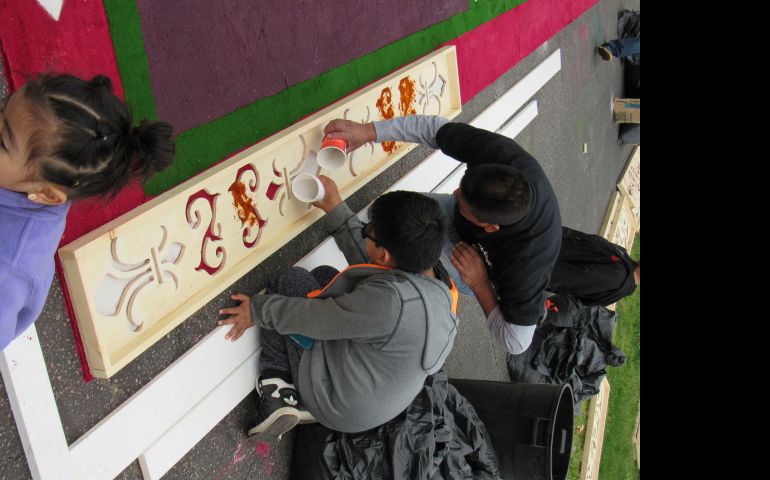 Nearing completion, workers pour sawdust into forms for the border of the carpet.

On Good Friday, a stretch of driveway at St. Camillus Parish in Silver Spring, Md., is transformed into an elaborate and colorful expression of faith that has roots in Guatemala’s western highlands.

The intricate designs of the alfombra, Spanish for ‘carpet,’ are the work of the Guatemalan community in this richly diverse parish. The group begins planning and designing in early January. The final product, a long stretch of panels depicting sacred images and made primarily of colored sawdust and white sand, is a community venture.

The actual construction begins between 5 a.m. and 6 a.m. Good Friday morning and ends around 1 p.m. Visitors view and meditate on the work throughout the day and into the evening as they attend services and a community-wide way of the Cross. But the carpet remains in place for a mere 24 hours. By Saturday evening Easter Vigil, all  that is left are a few chalk drawings and chalk lines delineating the dimensions of the carpet, which this year was 12 feet wide and about 130 feet long.

Members of the Guatemalan community who worship at St. Camillus come almost exclusively from Concepcion Chiqurichapa, a town near the major city of Quetzaltenango, said Walter Juarez, president of the Direction de la Alfombra 2017 (a chairman role that changes hands annually). He said the community decided about 10 years ago to revive a tradition that many recalled as youngsters in Guatemala. Mam, an indigenous language to that area of Guatemala, is the principle language spoken among those involved in the project, most of whom also speak English and Spanish to those outside the community.

Each year, a core committee of about 10 men meet to choose images and other elements of the design. Before the construction begins, they have collected dozens of large bags of colored sawdust and decided on other decorative elements. As the Good Friday morning wears on, the crowd of volunteer workers -- from specialists who take care of artistic details to those who work sawdust into plywood templates to youngsters learning the craft -- can swell to a hundred or more. The accompanying photographs show various stages of this year’s project, a series of scenes depicting the way of the cross and the Resurrection.

“It is our faith and devotion that make us do this, especially this time of year,” said Juarez. “And we are happy to do it.”

Part of the community observance accompanying the alfombra is construction of a simple wooden shrine around a statute of the Virgin Mary. Incense pours from a small pot in front of the shrine. The top structure is draped on all four sides with plantains, pineapples and melons. In Guatemala, explained Marvin Hernandez, one of the participants, there are often 14 such shrines erected in a given locale to represent the Stations of the Cross. They are eventually dismantled and the fruit is distributed among the community.

Boulder parent: 'Our children could be the next to go'

I saw what the church can be, during a huge parish hall party