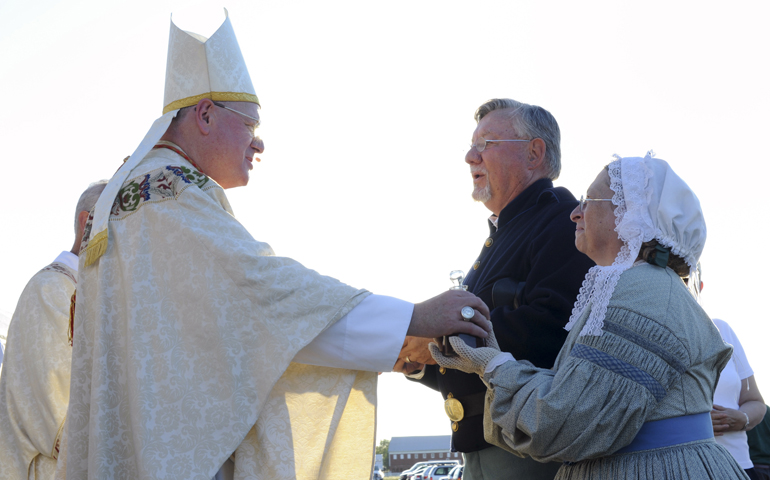 Tuesday marks the 150th anniversary of the Gettysburg Address. President Abraham Lincoln delivered the two-minute speech as part of a military cemetery dedication in the south-central Pennsylvania town that nearly five months earlier had served as the site of one of the Civil War's bloodiest battles.

To commemorate the 1863 address, filmmaker Ken Burns recruited a wide cross section of Americans -- from presidents to preteens -- to recite the famous words, part of a national campaign for all to study and recite the speech.

In other religious circles, the Daughters of Charity used the anniversary as cause to revisit letters Lincoln and his staff wrote to members of the congregation. The order -- whose Emmitsburg, Md., property housed the Union army before the battle and provided medical care for soldiers who fought at Gettysburg -- believes there is one known letter from Lincoln to a Daughter of Charity, written in September 1862 requesting a Catholic chaplain for hospitalized soldiers.

As for the recitation campaign, it is a part of Burns' latest project, titled "The Address." The film, expected to air on PBS in the spring, uses Vermont's Greenwood School -- where each year, students are encouraged to memorize, practice and recite the speech -- as a lens to explore the oration's history, context and importance.

"In his address, President Lincoln said, 'The world will little note, nor long remember what we say here,' and yet 150 years later, the students of the Greenwood School are using his momentous words to overcome adversity," Burns said in a press release. "We want to tell this story to inspire everyone across the nation, especially school children, to learn the rich history of American freedom and sacrifice embedded in one of the most important declarations ever made."

On Tuesday, Burns and his crew visited Gettysburg, where they filmed ordinary Americans reciting the address. He has also invited all Americans to join the project by providing online their own rendition of America's most famous speeches.

A separate PBS special, Lincoln@Gettysburg, premieres Tuesday night and looks at how Lincoln used the latest technologies of his time (primarily the telegraph) to connect with the country and wield his leadership and authority from afar.